JAKE PAUL revealed he held talks with Canelo Alvarez’s lawyer over a future fight and vowed to give him a “run for his money”.

Paul has long called out the Mexican superstar despite their vast skill and experience disparity.

And he claims behind the scenes, discussions with Canelo’s team have taken place.

Paul said on Anthony Pompliano’s podcast: “We’ve talked to his lawyer and I think he’s getting to a place where he sees how serious I am.

“I think at first everyone thought this was a joke and my mouth was bigger than my actions, at first.

“Now my actions are matching up to what my words are and so I think now people have to take that seriously. 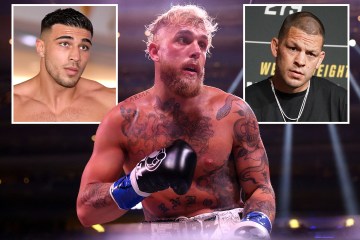 And despite the iconic Brazilian having five prior bouts in the ring, he is still yet to face a seasoned boxer.

But that could change soon as talks with Tyson Fury’s 8-0 brother Tommy, 23, to reschedule their celebrity grudge match continues.

Canelo, 32, most recently beat Gennady Golovkin, 40, in their trilogy fight but it was a performance blasted by Paul.

And it has given the YouTuber-turned boxer the confidence that he can do the unthinkable and BEAT the sport’s biggest attraction.

“So not only is it a massive fight but because of our styles and how we match up – styles make fights, right?

“But I know I can win and I’m going to give him a hell of a run for his money and that will just be an iconic fight to make.

“Just for the generations, I think it will shut the internet down and I know I can win.”

Canelo has largely ignored Paul’s wishful callouts but warned not to completely rule it out.

He said in May: “Maybe in two years we could talk about that. Maybe [the fans] would love me for knocking him out.

“I hope he gets a lot better and does a great job. I hope he takes it seriously.”

2022-12-02
Previous Post: A Swiss-style Brexit deal is unlikely unless things change dramatically within the Conservative Party
Next Post: Overweight women may be at highest risk of long COVID – new research