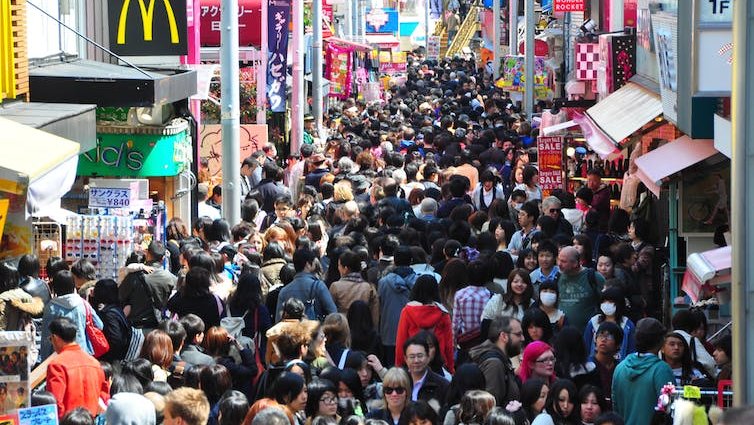 When I was a teenager, the 1980s felt like a decade of disasters. We watched a terrible human cost being paid live on TV in a series of football-related disasters.

I saw bodies stretchered away on advertising hoardings at Hillsborough stadium in Sheffield, the back-and-forth terrace skirmishes at Heysel in Brussels that prefaced a fatal crush, a man walking calmly out of the burning stand at Bradford, his entire body ablaze. Crowd catastrophes dominated my youth.

Much of my work as a computer scientist has focused on modelling complex systems made up of many interacting components. These may be DNA molecules, bacteria in a dish, social insects, or even people.

Decades after Hillsborough, after working at the University of Liverpool and hearing first-hand accounts of the horrors of that day, my colleagues and I turned our attention to the problem of crowd crush. Our first paper on this topic considered how we might detect crush in computational simulations of crowds.

Over the past decade, I’ve spent a lot of time thinking about one fundamental question: what’s wrong with our understanding of crowds? The answer, it turns out, is a lot.

This was highlighted, once again, by the recent tragic events on Halloween in Seoul, South Korea. The death toll stands at 156, with hundreds more injured, and the investigation is still under way. But this disaster brings several important points into sharp focus.

South Korean authorities have already admitted to failures, but this is relatively unusual. Apart from the potential legal ramifications, it’s not always obvious who has responsibility for keeping crowds safe, as in Seoul, where a crush happened outside the context of an organised event.

A year after the Astroworld, Texas, incident in which 10 people died, arguments are still raging about who was responsible. Although South Korea, like many other countries, has guidelines for the planning and safe delivery of large events, this carries with it the assumption that there will be an identifiable organiser.

That wasn’t the case in South Korea. Police were deployed to perform their usual traffic, crime and public order functions, but there appears to have been no high-level plan in place to deal with a large influx of people into the Itaewon district, and early warning signs were either missed or ignored.

Proper planning is absolutely key to public safety. Authorities need to anticipate potential risks, not just for specific events, but wherever large numbers of people are likely to gather. Calculating the safe capacity of spaces, anticipating crowd flows, dynamically assessing the size of crowds and ensuring that safe capacities aren’t exceeded on the ground are the bare minimum that should be done.

Fundamentally, it’s important to learn from previous incidents, and ensure that put proper plans are always in place. It will be difficult and expensive, but the cost of doing nothing is far worse. So long as people want to gather in large numbers, there will be risks, and we cannot afford the luxury of simply hoping for the best.

Many media outlets automatically referred to the incident as a “stampede”. This is one of the most persistent misunderstandings about the crowd. It brings to mind a herd of animals, and we’re almost conditioned into thinking that when a crowd disaster happens, it’s because people panic and trample on others in a desperate race to escape from something.

But that hardly ever happens. Stampede is a massively problematic term, both because it’s inaccurate, and because it implies that victims are somehow to blame. And it contributes to the ongoing “panic” myth that crowds are somehow “mad, bad, and dangerous to know”.

Unfortunately, it’s likely that another disaster on the scale of Seoul will happen in the near future. As life becomes increasingly urbanised, we need to understand the crowd more than ever.

Some projections claim that, by 2030, 60% of the world’s population will live in cities. Already a commuter nation the size of Sweden and Portugal combined flows in and out of Tokyo every working day.

As more people move into cities, we will have to think hard about how people move around and how they should be safely managed. Urban design and planning processes already embed insights from crowd science but, more broadly, societies also need a much more integrated approach to crowd management.

We need to understand groups of people as complex, dynamical systems made up of human “parts” interacting with one another and with their environment, and move beyond the tired narratives of “mob”, “stampede” and “panic” that unfortunately still dominate discussions of crowds. This will require further support for an inter-disciplinary approach that draws on physics, computer science, social psychology, sociology, criminology, policing and politics.

Our wider society needs to understand crowds much more deeply, in terms of how they work on a social level, how they can make our cities more enjoyable places to live, and how they can bring with them resilience, security, and improvements in wellbeing.

Martyn Amos has previously received funding from the Arts and Humanities Research Council for a project on enhanced evacuation drills.