XBB and BQ.1: what we know about these two omicron ‘cousins’ 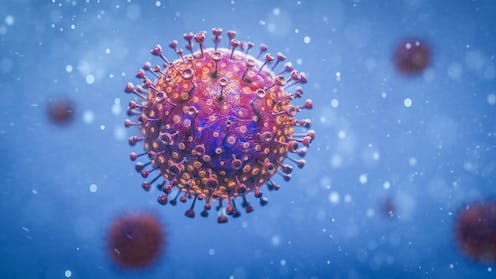 In late October, the UK Health Security Agency assigned variant designations to two new omicron “grandchildren”: BQ.1 and XBB. This means they will be monitored by health authorities, but are not at this stage regarded as variants of concern.

If we think of the omicron variant as a family tree, BA.2 (the dominant strain in the UK in spring of 2022) is the parent of BA.5 (the variant currently dominant in the UK) and the grandparent of BQ.1. In other words, BQ.1 is a sub-lineage of BA.5.

A hybrid variant is created when two different sub-variants combine and swap parts of their genetic material. We’ve seen this happen with the coronavirus before, indicated by a variant name beginning with an “X” (like XD, XE and XF).

But what can we make of these variants? Are they cause for concern? Let’s take a look first at how they’re spreading.

In the UK, Europe and North America, the prevalence of BQ.1 is rising quickly. Recent data from the UK’s Office for National Statistics (ONS) estimated BQ.1 sub-lineages (including BQ.1 and the similar BQ.1.1) made up 16.7% of infections. In the US, BQ.1 and BQ.1.1 together make up around 35% of infections.

XBB seems to be more prevalent in Asia. While the ONS data suggests it makes up only 0.7% of infections in the UK, in Singapore some 58% of recently sequenced cases are XBB. But whereas sequences of XBB are increasing globally, XBB cases in Singapore now appear to be starting to fall.

Scientists are closely watching several regions where both variants are circulating to see which has the competitive edge.

Read more:
Omicron XE is spreading in the UK – a virologist explains what we know about this hybrid variant


What are the differences between BQ.1 and XBB?

Omicron variants are successful due in part to several shared mutations in the receptor-binding domain of the spike protein (a protein on the surface of the virus which allows it to attach to our cells).

A key difference between BQ.1 and XBB is the number and location of mutations in the receptor-binding domain. This part of the protein is required for the virus to infect our cells, and is also the target of antibodies which are an important part of the immune response.

A recent preprint (a study yet to be peer-reviewed) suggests that mutations within the receptor-binding domain can help XBB escape neutralising antibodies generated by COVID vaccines or infection with earlier omicron offshoots, including the parent strains BA.2 and BA.5. This preprint regards XBB as one of the most antibody-evasive coronavirus strains we’ve seen.

Cornelius Roemer, a computational biologist in Switzerland, has suggested that a number of these specific changes in the receptor-binding domain can increase the virus’s growth efficiency, or “fitness”. The idea is that more changes allow it to attach to human cells more strongly, giving it a better chance of infecting that cell.

According to Roemer’s model, BQ.1 is a level-5 variant, with five mutations from a list of 21 key mutations which increase SARS-CoV-2’s ability to strongly attach to human cells. XBB is currently the only variant at level 7, with seven of the 21 key mutations.

At the moment this is just an observation and hasn’t been formally published or peer reviewed. However, other scientists have also noted XBB’s apparent growth advantage over other variants.

Read more:
What are the symptoms of omicron?


But it’s not just mutations in the receptor-binding domain that could give XBB an edge. XBB has mutations in another part of the spike protein called the N-terminal domain as well.

The immune system also targets the N-terminal domain with antibodies, and people who have recovered from BA.2 and BA.5 infections mount especially strong immune responses to this part of the spike protein. Preliminary evidence suggests XBB is very effective at evading these antibodies too. This means that previous infection with BA.2 or BA.5 might not protect you from XBB.

Should we be worried about XBB?

By these metrics, XBB is potentially more immune evasive than BQ.1 and its parent BA.5, and might have a growth advantage which could increase virus spread.

The good news is that based on Singaporean data, XBB has been estimated to have a 30% lower risk of hospitalisation compared with BA.5. But we don’t yet have data to support this from other countries, so this might change as XBB becomes more widespread.

It is possible that we could face a double wave of infections in the UK – a wave of BQ.1 infections from Europe and the US, before a second wave of XBB from Asia. And we don’t know if BQ.1 will offer any protection against XBB. Only time will tell whether XBB will outperform BA.5 or BQ.1, or if another variant is waiting in the wings.

Vikki Easton has previously received funding from the BBSRC, MRC, Wellcome Trust, Cancer Research UK and GCRF. She is affiliated with the University of Leeds and is a member of the Microbiology Society.

2022-11-11
Previous Post: We tested Einstein’s theory of gravity on the scale of the universe – here’s what we found
Next Post: Ready for anime Grogu? Studio Ghibli and Lucasfilm tease collaboration