Ukraine recap: the battle for Kherson could determine the outcome of this war 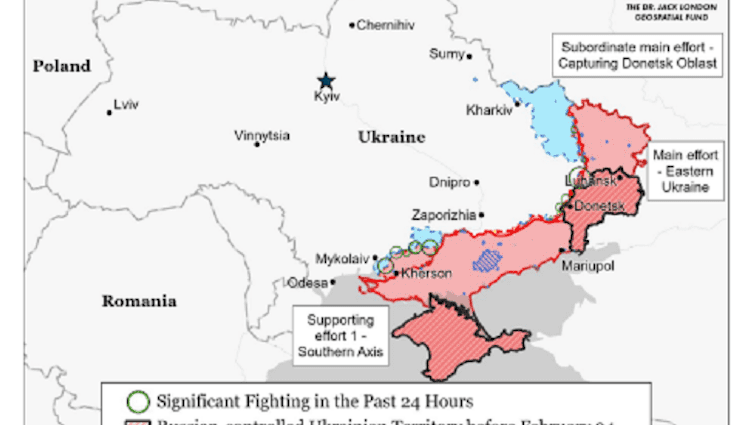 The conflict in Ukraine appears to have reached another key moment that has the potential to influence the course of the rest of the war. Ukrainian troops, who have been sweeping through the south of the country since September appear poised to recapture the city of Kherson.

Russia’s military commander in Ukraine, General Sergei Surovikin, announced on November 9 that, due to the difficulty of supplying forces holding Kherson, troops would withdraw across to the western bank of the Dnieper river. Civilians have been evacuated, some apparently unwillingly. (Kyiv has complained of “forced deportations”.)

Now the question is how and when Ukrainian troops will begin their assault on Kherson proper. Christopher Morris, an expert in military strategy at the University of Portsmouth, says there are fears among Ukrainian commanders that this may be a way of trying to entice their troops into a situation of urban warfare, for which the butcher’s bill would be terribly high. But this cuts both ways, writes Morris, who points out that Russian commanders would have painful memories of the battle for Grozny in Chechnya in 1995.

À lire aussi :
Ukraine war: Russia pulling out of key city of Kherson – what it means for the conflict


However, if Ukraine manages to recapture Kherson, it’ll be a victory with huge symbolic and strategic importance. Kherson was captured by Russian forces on March 1, less than a week after the war began. The region it sits in is one of four annexed by Russia after “referendums” were hastily arranged at the end of September.

Matthew Sussex, a fellow in the Strategic and Defence Studies Centre at the Australian National University, says the loss of Kherson would be Vladimir Putin’s “most humiliating defeat yet”. He believes it would open up the way to Crimea, and also ring the death knell even for the Russian president’s revised war aim. Since taking Kyiv had been ruled out, Putin has tried to establish a land bridge across the bottom of the country from the Donbas, essentially turning Ukraine into an unviable country with no access to the Black Sea.

Losing Kherson could also destabilise Putin at home, writes Sussex, reflecting on the fact that the Russian president has been scapegoating the military for the failures. “The inherent vulnerability of autocrats like Putin is they can only blame the most heavily-armed portion of society for so long,” he says.

Away from the frontline

Putin may appear to be increasingly isolated at home, just as his country is internationally. Yet relations with longtime ally Serbia grow ever closer. Despite being a candidate member of the EU, Serbia has resisted calls to impose sanctions on Russia. Instead the two signed an agreement in September to “consult” each other on foreign policy issues. They also signed a new three-year gas contract in May, and Serbia’s state-owned airline, Air Serbia, has doubled the number of flight between Belgrade and Moscow.

Andi Hoxhaj, a lecturer in European Union law at UCL with a particular interest in the Balkans, believes this has a great deal to do with Serbia’s ambitions in Kosovo, where tensions are increasing again. There have been sporadic outbreaks of unrest among ethnic Serbians in the north of Kosovo. And the Serbian president, Aleksandar Vučić, recently warned that Serbia could intervene in Kosovo to “protect” ethnic Serbs living there.


One feature of covering a story which can shift daily is what former UK prime minister Harold MacMillan referred to as “events, dear boy”. Within hours of sending out last week’s newsletter about Russia’s decision to pull out of a deal to allow Ukraine to safely export grain, Putin performed a U-turn and said Russia would renew the agreement.

Stefan Wolff, an expert in international security at the University of Birmingham, has updated his story, which you can read here. As a result, grain prices, which had risen by 6% in response to Russia’s announcement it would pull out of the deal, immediately begin to fall again. But, as Wolff points out, Putin has put the world on notice that he could renege on the agreement at any time – with potentially disastrous consequences.


And while we are on the subject of aid, the UN high commissioner for refugees announced this week that the number of refugees created by Russia’s invasion has risen to 7.8 million people. A further 7 million have lost their homes and are struggling with acute shortages of food, water, shelter and other basic needs.

The international response has been remarkable, with the “Stand Up for Ukraine” global pledging campaign raising US$8.9 billion (£7.6 billion). Meanwhile, the US alone has committed US$18.2 billion in security assistance. Tazreena Sajjad, an expert in global governance, politics and security at the American University School of International Service, points out that – as a result – other humanitarian crises around the world are receiving less attention and assistance than they need.

This is creating what she refers to as an “aid void” in countries such as Bangladesh, Myanmar and Ethiopia. And, she says, many countries are actually diverting aid and assistance earmarked for other crises. This, coupled with rising food and fuel prices, could have devastating impacts on the lives of millions.

À lire aussi :
Generous aid to Ukraine is diverting resources away from other refugee crises around the world