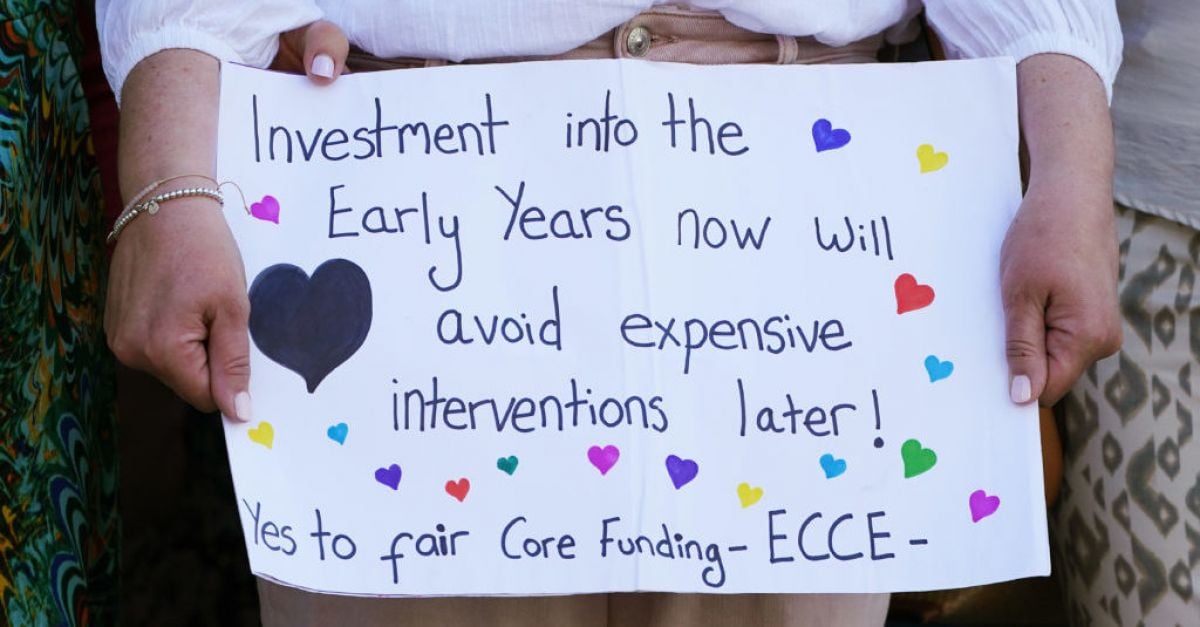 Hundreds of childcare providers across the country are expected to close in protest at what they say is an inadequate funding model, leaving thousands of parents without childcare provision.

The providers say they have been marginalised by the new model, announced by the Government this year, which has not helped them pay mounting costs.

The Federation of Early Childhood Providers (FECP) said around 500 of its members funded through the Early Childhood Care and Education (ECCE) scheme will take part in Friday’s closures.

Providers said they feel they have no option but to take the action, with a possibility of “rolling” closures in the run-up to Christmas.

As hundreds of members mark their 4th protest by closing their preschool doors this Friday 11th November, take a look back at our last demonstration. The size of this next protest won’t be a surprise to anyone in @dcediy @rteliveline https://t.co/pH8EeQcHre

Minister for Children Roderic O’Gorman, who introduced the childcare funding model, said the protests are “unwarranted”, and that the first year of this model is “a first step”.

“I think it’s really disappointing that the closures are going ahead today and I believe that these closures are unwarranted,” he told RTÉ’s Morning Ireland.

“Government, and myself as minister, we’ve prioritised investment in childcare and Budget 2023 will see for the first time ever over €1 billion being spent on childcare.

“That’s just the first year of core funding and that is recognising that there has been some very significant under-investment in childcare over decades in Ireland.

“And for ECCE-only services, the services were probably focusing on today; last year, between the higher capitation programme support payments, they would have gotten total 14 million.

“This year through core funding, they’ll be receiving 27 million, so a 13 million euro increase to the ECCE-only services.”

The minister said that, in the second year of the funding model, there will be “28 million more to support services”.

“I would ask that they withdraw the threat of the second day of closures later on this month because I think that’s unfair for parents, it’s unfair for the children who are impacted.”

2022-11-11
Previous Post: Ukraine war: Russia pulling out of key city of Kherson – what it means for the conflict
Next Post: Golden Boot winner: Get Cristiano Ronaldo at 20/1 to scoop 2022 World Cup award