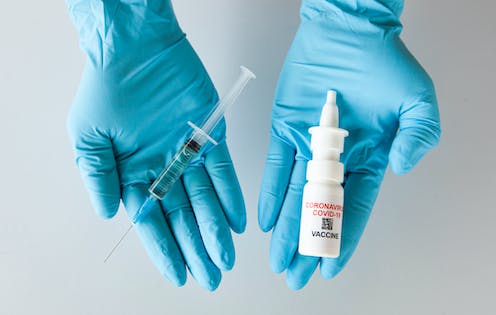 As the pandemic continues, many countries are rolling out COVID booster vaccines. In the UK, the autumn booster campaign is offering a fourth dose to those at higher risk from a COVID infection, including people with certain underlying medical conditions, and those aged over 50.

The autumn booster shots are bivalent vaccines, meaning they target the original strain of SARS-CoV-2 (the virus that causes COVID-19) alongside the omicron variant.

These vaccines are effective at topping up and broadening our immunity. But we expect that, as we’ve seen with the original COVID shots, the protection they provide, particularly against becoming infected, drops off in the months afterwards.

So we need to consider a vaccine strategy that will provide longer-term immunity. A new kid on the block – mucosal vaccines – could offer promise on this front.

Mucosal vaccines are delivered in your nose or throat, as sniffable or inhalable formulations. They may sound new but actually we’ve been using them for years to vaccinate against diseases such as flu.

While conventional needle-in-your-arm vaccines induce a more systemic immune response, mucosal vaccines do something different. Viruses such as SARS-CoV-2 enter our systems via our nose and mouth when we breathe in small virus-containing droplets. This means immunity in our nose, mouth and throat really matters to stop infections.


Mucosal immunity may also be better at getting our immune system to remember SARS-CoV-2. Memory cells are specialised long-lived immune cells that remember the virus and carry instructions for our immune cells to be quickly deployed if it attacks again. Systemic vaccines are not so good at activating the memory cells in our nose and throat, but mucosal vaccines are.

Meanwhile, the fact that mucosal vaccines work locally could mean a smaller dose is needed. This, coupled with less stringent storage requirements compared with some conventional vaccines, may mean mucosal vaccines could be deployed more efficiently in resource-poor countries and be an important tool for vaccine equity.

Mucosal vaccines would probably also be a lot more appealing to those with needle phobias. Roughly 26% of the UK population admit to being afraid of needles, with the highest rates of phobia seen in youth, black and Asian groups – groups we know have lower vaccine uptake and more vaccine hesitancy.

The advantages are clear – but what does the evidence say?

Several mucosal vaccine candidates are being explored in pre-clinical and clinical trials. Results just published on a nasal booster vaccine in mice showed that robust mucosal immune responses were induced in the nasal and upper respiratory tracts.

Similarly encouraging results have been reported in macaque monkeys and hamsters. Several trials are underway to see if these results can be replicated in humans.

Iran, Russia, India and China have already introduced mucosal vaccines despite published data on their candidate vaccines remaining sparse. But some data has been publicly released.

Results from phase II human trials of an inhalable vaccine, now being rolled out in China, were released as a preprint (a study yet to be peer-reviewed). While the study didn’t assess mucosal responses, it did show that systemic antibody levels were higher and remained higher over the six months assessed compared with a conventional booster.

But the picture is mixed. A phase I trial of a nasal formulation of the Oxford AstraZeneca vaccine showed little to no induction of mucosal immunity and weaker systemic antibody responses compared with a conventional vaccine.

Read more:
Needle phobia could be the cause of 10% of COVID vaccine hesitancy in the UK – new research


The reasons for these disparities are not clear, but they could include the method of delivery. The administration of mucosal vaccines requires precise engineering and aerosol science to ensure the small droplets containing the vaccine are easily inhaled.

Several strategies have been used to deliver mucosal vaccines including nebulisers (a machine that turns liquids into a fine mist that can be inhaled), nasal sprays and inhalable devices like the inhalers asthmatics commonly use.

The particle size, formulation (the ingredients and how they’re combined), as well as the vaccine’s ability to stick to and enter our cells will all affect how effectively the vaccine particles are taken up in the body. This is called the vaccine’s “bioavailablity”. We still have a lot to learn about which delivery strategy is optimal for which vaccine.

So where does this leave us?

This pandemic is still very much ongoing. And we’re learning more all the time about the long-term implications of COVID infections on our health, including heart complications and long COVID.

This, coupled with the emergence of ever-more persistent variants, mean it’s important to keep protecting ourselves and our loved ones from the worst effects of the disease. Vaccines are some of the best weapons we have.

It will be important to watch and learn from the mucosal vaccine rollout in other countries and scrutinise their data when it’s released.

Meanwhile, given the urgent need for long-term vaccines, it would seem prudent to invest in strategies, not just for the development but also the manufacture of such vaccines. They could be an invaluable tool in this pandemic, but also against many other infections, including those we have yet to encounter.

2022-11-08
Previous Post: What’s coming to Disney+ in November? The new TV series and films to watch from See How They Run to Willow
Next Post: Doctors missed the cause of my headaches for 3 years – now my little girl faces life without her daddy