MANCHESTER UNITED will have to beat Barcelona for a place in the Europa League round of 16.

Erik ten Hag’s side were handed a horror play-off tie against the Spanish juggernauts.

The Red Devils must negotiate a play-off against Barca after finishing second in their group to Real Sociedad.

Ten Hag did manage to avoid an emotional reunion with former club Ajax.

But United weren’t kept away from European giants Barcelona.

The play-off first legs are scheduled for February 16, with the return leg a week later on February 23.

The draw for the round of 16 will then take place on February 24, where Arsenal will be in the hat after qualifying as group winners.

THIS IS A DEVELOPING STORY…The Sun is your go to destination for the best football, boxing and MMA news, real-life stories, jaw-dropping pictures and must-see video. 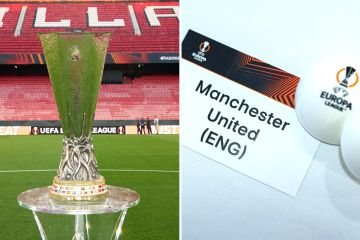