Girls are held up as figureheads of political change, but they don’t want to do it alone 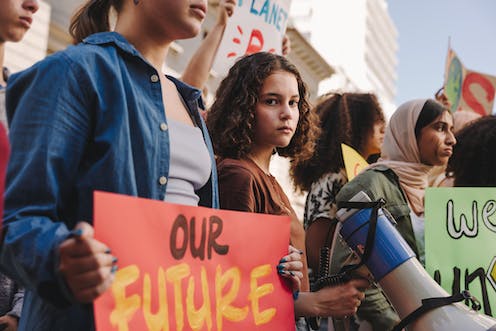 Girls are at the centre of global movements for indigenous rights, climate justice, gender equality and civil rights. Educational activist Malala Yousafzai was awarded the Nobel peace prize at 17.

Greta Thunberg has inspired millions of her peers to campaign for climate action: she began a series of school strikes when she was 15. Iranian and Afghan girls are taking to the streets to demand their rights to an education and basic freedoms.

But our understanding of girls’ involvement in politics is still limited, and their opportunities to participate are all too often tokenistic.

Girls have historically been excluded from most political institutions and movements because of both their age and their gender. While all children and young people are excluded from voting in elections and standing for government, girls and young women have to deal with the additional barrier that politics is still seen by many as a “man’s game”.

Around the world, women still make up just 21% of government ministers and 26% of parliamentarians. Perhaps that is why research shows that girls and young women who are already involved in community organising and activism are reluctant to describe themselves as “political”.

But girls are leading political change – whether on the world stage or in their own communities. In research with girls across nine different countries, my co-authors and I found that girls are taking part in everyday acts of resistance, winning a bit more freedom for themselves and their friends as they navigate their way through childhood.

Girls push back against inequalities in their communities, challenge unfair rules that stop them from doing everything their male peers are able to and demand fairer treatment from parents and elders.

They set up girls’ rights or feminist clubs in schools and take action on issues they care about, even though they often experience stigma for doing so. And, of course, girls take part in, or even lead, global political movements.

One 2019 study found that daughters were particularly good at convincing their parents of the evidence that our climate is changing as a result of human activity. The increase in climate concern was most dramatic among fathers and conservative parents. So, we know that girls are not just politically active, but that they are also effective political communicators.

But UK media coverage of girls’ activism still often misses the mark. I analysed UK media representations of Malala Yousafzai in the aftermath of her shooting by the Pakistani Taliban. I found that she was often portrayed as younger than she was and as a helpless victim of forces beyond her control.

Despite the fact that Yousafzai had been campaigning and blogging for some time, speaking out even after threats to her life, almost nine times out of ten, the newspapers in this study quoted somebody else’s words in explaining her story and its significance.

While there is also plenty of positive media coverage of girl activists, it often risks presenting the issues they are campaigning on as already solved. Greta Thunberg is calling for adults to urgently address climate change, but media coverage of her activism can adopt a reassuring tone, focusing on Thunberg herself and her amazing qualities, or her ability to inspire millions of other youth activists like her.

As she raises the alarm about the need for urgent action, many adults see her as evidence that everything is going to be OK. As Thunberg said in a 2019 appearance at the UN: “You all come to us young people for hope? How dare you?”

For more than two decades now, we’ve seen international institutions, governments, NGOs and transnational corporations embrace the idea of girl power. Everyone from Nike to the World Bank has been keen to tell us of the importance of investing in girls, so that they can fulfil their spectacular potential.

The narrative goes that if you educate and empower a girl, she will go on to use that education for the better of humanity. Girls, we are told, will save the world.

But girls don’t want to save the world all by themselves. Nor should they have to. The issues they care most about are not problems of their making.

Girls need more meaningful opportunities to participate in decision-making, and they need adults to resist the temptation to feel reassured that young people have got the most important issues under control. They need support in their efforts at organising, because they still face so many barriers in terms of funds and platforms to speak from.

As has been shown in Iran and Afghanistan in recent weeks, girls are phenomenally brave in standing up to the injustices they face. But they shouldn’t have to do it alone.

Rosie Walters receives funding from the Economic and Social Research Council. She is a member of the Women's Equality Party and an academic advisor to Plan International.

2022-11-07
Previous Post: Lab-grown blood given to humans in world-first trial aimed at combatting rare disorders
Next Post: Rising interest rates: why the Bank of England has increased rates again and what to expect next