Five players PSG could swoop for to replace Messi including Salah

PSG have a number of players on their radar who could replace Lionel Messi if he does depart for America.

Reports have emerged that the 35-year-old could be set for a shock move to David Beckham’s Inter Miami after the World Cup.

The Argentine is in his final year with Paris Saint-Germain but has been linked with a sensation return to Barcelona.

If he did depart, it would leave PSG needing to replace one of their superstars with another big name.

The French club have been linked with the most exciting players in the world and could now be weighing up a big move amid Messi’s potential exit.

Sunsport has looked at the players who could be of immediate interest to bosses at the Parc des Princes. 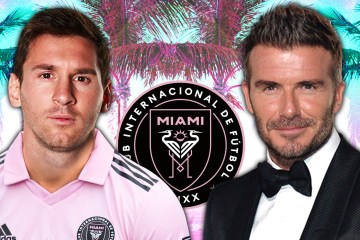 The Liverpool star has been for many years one of the most consistent and dangerous forwards in Europe.

While the 30-year-old signed a big money contract extension in the summer to strengthen Liverpool’s position, PSG have financial muscle few can match.

The Reds also showed with the departure of Sadio Mane last summer that they are willing to listen to offers for even their biggest stars.

And PSG have been reported as being very interested in the Egyptian forward previously.

The Arsenal ace has really come to the party this season. The table-topping Gunners have seen the Brazilian become a far more effective and consistent player in this campaign.

And at 21-years-old, Martinelli still has several years left him to grow even further into a superstar.

While PSG tend to sign the more established names, a move for Martinelli could help reduce the risk of further destabilising the dressing room.

The club has been plagued all season with rumours of a rift between Kylian Mbappe and Neymar and signing another big name could potentially contribute to the unease.

The return to form of Marcus Rashford could reignite rumours of the forward completing an incredible switch to France.

The home-grown Manchester United hero has long been of interest to PSG, with reports even indicating that Mbappe was personally keen on Rashford joining.

With a new manager to keep impressing and his World Cup place in the balance, the 25-year-old has plenty of other things on his plate.

But whether he could resist a huge January move to play alongside the likes of Mbappe remains to be seen.

Rafael Leao is one of the hottest stars in the world at the moment and the fight to land his signature will only intensify.

The attacker was key in AC Milan’s title triumph last season and has kept that irresistible form up this season.

Chelsea are known to be well in the hunt for the 23-year-old but reports earlier this month indicate they could have big competition.

PSG are believed to have identified him as a potential replacement for Messi or Mbappe and are monitoring him.

The 33-year-old striker represents a different option for the Parisian club. While the others on this list are either at the peak of their powers, in great form or over-performing at a young age, Pierre-Emerick Aubameyang would be more of a safe pair of hands.

The Gabon striker has moved to Barcelona and Chelsea this year and managed to make an impact with his goalscoring abilities on both occasions.

Aubameyang could present a short-term option if the others don’t work out and ESPN report that the French club have been eyeing him recently.

The striker has also previously worked with the PSG boss Christophe Galtier when the pair were at Saint Etienne together 10 years ago.

2022-10-31
Previous Post: Mathieu Flamini Has a Plan to Decarbonize the Chemical Industry
Next Post: Omicron BQ.1 and BQ.1.1 – an expert answers three key questions about these new COVID variants