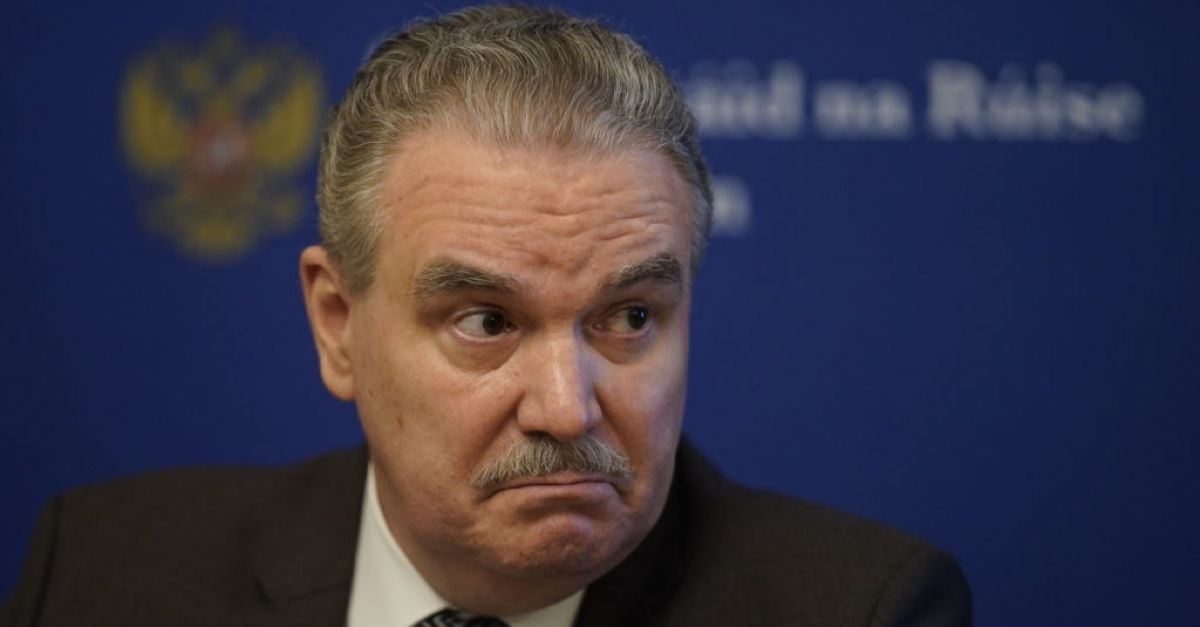 Comments from Russian ambassador Yury Filatov about Ireland’s role in demining in Ukraine should not lead to his expulsion, but the presence at the Russian Embassy in Dublin should be reduced, according to a TD.

Cathal Berry, a former deputy commander of the Army Ranger Wing, told BreakingNews.ie: “It just shows how bad things are for Russia when they’re trying to push back on something as small as this. They’re being humiliated in Ukraine, they’re getting really concerned and Yury’s statement indicates how concerned they are.

“It’s great that Yury is still in Ireland I think, because it reminds the public every so often of how devious, duplicitous and mendacious the regime he represents in the Kremlin actually is.”

On Thursday, Mr Filatov issued a statement claiming Ireland would be directly involved in the war in Ukraine over upcoming involvement in demining training for Ukrainian soldiers.

Minister for Foreign Affairs Simon Coveney has confirmed the Defence Forces will take part in the programme.

Mr Filatov’s statement read: “There is no way around the fact that by engaging with Ukrainian military, be it on mines or otherwise, Ireland would clearly be involved in the ongoing conflict in a direct way.

“The Taoiseach is quoted as saying that Ireland is taking part in the EU training mission for the Ukrainian army following a request by the Kyiv regime to help with demining, given the Irish expertise in that. There is a lot of ambiguity involved.

“Training in demining is not entirely a defensive and peaceful activity — as any military expert would confirm, this process involves learning the process of laying mines as well.”

If he is against something Ireland is doing, that is proof we are on the right road.

This is not the first time Mr Filatov has made controversial comments relating to the war, and it led to renewed calls for him to be expelled.

Mr Berry feels this would achieve little, pointing to the fact that diplomatic ties between Ukraine and Russia are still open.

However, he said the number of personnel at the Russian Embassy on Orwell Road in Rathmines, Dublin, should be greatly reduced.

He pointed to concerns about spying.

“Diplomacy is important all the time, but particularly during times of conflict. Even the Ukrainians and the Russians are talking directly, you see prisoners exchanges taking place. There should be a diplomatic presence in Dublin but not a spy centre. All this information is being given to Yury by the people working for him… they are not all typists and gardeners. Basically it is further proof how humiliated Russia is in relation to their performance in Ukraine, that something as small as this has them agitating to put a stop to it.

“It just shows Ireland can have a lot of impact on the world.”

He added: “There are probably three or four diplomats in the Russian embassy, that’s more than enough to maintain diplomatic consular relations, but anything above that you know exactly what they’re doing. They’re not involved in any diplomacy, in fact they’re involved in hybrid information and spy operations. It should be scaled back… the number of Russians in the embassy in Dublin should match the number of Irish diplomats in Moscow.

“Yury Filatov… I knew him well long before he became a household name here, he was in front of the Foreign Affairs Defence Committee twice, lying through his teeth basically. If he is against something Ireland is doing, that is proof we are on the right road. A good rule of thumb is if Yury Filatov is speaking against something Ireland is doing, that confirms Ireland’s actions are legitimate, ethical and appropriate.”

Mr Berry has consistently called for Ireland to send unused Javelin anti-tank missiles to Ukraine, and he still believes it should be done without affecting our policy on neutrality.

“Ireland’s traditional policy of neutrality was conceived in 1939 when World War Two broke out. What it meant was we wouldn’t involve ourselves in the war, wouldn’t join a mutual defence clause, but we would cooperate extensively with the Allied powers and our neighbours from a military point of view.

“Ireland gave massive support to Britain during World War Two, and that’s what we’re doing, we’re continuing our traditional policy of neutrality where we don’t join a mutual defence clause but cooperate extensively with our neighbours and partners across the continent. Not only is this not an issue for neutrality, not only is it entirely consistent with it, it is a continuation of our traditional policy of neutrality.”

Ireland’s upcoming involvement in the demining programme was the subject of a heated debate in the Dáil this week, as People Before Profit TD Paul Murphy claimed it would “drive a coach and horses through what is left of the idea of neutrality”.

Taoiseach Micheál Martin replied: “The deputy has turned that into an attack on neutrality. It makes my blood boil.

Mr Berry said: “Just because a comment is made in the Dáil does not mean the best interests of the Irish public or Irish State are served by it… some TDs in the chamber have a greater affinity for political ideologies in jurisdictions outside our own.”

2022-10-30
Previous Post: The Election That Saved the Internet From Russia and China
Next Post: How Man Utd will line up against West Ham with Cristiano Ronaldo and Harry Maguire fighting for spot in Ten Hag’s XI