JACK GREALISH hit out at Graeme Souness and other pundits after the Scot claimed he cannot handle criticism.

The row between the pair began after Souness claimed Grealish was “a good, not a great player”.

Grealish responded by claiming the Sky Sports pundit has an agenda and is always criticising him.

In return Souness advised the Manchester City star not to be so “precious”, adding that it is not possible to “be critical of the modern player”.

Grealish feels that is an unfair label and believes players should be able to respond to criticism without judgement.

In an interview with L’Equipe he said: “I often feel like I just do exactly the same things as the other players, but people talk about them because it is me doing them. 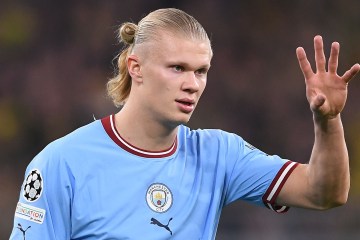 “That’s exactly what I said in relation to Souness – he always has something to say about me. And he responded by saying I can’t take criticism.

“Today, we, the footballers, if we allow ourselves to respond to something said about us, we are portrayed as if we are people who cannot stand criticism.

“Sometimes I want to say to them [pundits in England], “Leave me alone a bit and focus on someone else” so that I can focus on my game. Because there is always this noise around me.”

Grealish also explained why he is yet to hit his best form at City, revealing he had a lot to learn under Pep Guardiola.

He added: “I thought it’d be easier [integrating into City’s set-up], that this was just football, after all.

“In reality I’ve had to adapt to a new club, new manager, new team-mates… I also had to integrate what Pep [Guardiola] was expecting.

“At Villa, I was in theory playing on the left, but in matches, I was authorised to change position if I felt it necessary. With Pep, it is different. He tells me to feel free, but in a structured shape, with a precise position on the pitch.

“At Villa I was captain and I’d been there for seven years [in the first-team]. I knew everyone in a club where a majority of English players were playing.

“At City, I arrived in a dressing room with a lot of different cultures and nationalities, including the staff and physios. Therefore, I took some time to adapt to this new environment, that I really appreciate.”

2022-10-28
Previous Post: What is the difference between a populist and a dictator? The ancient Greeks have answers
Next Post: COVID vaccines don’t just benefit physical health – they improve mental health too