Scottish independence: how Nicola Sturgeon’s pledge to rejoin the EU could impact a referendum vote 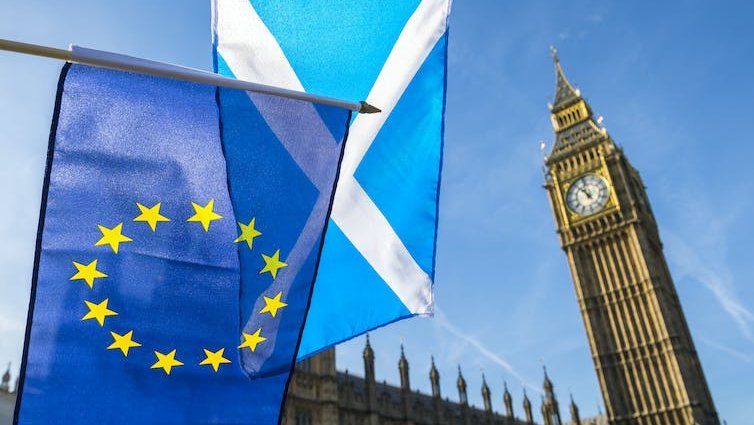 In its new white paper on the economics of independence, the Scottish government made it clear that rejoining the EU was central to its vision of how Scotland could prosper outside the UK. Rather than simply being a question of whether Scotland should be part of the UK, the first minister, Nicola Sturgeon, framed the choice facing the country as being “outside the UK, but inside the EU”, versus being “inside the UK but outside the EU”.

In short, any future referendum on independence would be as much about Brexit as it would be about Scotland’s relationship with the rest of the UK.

This, perhaps, is not surprising. After all, in the EU referendum in June 2016, Scotland voted 62% to 38% to remain in the EU. Polls suggest that support for being part of the EU is even higher now. Meanwhile, from the SNP’s point of view, the outcome of the Brexit referendum provided the clearest possible illustration of their claim that, as part of the UK, Scotland is at risk of having its “democratic wishes” overturned by the less progressive views of voters south of the border.

The question of whether Scotland could rejoin the EU if it left the UK was much debated in 2014’s independence referendum (the Yes side said it would, the No campaign that it would not). At that point there did not appear to be a strong link between voters’ attitudes towards the EU and their attitudes towards independence. According to the Scottish Social Attitudes survey, 49% of voters with a sceptical outlook towards the EU (that is, they either thought that the UK should leave the EU or that the EU’s powers should be reduced) voted for independence. Only slightly fewer – 44% – of those who thought the EU should remain at least as powerful as it was voted the same way.

This pattern was also reflected in how people in Scotland voted two years later in the EU referendum. According to the British Election Study, the level of support for Remain among those who voted Yes (62%) two years earlier was much the same as among those who had backed No (60%).

Since the early 1990s, the SNP’s vision of independence has been one of Scotland in the EU. Yet there has always been an element of the party’s support that wished to avoid both the constraints of EU membership, as well as the limitations created by being part of the UK.

What has changed since 2016

After the Brexit referendum, some voters began to reassess their attitudes towards independence in light of the decision to leave the EU. As the SNP anticipated, some who had voted No in 2014 and Remain in 2016 switched to backing independence. But these were counterbalanced by some who had voted Yes in 2014 but Leave in 2016, switching in the opposite direction to support Scotland remaining in the UK.

There was no immediate change in the level of support for independence following the EU referendum. But gradually, a link emerged between attitudes towards independence and backing for being part of the EU. By 2017, Scottish Social Attitudes was finding that 49% of those who were in favour of remaining in the EU were also in favour of independence, compared with just 41% of those who backed Leave.

By the time of the 2019 survey, by which point it was clear the UK was heading for a “hard” Brexit, the gap between the two groups had widened considerably. Now, 65% of Remain supporters were in favour of independence, while only 43% of their Leave counterparts held that view. This rise in support for independence among Remainers was enough to push the overall level of support for Yes close to the 50% mark in the polls.

Meanwhile, the eventual implementation of Brexit has seen the gap between Remain and Leave supporters widen even further. In the latest Scottish Social Attitudes survey conducted towards the end of 2021, just over a quarter (26%) of those who currently support Leave said they would vote Yes to independence. Two-thirds (67%) of Remain supporters expressed that view. In contrast to the position eight years ago, attitudes towards the EU are now an integral part of the constitutional debate in voters’ minds.

None of this, of course, necessarily means that Scotland is set to vote for independence in the event of another referendum. The country remains evenly divided on the subject. But it does help explain why Sturgeon seems keen on the constitutional debate being about Scotland’s relationship with the EU, as well as about its links with the UK.

2022-10-26
Previous Post: The whole world is facing a debt crisis – but richer countries can afford to stop it
Next Post: The World Needs More Gigantic Sci-Fi Sea Dams