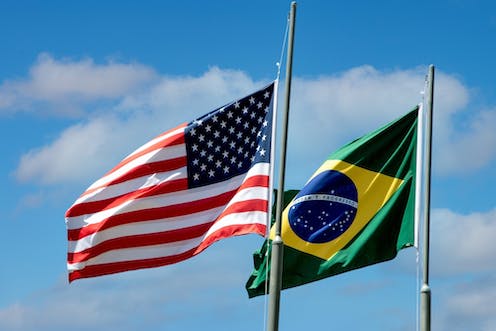 As Russia builds a closer alliance with China, Iran and North Korea, a new alliance in the western hemisphere seems overdue. The US, however, faces a two-pronged challenge: how to balance first Russia in Europe, and second, China in Latin America and the Caribbean.

The US should be looking at alliances with its near neighbours in Latin America, a region with which it has a long and rocky relationship.

Bolstering its relationships with key nations such as Mexico, Brazil and Argentina would also provide some healthy competition for China and additional regional investment, but because of its history the US needs to tread carefully. US president Joe Biden has indicated he wants to pursue a new regional strategy, but so far little action has been taken.

Throughout the 20th century, increasing interactions between the US and Latin America led to a complex interdependence, which exacerbated the power and development gap that divided them. For instance, there were cases of US involvement in regime changes in Latin American such as the 1973 coup against Chilean socialist president Salvador Allende.

There was also economic involvement that culminated with the “Washington consensus” in the late 1980s. This was a series of Washington-prescribed economic reforms such as financial and trade liberalisation, which were adopted by many countries beyond Latin America.

A degree of complacency settled in Washington DC after Latin America’s move towards democratisation in the 1980s and 1990s which led to less focus on the region as a partner. More recently, the US has been preoccupied with Nato’s expansion and the parallel objective of containing Russia.

Observers believe that Latin America, considered a natural ally of the west in general, is at severe risk of democratic decay and that there is a strong probability it could return to dictatorship-dominated regimes, ultimately drifting out of the west’s orbit.

In this context, the US has progressively neglected its own backyard. In fact, some commentators suggest that it has handed Latin America “over to China on a silver platter”.

The results of the US-backed UN general assembly vote on Russia’s suspension from the human rights council earlier this year highlights a waning of its diplomatic weight in its traditional sphere of influence. Out of the 33 Latin American and Caribbean countries present, 13 either abstained or voted against the resolution.

Next, Nicaragua expanded its relationship with Russia by authorising Russian troops, planes and ships to deploy in its territory. The decree allows Russian troops to carry out activities related to law enforcement, humanitarian aid and emergency responses. This is a subtle challenge to the Monroe doctrine which opposed European expansion into Latin America.

Historically, when another power has challenged the US, Latin America has mitigated US dominance by engaging with its challenger. China’s case is no different. It has increased its presence in the region by becoming the main trade partner for much of Latin America.

In 2007, Costa Rica cut ties with Taiwan and in 2017 Panama did likewise. El Salvador followed in 2018, leaving just 17 countries (globally) maintaining diplomatic ties with Taiwan. By 2021, after Nicaragua’s withdrawal, only 14 countries remained.

The IMD World Competitiveness Ranking, which measures how well governments encourage and support the prosperity of their people, shows today’s great divide between the US and Latin America and the Caribbean. In 2022, the US ranked 10th out of 63 countries, while Chile – the closest regional country in the sample – ranks 45th. Brazil (59th) and Argentina (62nd) sit at the bottom of the ranking.

In recent decades, attempts to resolve their endemic socio-economic and political issues have seen Latin American countries turn to right-wing administrations, then to left-wing and back to right-wing. Within this cycle, some countries have turned to political parties upholding what we call “XY populism”: one that oscillates between inclusiveness (government of the people) and exclusion (protects or excludes the interests of particular groups), purporting itself to be anti-establishment.

XY regimes undertake a balancing act to keep the wealthy and, at least rhetorically, the poor happy. They also create perilous conditions for democracy. XY leaders are democratically elected but, once in office, progressively erode the power of democratic institutions. They show proclivity toward authoritarianism with hints of potential dictatorship.

Central to creating the new hemispheric alliance needed is an intensification of those efforts already under way to solve the root cause of those problems in Latin America (and the Caribbean) that significantly concern the US. For instance, poverty causing an estimated 3.5 million children to be affected by migration in 2023.

A new alliance would provide a vital opportunity to strengthen democratic institutions throughout Latin America, to provide economic stimulus for the region, and increase global security while bolstering US and Latin American diplomatic ties.

2022-10-24
Previous Post: PhD Studentship: The epistemic emotion “awe” and its effect on attitudes and motivated information processing
Next Post: Sunak could be declared next PM within hours after Johnson abandons bid