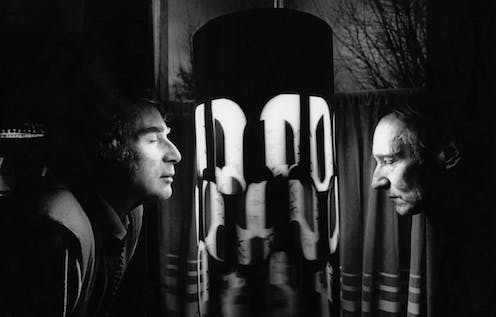 For millennia, people have used mind-altering techniques to achieve different states of consciousness, envision spiritual figures, connect with nature, or simply for the fun of it. Psychedelic substances, in particular, have a long and controversial history. But for just as long, people have been having these experiences without drugs too, using rhythmic techniques such as rocking, chanting or drumming.

Perhaps the most powerful technique of this kind is flickering light, called “ganzflicker”. Ganzflicker effects can be achieved by turning a light on and off, or by alternating colours in a rapid, rhythmic pattern (like a strobe). This can create an instant psychedelic experience.

Ganzflicker elicits striking visual phenomena. People can see geometric shapes and illusory colours but sometimes also complex objects, such as animals and faces – all without any chemical stimulants. Sometimes ganzflicker can even lead to altered states of consciousness (such as losing a sense of time or space) and emotions (ranging from fear to euphoria).

Although its effects are little known today, ganzflicker has influenced and inspired many people through the ages, including the two of us. We are an art historian and brain scientist working together on an interactive showcase of ganzflicker techniques used in science and art. Our collaboration has culminated in the museum exhibition “Ganzflicker: art, science, and psychedelic experience”, which is part of the 2022 Being Human festival.

Ganzflicker’s effects were first documented in 1819 by the physiologist Jan E. Purkinje. Purkinje discovered that illusory patterns could appear if he faced the sun and waved his hand in front of his closed eyelids.

Near the end of the 19th century, an English toymaker and amateur scientist, Charles Benham, produced the first commercially available flicker device: a top with a monochrome pattern that, when spun, produced illusory colours that swirled around the disc.

Fascinated by the mind-altering potential of Walter’s machinery, the artist Brion Gysin, in collaboration with writer William S. Burroughs and mathematician Ian Sommerville, invented the Dreamachine (1962).

The swinging 60s of drug-free psychedelics

A Dreamachine consists of an upright cylinder with patterns cut into it and a lightbulb suspended at its centre. When spun on a turntable at 78rpm, the flickering patterns (viewed through closed eyelids) can cause trance-like hallucinations.

Gysin thought of the Dreamachine as a new kind of artwork – “the first art object to be seen with the eyes closed” – and a form of entertainment, which he believed could replace the television. Others saw the Dreamachine’s potential to be a source of spiritual inspiration.

Burroughs thought it could be used to “storm the citadels of enlightenment”. The poet Alan Ginsberg said: “It sets up optical fields as religious and mandalic as hallucinogenic drugs – it’s like being able to have jewelled biblical designs and landscapes without taking chemicals.”

Flicker experiments in art did not stop with the Dreamachine. Others included Tony Conrad’s groundbreaking structuralist film The Flicker (1966), which was the first artwork to include the warning “may induce epileptic seizures or produce mild symptoms of shock treatment in certain persons”.

The conceptual artist James Turrell’s Bindu Shards (2010) was an enclosed globe that bombards the observer with strobe light. And, more recently, Collective Act created its own Dreamachine (2022) , a public planetarium-style artwork inspired by Gysin’s which toured the UK.

Two hundred years after Jan Purkinje documented the physiological properties of ganzflicker, scientists still do not have a definitive explanation for how it works.

It is also likely that a strong visual flicker influences brain states. Meaningful visions, altered conscious states and heightened emotions may be the result of imaginative suggestion, which is amplified by the trance-inducing properties of rhythmic stimulation.

What is perhaps most powerful about ganzflicker is its universality. Engineers, mathematicians, artists, historians and scientists have all been united by this modest, drug-free means of eliciting dramatic changes in consciousness. The new wave of popularity on this topic will undoubtedly lead to illuminating discoveries in the coming years.

Matthew MacKisack received funding for this exhibition from the Being Human festival, the UK’s national festival of the humanities, taking place 10–19 November 2022. Led by the School of Advanced Study, University of London, in partnership with the Arts and Humanities Research Council and the British Academy. For further information please see beinghumanfestival.org.

Reshanne Reeder received funding for this exhibition from the Being Human festival, the UK’s national festival of the humanities, taking place 10–19 November 2022. Led by the School of Advanced Study, University of London, in partnership with the Arts and Humanities Research Council and the British Academy. For further information please see beinghumanfestival.org.