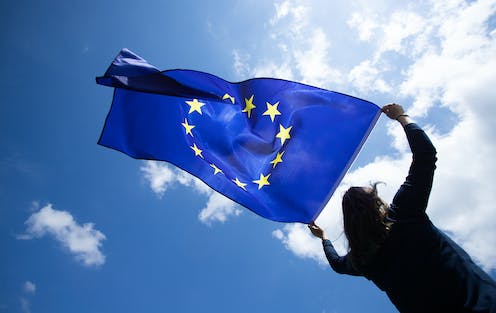 Prior to the 2016 referendum on leaving, polling consistently showed that people in Britain had previously given little thought to the European Union.
But a survey of British people living in Europe and UK-resident EU citizens conducted by our team at the universities of Birmingham and Lancaster suggests Brexit has triggered a profound shift.

These groups report finding themselves reflecting deeply on their identities and their attachments to the European project. They also appear to have been politicised as a result.

As many as three-quarters of the survey’s 2,000 respondents said they were either extremely (36%) or very (39%) attached to the EU. There were only minor variations on this point between the two groups. Sentiments are less intense when it comes to their countries of origin and residence, with most feeling only “moderate” attachment.

Across both populations, two thirds of respondents reported that Brexit had changed their feelings towards the EU. It had given them a shared cause to mobilise around but also had become a focal point for identification.

Mary, a British woman in her 60s living in Ireland, said:

I didn’t really think about it before. It was just there – benign, peaceful and optimistic, holding all the countries of Europe together and providing wonderful opportunities for travel and work. Since Britain left [the EU], I feel bereft and also angry at having my EU citizenship removed.

Mario, an Italian citizen in his 40s who lives in the UK, explained:

I feel more European than Italian. I have always believed in Europe, but after Brexit and all its consequences, my support and sense of belonging has grown a lot more.

It’s notable that Britain’s departure from the EU has triggered a deeper reflection and an apparently stronger desire to belong to a group that was perhaps once taken for granted.

And it’s perhaps ironic that it took Brexit to trigger signs of a kind of bottom-up legitimacy that the EU has long struggled to generate. There are potentially lessons from Brexit for thinking about the future development of European identities and attachments to the EU.

Alongside their attachments to the Europe and the EU, over 50% of those participating in the survey highlighted that Brexit had increased their political participation and engagement, both at the ballot box and beyond.

In the UK, citizens of EU member states, who previously may have identified more strongly with their country of origin, found themselves centring their shared identity as EU citizens within their campaign for citizens’ rights.

Anne, a UK-resident German woman in her 50s, said:

Brexit has completely changed my life. I went from zero political engagement to becoming a political activist and campaigner for citizens’ rights, both as a private individual and volunteer and also professionally by working full time for EU citizens’ rights in the UK.

This identification with being European was matched among British citizens in the EU. Like many other people taking part in this work, Julie, a British woman in her 30s living in France, stressed Brexit had been a political awakening:

I knew nothing about politics before Brexit. I read a lot around the time of the vote and sought to understand all the British and EU legal systems, trade deals etc. I now realise that political ? impacts on our lives in a way I hadn’t realised before … I have been to protests and rallies for the first time in my life.

Active citizenship, a term that describes political engagement beyond formal political participation (such as voting), was a significant feature of the political activities that people reported through the survey.

The survey found that, while no longer EU citizens in name, and without formal political rights in this area, British citizens living in the EU remain invested and active participants in the European project with some participants highlighting that they had joined European social movements and continued supported European political candidates through financial donations and other contributions.

What this survey makes visible is how being European became meaningful through Brexit, but also how it persists as a source of identification for those on both sides of the channel, with and without the formal rights of EU citizens.

2022-10-24
Previous Post: Sunak could be declared next PM within hours after Johnson abandons bid
Next Post: ‘Doctor Who’ Needs to Get Over Itself