House of the Dragon: Everything you need to know before season one’s grand finale 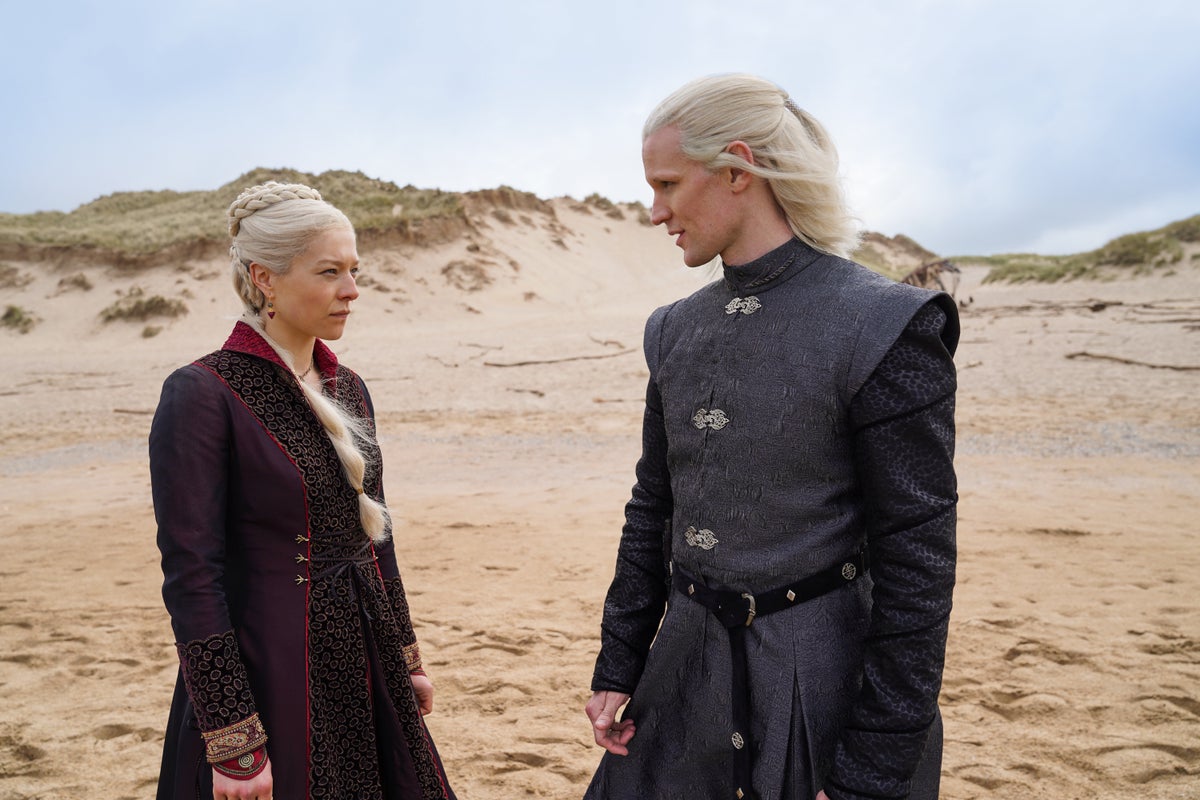 It’s been nine-long weeks of drama and now the grande finale is here. Everything has reached fever-pitch, as the Greens and Blacks are poised to battle it out in the wee hours of Monday morning (or in the second showing, in the evening, if you’re more sensible). Here is everything you need to know before the massive showdown.

The Green vs the Blacks

If you’re reading a lot about the Greens and the Blacks online, but you’re not sure where this has all suddenly come from, it’s just an easy way to differentiate the two teams that have formed over the fight for the Iron Throne.

Blacks are Rhaenyra’s supporters, as black and red are the colours of House Targaryen.

Meanwhile, Alicent’s supporters are called the Greens. If you go back to episode five, you’ll remember that Alicent wore a green dress to her stepdaughter’s wedding, rather than wearing the colours of her new house. The moment symbolised that she was on her own path, that she was backing herself.

What has happened so far?

If you’re just joining the season now, we do recommend going back and catching up. It has been a lot of fun, and it’s worth spending the nine hours watching the Targaryen dynasty get into position for the forthcoming Dance of the Dragons – the civil war that takes place over two years between Aegon II and Rhaenyra.

The last episode was a riot: Viserys finally died and Aegon (Tom Glynn-Carney) became King, though he tried to avoid taking on this massive responsibility by spending most of episode nine running around King’s Landing.

Ser Otto tried to get the new King to call for Rhaenyra’s head; Mysaria (Sonoya Mizuno) turned out to be a Robin Hood figure of sorts; there was a foot-fetish moment between Alicent (Olivia Cooke) and Ser Larys Strong (Matthew Needham); and Princess Rhaenys (Eve Best) got locked up, but escaped and flew off on a dragon, but not before flattening a crowd of civilians and having an ethical predicament about whether to wipe out her foes in a puff of smoke (she didn’t).

What does the trailer tell us?

The trailer, which was released at the beginning of the week, runs at just one minute but is enough to get the heart thumping. It shows us what we expect: the Greens and Blacks preparing for battle.

“The Greens are coming for you Rhaenyra,” says Rhaenys as the trailer opens, over some incredibly dramatic music. “And for your children.” Rhaenyra looks stressed, as well she might.

“You cannot bend your knee to the Hightowers, they stole your birthright,” says Daemon, over a sequence of Rhaenyra in a room full of candles, someone picking up a sword, and King’s Landing seen from the ground at night.

Then, there is the same painted table from which Stannis Baratheon orchestrated his own downfall in Game of Thrones hundreds of years later. Here, it is freshly painted, and the map of Westeros stands out in bright Amber.

The battle, it seems, is about to begin. A hand moves a token on the map onto Winterfell, the ancestral home of House Stark. What does this mean? Will the Starks be involved in the battle? As much as we’d like this, we think it’s unlikely at this late stage in the series, but we can always hope.

“Lay siege to the red keep,” says one of Rhaenyra’s advisors. Her adolescent sons offer their services; someone with dark hair is running towards a dragon in the rain. In another scene, it looks like Daemon is summoning a dragon. We see Aemond remove his eye patch, momentarily revealing the sapphire he uses to plug his eye socket. Then it looks like Otto and Daemon will face off, again, outside Dragonstone. Eek.

It’s hard to say because it all depends on how much episode 10 is going to set matters up for the following season, or whether the drama of the civil war is going to start now. In the books, both Aegon II and Rhaenyra are killed during Dance of the Dragons, so whether that happens now or later (if at all) is yet to be seen.

However, we do know that nearly everyone in the show has an axe to grind. Meaning all-out war.

Most likely to die

Ser Harrold Westerling (Graham McTavish): We’d hate to see it, but in the last episode when the Lord Commander of the Kingsguard defended Rhaenyra and resigned, he basically gave himself a death sentence (also, this season of House of the Dragon is still heavy on the killings, but only of secondary characters. Ser Westerling, this, unfortunately, means you).

Mysaria: Ex-partner of Daemon’s turned charitable figure. It’s way too straightforward for Mysaria to be a good-doer through and through. What are her motives? There is just one episode left for her to show her true colours and they may indeed lead her to a sticky end.

King Aegon: OK, so he’s not a secondary character now that he’s the king, but he’s a despicable human being and has so far shown himself to be an awful ruler – his days are very clearly numbered.

Jacaerys Velaryon (Harry Collett): In the trailer we see Jacaerys offer his services to his mum, and it might well be his figure running towards that dragon. As Rhaenyra’s eldest, he would be set to inherit the throne after her, so his death would really put a spanner in the works, as well as being devastating for his mother.

We know from the books that it’s Rhaenyra’s son Aegon III who becomes King at the conclusion of the civil war, meaning that if the show follows the books, things look pretty grim for her eldest three boys, Joffrey, Lucerys and Jacaerys.

Most likely to win

We’re not being biased here when we say that we think the Blacks have the upper hand. While both sides have dragons and dragonriders, it’s the Blacks who have a stronger team – Rhanerya, Daemon and Rhaenys, vs Alicent, Otto, Aemond and Aegon? We think it’s a bit of a no-brainer.

But, the House of Dragon production team will be aware of this imbalance too, meaning that there’s likely to be an old alliance that will come to the Green’s rescue à la Knights of the Vale in the Battle of the Bastards.

Perhaps it will be Leanor, who will return to take on his ex-wife? When we last saw him he was sailing to the Free Cities with Qarl after she tried to bump him off (for those who aren’t familiar from Game of Thrones, the Free Cities are a group of city-states off the coast of Essos).

Some of the people who live in the Free Cities are incredibly rich and wield a lot of power, and might well enjoy wielding more, so this is a genuine threat to consider and would make for a thrilling twist.

Fans were disappointed by some of writer Sarah Hess’ decisions last episode, particularly the moment when Rhaenys (Eve Best), wielding the might of her roaring dragon, decided to fly off to Rhaneryra rather than wipe out the Targaryen line standing before her, helpless and trembling.

Speaking to The Hollywood Reporter, Hess explained that: “I think she just can’t do it. It’s not her war. The fight is between these two sides and she’s kind of not in it. She doesn’t feel like she’s the one to come in and do that. But you’re right. If she had just incinerated everybody, it’s game over, Rhaenyra wins and we’re done here.

“But the cost is huge. I also feel like that moment, she looks Alicent in the eye and Alicent walks in front of her kid to shield him. It’s one mother to another. Rhaenys is angry, but in her previous scene with Alicent, she respected her, even if she doesn’t agree with her. So she’s not going to kill another woman like that.”

Her comments certainly did not placate fans, but perhaps they do offer a little explanation as the why Rhaenys literally rose above temptations that would have enticed other lesser players.

Oh, we have ideas. If we had our way, Ser Harrold Westerling (Graham McTavish) would kill Ser Cole on the way to returning to Rhaenyra. After Cole killed Lord Lyman Beesbury (Bill Paterson) so flippantly during the last episode, we don’t think he needs a grand death at all, nor does he need to be killed by anyone important.

Then, Lord Larys Strong and Otto can bump each other off too – no one else need sully themselves. Wouldn’t it be marvellous if they both enact secret schemes to get rid of each other, and both are successful?

After that, it would be great if the Blacks and Rhaneryra won. Why, you ask? Well although both sides are truly corrupt, and while Rhaneryra stands for incest and adultery (and yes she did try and kill Laenor), we still think the Greens are the worse of an awful bunch.

Lord Larys murdered his whole family for Alicent, remember, and Otto has been plotting for power since day one. Then, when you look at the kids, Rhaneryra’s sons seem to be more or less alright, whereas Alicent’s children are absolutely horrendous. The King is a cowardly rapist thug – and that’s us just getting started.

So, how about the grand finale is Rhaenys doing what she should have done in episode nine and wiping out all her enemies? Then just before the end, Leanor could show up, accuse Daemon and Rhaneryra of plotting to kill him, and join forces with his mother, ready for a showdown between Rhaneryra and Rhaenys in season two.

The final episode of House of Dragon season 1 will be released on NOW and Sky Atlantic at 2am on October 23, and again at 9pm, October 24

2022-10-22
Previous Post: Liz Truss: what happened in the night of Westminster chaos that triggered the PM’s resignation?
Next Post: Chaos in Westminster: why Liz Truss finally lost control of MPs