When digital nomads come to town: governments want their cash but locals are being left behind – podcast 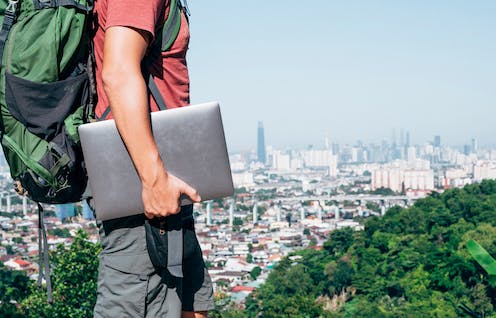 Digital nomads who work as they travel are often attracted by a life of freedom far removed from the daily office grind. Many head to cities that have become known hotspots for remote workers. In this episode of The Conversation Weekly, we find out what impact digital nomads have on these cities and the people who live there, and how governments are responding to the phenomenon.

The La Roma and La Condesa districts of Mexico City have become some of the Mexican capital’s favourite destinations for visitors in recent years. There are long boulevards and the streets are lined with leafy trees and dotted with picturesque parks and fountains. Wander into the right coffee shops and here you’ll find some of the city’s digital nomads, logging on to remote jobs elsewhere.

Speaking to The Conversation Weekly, Erica from Finland tells us she was already working remotely before the pandemic. “Mexico is cheaper, it’s great weather,” she says. “So I figured I might as well move here.”

“The pandemic and the normalisation of remote work has certainly given the digital nomad lifestyle some legitimacy,” says Dave Cook, an anthropologist at University College London in the UK. He’s been chronicling digital nomads and their motivations for the past seven years, interviewing people about their motivations.

The pandemic also made governments take notice of digital nomads as an economic benefit to cash-strapped economies, says Fabiola Mancinelli, an anthropologist at the University of Barcelona in Spain who also studies digital nomads. “That’s why many countries started to create special visa programmes to attract this niche of travellers,” she explains. Countries don’t expect digital nomads to participate in local life, says Mancinelli, but rather to consume locally using the higher purchasing power they get from earning in stronger currencies.

In Mexico City, however, the arrival of digital nomads is angering some local residents who are worried about changes to their neighbourhoods and rising rents. Adrián Hernández Cordero, a sociologist at Metropolitan Autonomous University who studies gentrification, distinguishes between tourists and digital nomads. “They seem to me to be in an intermediate position because they don’t come just for a week – they stay for a few months,” he says.

In Mexico City, Cordero says digital nomads are drawn to areas such as La Roma and La Condesa where it’s easy to get around on foot or by public transport, and where there is a proliferation of restaurants and bars. He says that while these areas were already fairly well-off, the middle classes who live there are witnessing a form of “super-gentrification”.

Listen to the full episode to find out more about the different strategies countries are using to attract digital nomads, and what this means for local residents.

This episode was produced by Mend Mariwany, with sound design by Eloise Stevens. Voiceover by Alberto Rodríguez Alvarado. The executive producer was Gemma Ware. Our theme music is by Neeta Sarl.

You can find us on Twitter @TC_Audio, on Instagram at theconversationdotcom or via email. You can also sign up to The Conversation’s free daily email here. A transcript of this episode will be available soon.

Listen to The Conversation Weekly via any of the apps listed above, download it directly via our RSS feed, or find out how else to listen here.

Adrián Hernández Cordero is part of the National System of Researchers of the National Council for Science and Technology of the Government of Mexico. Dave Cook and Fabiola Mancinelli do not work for, consult, own shares in or receive funding from any company or organisation that would benefit from this article, and have disclosed no relevant affiliations beyond their academic appointment.

2022-10-20
Previous Post: Health secretary Thérèse Coffey gave leftover prescription drugs to a poorly friend – is this advisable or legal?
Next Post: Finally! The Crown season 5 trailer has been released and it’s going to blow your socks off