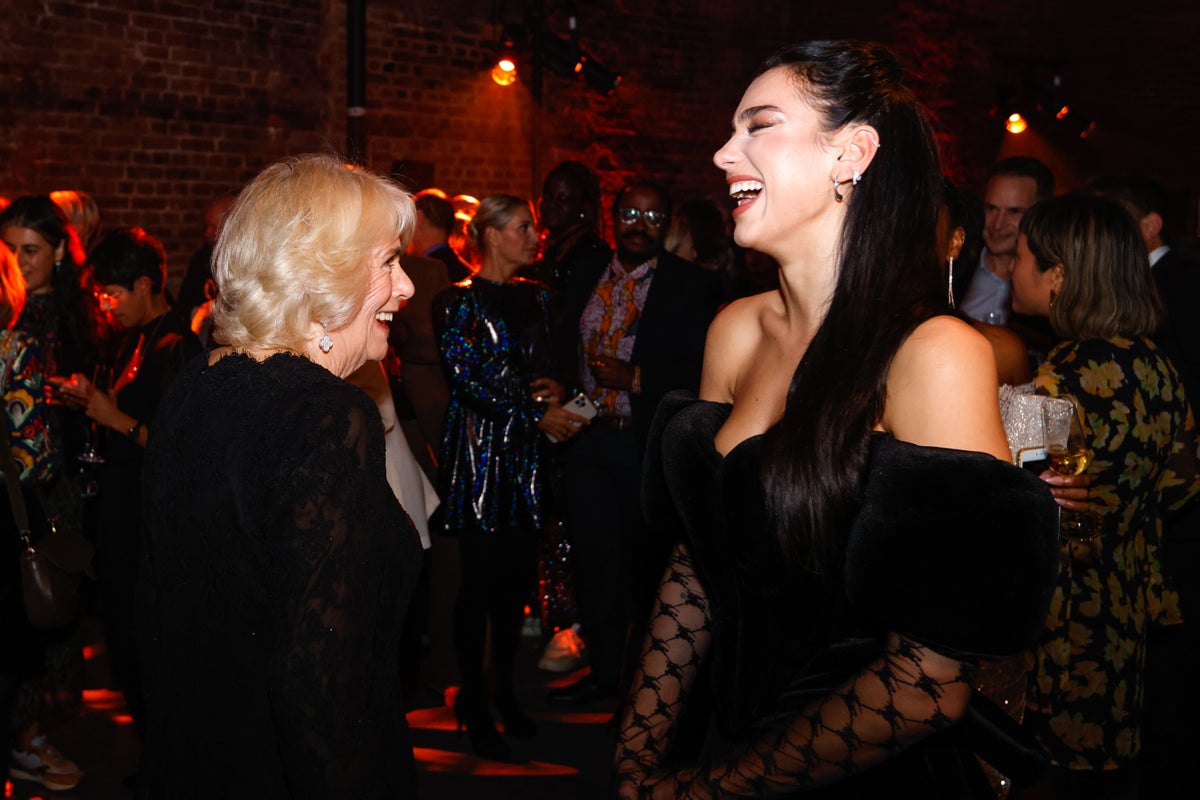 Literature lover Camilla arrived at the Roundhouse in London with Annabel Elliot, and one of the first people she met was Dua Lipa, who will deliver a speech at the event.

During her conversation with Camilla, the New Rules singer appeared to say “no singing tonight”.

Camilla, wearing a black lace cocktail dress by Fiona Clare and diamond earrings by Van Cleef & Arpels, met the shortlisted authors and will present the winner with their prize later in what is the first fully in-person Booker Prize awards ceremony since 2019.

Eve Smith, secretary of the Booker Prize Foundation, said Camilla enjoys the event and takes an interest in the authors.

Speaking in the low-lit drinks reception area, Ms Smith said that as it is the first in-person ceremony since the pandemic, people could expect it to be “reimagined” and “something new”.

She said: “It’s great to have Her Majesty here because she does really take an interest in the authors, and even if she can’t come in previous years she’s always made sure that she sees them, whether it was at St James’s Palace.

“She enjoys being here. I think it’s one of those things where, although there is obviously formality around it, there is also a degree of of informality that she really appreciates.”

One of the shortlisted authors who met the Queen Consort was Sri Lankan Shehan Karunatilaka, whose book is called The Seven Moons Of Maali Almeida.

Karunatilaka said his country has had economic problems and the news that he had been shortlisted “brightened things up”.

He said: “I thought it was a good book. I done my best, but I put it out there and moved on.

“But now it means it’s getting reviewed, it’s getting talked about, it’s selling copies. So yeah, that’s wonderful, but you don’t expect it when you finish it.

“But certainly it’s been a boost, regardless of what happens tonight.”

Karunatilaka said Camilla discussed Sri Lanka with him and he told her where he was when he received the news that he had been shortlisted.

He said his wife was in a four-day petrol queue while he was walking the children to school.

“And yeah, that’s when I got the text,” he said, adding that his wife managed to get a full tank of petrol.

“And that night a friend came over and goes, ‘Wow, congratulations, full tank of petrol. Oh by the way, well done on the Booker’.

“And he was only half joking,” he said.

Percival Everett, shortlisted author of The Trees, said it was “very nice news” to find out he was on the shortlist.

“First of all I thought my publisher was kidding me,” he said.

Everett said he has read the other shortlisted books and described them as “wonderful”, adding that if he was picking the winner he would choose “any of the others”.

The other shortlisted works of fiction this year are Glory by NoViolet Bulawayo, Treacle Walker by Alan Garner, Small Things Like These by Claire Keegan and Oh William! by Elizabeth Strout.

Camilla’s Instagram-based book club The Reading Room has proved popular and she holds more than six patronages related to literature, including the National Literacy Trust.

2022-10-17
Previous Post: Research Associate at University of Bristol
Next Post: Social media: how to protect your mental health