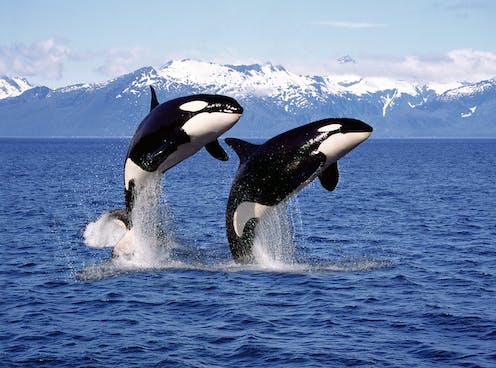 When you think of friendship, what comes to mind? Is it a phone conversation that lasts late into the night? Watching a movie and sharing a pizza? Enjoying some laughs over a beer? Friendship is a central part of the human experience. Our stories, our songs and our conversations are fabrics woven with threads of friendship.

In scientific terms, two people are considered friends if they consistently prefer each other over other individuals. Humans aren’t the only ones who form friendships, though.

It may not shock you that our closest relatives, such as chimpanzees and bonobos, make friends. But species throughout the animal kingdom, from birds and fish to horses and dolphins, have pals too. And you might be surprised to learn just how much they resemble our own human friendships.

Birds of a feather

When you think about your own friends, you might realise that you are alike in one way or another. Maybe you grew up in the same town and went to school together, share hobbies or have similar jobs.

This inclination for similarity, or what scientists call “homophily”, is not exclusive to humans. It is thought this preference for similarity increases the predictability and trust of a friend. Monkeys, zebras, marmots, elephants, and whales all show a preference for interacting with group mates close in age to them.

Chimpanzees and Assamese macaques like to hang out with partners who have a similar personality (yes, animals have personalities too) and dolphins favour other dolphins who find their food in a similar way.

One of the most established homophilic tendencies is an affinity for others who share the same genes: for kin. Across the animal kingdom, species show a predilection for interacting with relatives. So despite those stubborn sibling rivalries, family can be some of the very best friends you have.

When we consider the importance of touch for relationships, we often think about romantic partners. But physical connection can be equally important for any kind of relationship.

Our animal counterparts show us just how important physical touch can be. Some of the behaviours that animals engage in to form and maintain friendships are quite hands-on. Rooks gently preen friends with their beaks, while monkeys groom pals with their hands. These behaviours aren’t so different from how we humans embrace our friends.

In some animals though, friendship rituals can look wild. White-faced capuchins greet their best buds by sticking their fingers in each other’s eye sockets. Male Guinea baboon test their bonds by fondling each other’s genitals.

So, while we don’t recommend poking the eye sockets of your friends, a hug the next time you greet your best friend may not go amiss.

Distance is no barrier

But, of course, not all friendships require people to be near one another.

Animals provide many examples of how friendships can flourish even when pals are apart. Dolphins foster closeness by exchanging calls with other dolphins across long distances. Dolphin whistles can travel up to 740 meters to help preserve long-distance attachments. Many primates, including lemurs, Japanese macaques, bonobos and chimps use vocalisations to sustain social bonds.

Friendships can even form in species that actively avoid one another. North American red squirrels are territorial, meaning they each defend their own homes and rarely come into contact apart from mating.

But scientists have shown squirrels who live next to each other for a long time develop friendships that help them live longer and have more babies. The longer these squirrels live close to the same neighbour, the more they relax and spend less time and energy defending their territory.

While in the past friends were formed with those we spent physical time with, international travel, social media and video calls have changed the way we connect. Although human friendship has begun to look a little different, especially since the COVID pandemic, our animal counterparts suggest that good friendships can be nurtured even at a distance.

Friendship evolved because it helps us, whether we are human or not. Animals (including humans) who have allies live longer and healthier lives by helping their companions deal with challenges. Comrades can offer support in times of conflict and provide protection against threats like predators and food shortage.

This can prevent injuries and death. For example, socially integrated killer whales and wolves are more likely to survive when food is scarce than those on the edges of their groups. This is because their friends share food and social information about where to find it.

We still have much to learn about animal friendship and some scientists are devoted to deepening our understanding of animal social bonds. Modern human life tends to be far removed from risks such as being hunted by bears and wolves, but the bottom line still holds true.

Humans make friends because there are mutual benefits. Those perks might be a shoulder to cry on, a babysitter to watch our kids, or a heads up about job opportunities. As whales, birds and primates prove, friends help us. Without them we are less likely to survive and thrive.

Delphine De Moor has received or currently receives funding from the German Research Foundation and the European Research Council.

2022-10-17
Previous Post: Ukraine war: a desperate Russia defaults to attacking civilians
Next Post: Why food labels showing the exercise needed to burn off calories won’t work for everyone