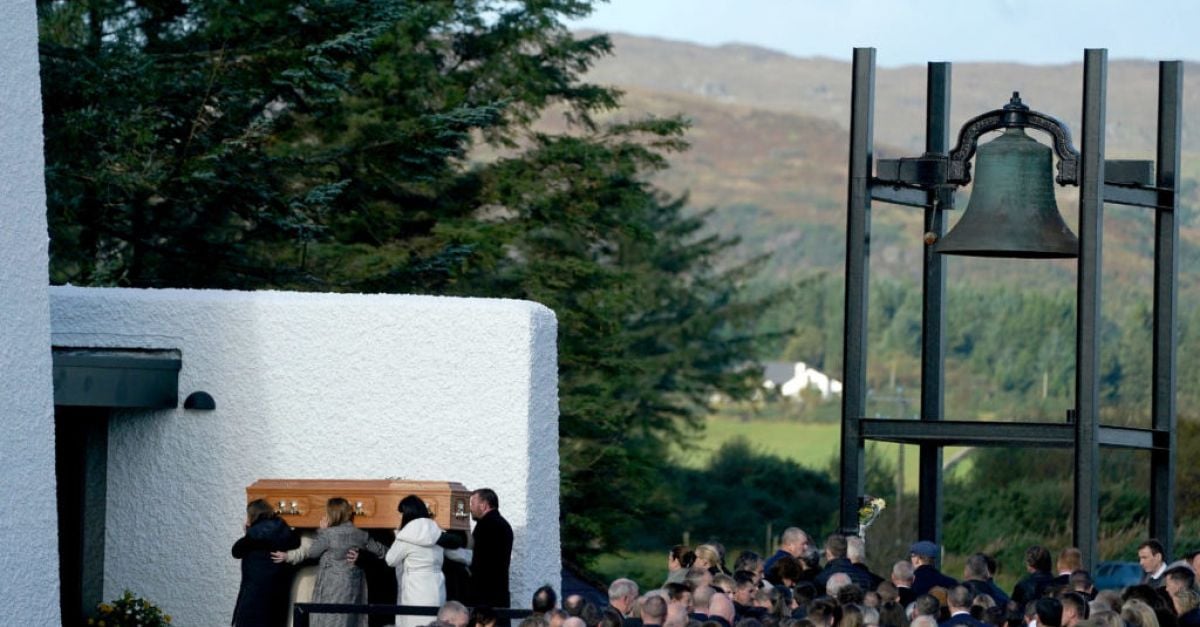 The funeral mass for the oldest victim in the Creeslough explosion has taken place at St Michael’s Church.

People lined up on the Co Donegal village’s main street for the seventh funeral of the 10 people killed in the blast at a service station a week ago.

Hugh Kelly (59) was the oldest of the victims.

He had recently received news that he was in remission after battling cancer, mourners at his funeral were told.

He was described as having grown up in Doe as the youngest of five siblings, and loved to spend time at the castle in the area as a child.

“He built the wall up here behind us in the car park, and someone was telling me he placed his initials in that wall,” Father John Joe Duffy told mourners.

“He spent time in England, and there’s a photograph of him with a colourful exotic bird… something that he posted home one time with a letter.”

The funeral also heard he could turn his hand to any job, from replacing a skirting board to making cradles, dolls and fairy doors for his nieces.

“He was someone who had determination, and he had lots of close scrapes, particularly in recent years with his cancer where he was up and down to Galway for treatment,” Mr Duffy told mourners.

“He was battling that very well and just three weeks ago he was in Galway again for a check-up where he was in remission. That was such happy and good news.”

The funeral was told Mr Kelly had brought fellow explosion victims Robert Garwe and his daughter Shauna Flanagan Garwe to the service station shop on the evening of the blast to buy a birthday cake for her mother.

Mr Kelly was remembered as a “happy man with a cheeky grin”.

Father Duffy told Mr Kelly’s partner Linda she is “very much in their hearts” at this time.

Symbols representing different aspects of Mr Kelly’s life, including a jewellery box that he made “representing his ability to turn his hand to so many things”, a picture of him with his granddaughter to represent his love for his family, a pot of blackberry jam, reminiscent of the hours he spent picking blackberries for jam to share with others, and a recent photograph of him in a corn field, were presented at the service.

Mr Duffy said: “A man who enjoyed a good time, a happy man and a cheeky grin, a man who the family knew and loved so well.”

President of Ireland Michael D Higgins, Minister for Agriculture Charlie McConalogue and Fine Gael TD Joe McHugh were among those attending the service.

Leona Harper’s parents were also among the mourners at the funeral service.

At the funeral for 14-year-old Leona Harper on Thursday, those in attendance heard that the families and communities impacted by the tragedy are “lost in a fog of grief” and painful sadness.

Mourners at her funeral at St Mary’s Church in Ramelton, Co Donegal, heard how her parents, Hugh and Donna, talked of their daughter as a “gem” which shone brightly.

Earlier, mother-of-four Martina Martin was also laid to rest, with Fr John Joe Duffy saying the shop worker had an “abundance of love”.

Mrs Martin (49) was working in the shop when the explosion happened at a service station in the rural village.

The funeral of Leona, who was a talented rugby player and sister to two older brothers, Anthony and Jamie, heard how her sudden death has left all those who knew and loved her “shell-shocked and grief-stricken”.

Fr Duffy told mourners the community of Creeslough was growing in strength each day to get through the hours and days ahead.

“Creeslough is a small village but it is now more than just that. It is now a word for determination, for resolve and for togetherness and how important togetherness is,” he said.

At the end of the service, Fr Duffy urged people affected by the tragedy to contact local counselling services – saying he intends to too.

President Michael D Higgins and the Taoiseach’s aide-de-camp were among those who attended the services for Leona and Mrs Martin.

A service for James O’Flaherty (48) was held in the morning in Derrybeg.

Funeral details for the youngest victim, Shauna Flanagan Garwe (5) and her father, Robert Garwe (50), have yet to be announced.

2022-10-14
Previous Post: U.S. extends Covid public health emergency even though Biden says pandemic is over
Next Post: Brian Eno on Why He Wrote a Climate Album With Deepfake Birdsongs