BBC at 100: the future for global news and challenges facing the World Service 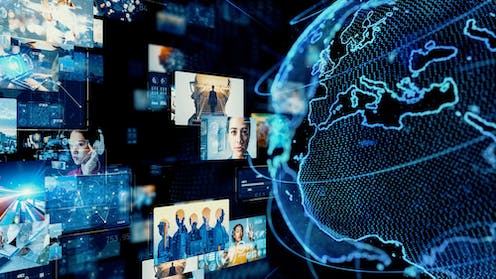 The BBC celebrates its 100th birthday on October 18 2022. It comes as the institution faces increasing competition for audiences from global entertainment providers, anxieties about the sustainability of its funding and a highly competitive global news market.

Its international broadcasting operation, the BBC World Service, is only a little younger, established 90 years ago. Delivering news and programmes in 40 languages across the continents, it faces similar, significant questions about financing, purpose and its ability to deliver in a world of increased social media and online news consumption.

Currently the BBC’s international services are mostly funded by British people who pay a television licence fee, with a third of the total cost covered by the UK government. The BBC claimed that, as of November 2021, the World Service reached a global audience of 364 million people each week.

The role of radio

Radio is still clearly a key means to extend the reach of the World Service and a core part of the BBC’s global news package. It is highly adaptable and reasonably affordable. It also gives people in parts of the world where access to media can be difficult relatively easy access to news. Short-wave radio, the traditional means of broadcasting over very long distances, is also difficult for hostile regimes to block.

Recently, fears that Russia would target Ukraine’s internet infrastructure and erect firewalls to prevent its own citizens’ accessing western media sources, led the BBC to reactivate short-wave radio news services for listeners in both countries. UK government funding of £4.1 million supported this.

Current thinking about the World Service has been shaped by a 2010 decision of UK prime minister David Cameron’s government to withdraw Foreign and Commonwealth Office funding for BBC international operations from 2014. This seemed to end a 60 years-long era when the BBC was the key subcontractor for British global “soft power” (using cultural resources and information to promote British interests overseas).

The plan was that British TV licence-fee payers would fund the World Service, seemingly as an act of international benevolence, free of government ties. However, this seemed unlikely to be sustainable at a time when BBC income was being progressively squeezed.

In 2015, World Service revenues were boosted by a major grant from the UK’s Official Development Assistance fund, covering around a third of the World Service’s running costs. One anonymous BBC insider was quoted by The Guardian saying that this would sustain the corporation’s “strong commitment to uphold global democracy through accurate, impartial and independent news”.

Even before the second world war, the BBC claimed it only broadcast truthful and objective news. Policy makers recognised this as a crucial asset for promoting British interests overseas, and seldom sought to challenge (openly at least) the “editorial independence” of the BBC.

The BBC’s 2016 royal charter further entrenched this thinking, stating that news for overseas audiences should be “firmly based on British values of accuracy, impartiality and fairness”. The idea that a truthful approach to news was a core “British value” that could help promote democracy around the world became part of the BBC’s basic mission statement.

Read more:
US and Russia engage in a digital battle for hearts and minds


In 2017 the BBC established 17 new foreign-language radio and online services. To maximise possibilities for listening it purchased FM transmitter time in major cities around the world, and deployed internet radio, increasingly accessible to many users via mobile devices. The focus was on Africa and Asia. However, the World Service also strengthened its Arabic and Russian provision to serve those who “sorely need reliable information”.

The World Service’s rationale has been strengthened by growing concerns about “fake news”: distorted and untrue reports designed to serve the commercial or geopolitical interests of those who manufacture it. The BBC has, in response, further emphasised its historic role as a truthful broadcaster. In its trusted news initiative it has worked with other global media outlets to tackle disinformation, hosting debate and discussion, and sharing intelligence about the most misleading campaigns.

Claims for continued relevance also rest on a drive to bring news to an ever larger audience. The BBC’s stated aim is to reach 500 million people this year, and a billion within another decade. In 2021 the BBC claimed to be on course to realise this goal, reaching a global audience of 489 million. The audience for the World Service accounted for the single largest component of this global figure.

What then should we make of the BBC’s announcement in September 2022 that 400 jobs would have to go at the World Service due to the freezing of the licence fee and rapidly rising costs? Radio services in languages including Arabic, Persian, Hindi and Chinese will disappear, and programme production for the English-language radio service will be pared down. Certainly, these cuts will reduce the BBC’s impact overseas. But they should also be understood as part of a longstanding and ongoing transition from shortwave radio to web radio.

Similarly, cutting back on World Service non-news programming might not be a major cause for concern. In an age of global streaming services and social media, audiences can receive programmes from providers from across the globe. The World Service would find it hard to compete with many of these services. However, the BBC remains in a pre-eminent position to offer trusted news.

By focusing on providing news online, the World Service is putting its resources where it can best promote British soft power and international influence, thereby improving prospects for its own continued existence. However, abandoning radio entirely would be a mistake. As the Russian invasion of Ukraine has demonstrated, radio remains a crucial way to reach audiences who might find their access to trusted news via the internet suddenly cut off.

Simon Potter does not work for, consult, own shares in or receive funding from any company or organisation that would benefit from this article, and has disclosed no relevant affiliations beyond their academic appointment.

2022-10-14
Previous Post: Placements Coordinator
Next Post: Get Baaeed at 30/1 to win Champion Stakes at Ascot with BetVictor