Doric: the Scots dialect spoken by the Queen – what it sounds like and where it comes from 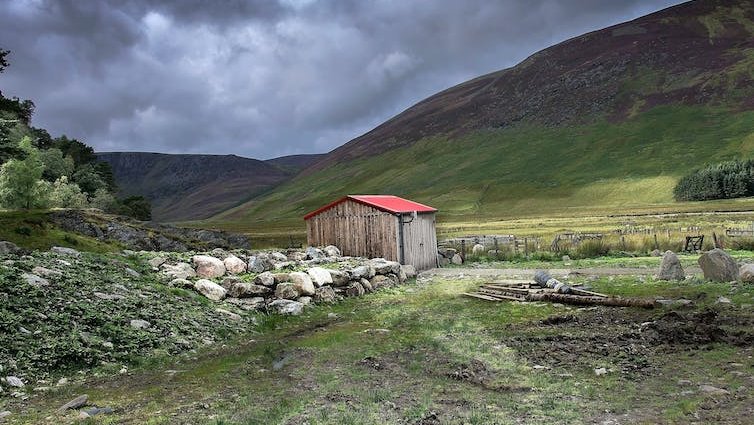 In the aftermath of her passing, it was reported that Queen Elizabeth could speak the local dialect of Balmoral and the region around it. This dialect of the north-east of Scotland – called the Doric by local people –- is a distinctive, well-preserved form of the Scots language.

“Doric” is a term used across Europe during the Renaissance to refer to rougher, but more genuine forms of language, in comparison to the “Attic” of the cities, smart but corrupt. Today, the Doric is spoken across non-Gaelic Scotland and in pockets in the northernmost counties of Ireland.

Though a close relative of standard English, Scots has a different history, as I have shown in my book, A Sociolinguistic History of Scotland. It was the official language of the Scottish state in the 15th and 16th centuries, before being dialectalised under English, much like Occitan was under French, from the 17th century. This is the process by which a state language loses its social functions.

Socially, North-East Scots is of the soil. Its distinctiveness derives from the traditional work and lives of its inhabitants, in particular, farming and fishing. This means that much which made it so distinctive has faded as the world has changed. Many speakers of dense dialect remain, however, and are often celebrated in their communities.

The best way to demonstrate what the Doric sounds like is to give an example.

A bus filled with old farmers from the north-east has stopped outside a friterie in Belgium. One of the farmers comes out of the chip shop looking disconsolate.

“Ah gings in an says til e quinie ‘A pyokie o chups, quine’. She leukit at me like Ah’d gaen gyte,” says the old farmer.

The bus driver goes into the chip shop and says, “One pommes frites, please.” The young woman smiles and gives him a bag of chips.

As this example shows, North-East Scots is very distinctive in terms of pronunciation, including in relation to other dialects of Scots. In Scotland, as is also true in most of Ireland, “wh” words are pronounced differently from “w”, almost as if the “h” preceded the “w”. One shibboleth, or highly marked feature, of North-East Scots is that “wh” is in fact pronounced “f”.

The Doric can be very conservative. Many of its features are long since extinct in other varieties of Scots and English. This can be seen in “vrang” for “wrong”, which still uses a consonant before the “r”, as opposed to contemporary English, in which the “w” has been obsolete since the 17th century. Similarly, local people call a carpenter a “vricht” (which is akin to the archaic English “wright”) and a naughty child, a “vratch” (like the English “wretch”).

The vocabulary used is also strikingly different from English. In the above passage we have “gyte” meaning “mad”. This is common to many dialects of Scots.

“Quinie”, meanwhile, is a highly local word, meaning “girl” or “young woman”. This is related either to the archaic English “quean” meaning “woman (of ill repute)” or “queen”. Interestingly, in Norwegian, the word for “woman” is “kvinne”. Aberdeen, it should be noted, is considerably closer to Bergen than to London.

Then there is the use of the diminutive “-ie”, which is particularly prevalent in the north-east. See “pyokie” for “bag”. An older man is a “mannie”, who lives in a “hoosie” (a house) with his “wifie” (wife), and so on.

Many of the distinctive local words are of Gaelic origin. “Clyack”, meaning “harvest festival”, derives from a Gaelic word for a young woman. This refers to the corn dolly used in the festivities.

Another word which surprised me when I moved to Aberdeen is “stew” for “dust”. It was probably borrowed from a Scandinavian language in the Middle Ages. In other dialects the primary word for dust is “stoor”, which is of French origin.

Scots has been and is a language of high literature. The north-east takes a strong place in this literature, in the figures of, for example, the poets and Aberdeenshire natives Charles Murray (1884-1941), and Sheena Blackhall (1947-).

In 2001, Scots was recognised as a language worthy of protection by the UK government. More recently, the Scottish government announced a consultation on a Scottish Languages Bill, which would give Scots further protection alongside Gaelic.

It is entirely fitting that Queen Elizabeth spoke the Doric. Many of her ancestors wrote in Scots. James I and James V of Scotland were accomplished poets. James VI (and I of England) wrote prose in the language and indeed continued to speak the language when he ascended to the thrones of Ireland and England.

As well as her many happy memories of Balmoral, the Queen might also have been drawn to the language because of her childhood visits to her mother’s family home in Angus. There they speak a dialect not terribly different from those spoken on the other side of the mountains. Much has been made, in Aberdeenshire, of the Queen being a local. In many ways, she was.

Robert McColl Millar does not work for, consult, own shares in or receive funding from any company or organization that would benefit from this article, and has disclosed no relevant affiliations beyond their academic appointment.

2022-09-12
Previous Post: Energy crisis: the UK is still heading for widespread fuel poverty – despite the government’s price cap
Next Post: King Charles inherits crown with support for monarchy at record low – but future not set in stone