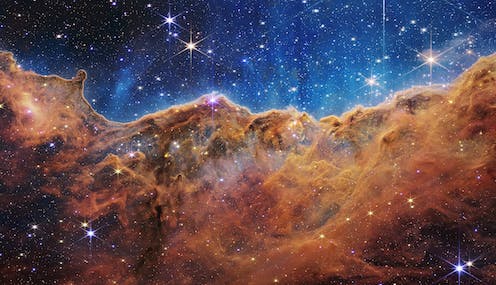 Our Sun has a rather lonely existence in the Milky Way galaxy. It sits on its own, four light years away from the nearest star, with only its planetary system for company. But it wasn’t always like this. We almost exclusively observe young stars in groups, so-called stellar nurseries, where they brush shoulders with stellar siblings.

These stellar nurseries are densely populated places, where hundreds of thousands of stars often reside in the same volume of space that the Sun inhabits on its own. Violent interactions, in which stars exchange energy, occur frequently, but not for long. After a few million years, the groups of stars dissipate, populating the Milky Way with more stars.

Our new paper, published in the Monthly Notices of the Royal Astronomical Society, shows how massive stars in such stellar nurseries can steal planets away from each other – and what the signs of such theft are.

Almost immediately after young stars are born, planetary systems begin to form around them. We have had indirect evidence of this for more than 30 years. Observations of the light from young stars display an unexpected excess of infrared radiation. This was (and still is) explained as originating from small dust particles (100th of a centimetre) orbiting the star in a disc of material. It is from these dust particles that planets are (eventually) formed.

The field of star and planet formation underwent a revolution in late 2014 when the first images of planet-forming discs around stars were seen with the Atacama Large Millimetre Array (Alma) telescope in the Chilean desert. The first, and subsequent, images from Alma were nothing short of spectacular. Many of the discs had features and structures that can be attributed to the presence of fully formed, Jupiter-like planets.

Planet formation happens rapidly after the onset of star formation, and certainly while the star is still interacting with its siblings in the stellar nursery. Because planets form so quickly, they will be affected by the densely populated star-forming environment. Planets can have their orbits altered, which can manifest in several ways.

Sometimes, the distance of the planet from the host star becomes either smaller or larger, but more often there is a change to the shape of the orbit – usually becoming less circular (more “eccentric”). Occasionally, a planet is liberated from its orbit around its host star and becomes “free-floating” in the star-forming region, meaning it is not bound to any star by gravity.

A significant fraction of free-forming planets are captured, becoming gravitationally bound to a different star than the one around which they formed. A similar number of planets are even stolen from their orbit – directly exchanged between stars without first being free-floating.

In studying this great planetary heist, we have learned that planets that formed in the most populous star-forming regions may be easily captured or stolen by stars that are very much heavier than our own Sun. Stars form with a wide range of masses. Our Sun is slightly unusual in that it is around twice as heavy as the average mass star in the universe. However, a relatively small number of stars are heavier still, and these “OB-type” stars dominate the light we see in the Milky Way (and other galaxies).

These massive stars are very bright but have much shorter lives than the Sun, and in some instances, they live for only several million years (rather than billions). We might, therefore, not expect to find planets around them.

The Beast collaboration found these planets (“Beasties”) orbiting stars in the Sco
Cen star-forming region, which is currently gradually dissolving into the Milky Way. The original explanation put forward for these Beasties is that they formed just like the gas giant planets in our Solar System, but they are more massive and further out because they are a scaled-up version of our own planetary system.

Massive stars, however, emit copious quantities of ultraviolet radiation, which can evaporate away the gas from which giant planets such as Jupiter and Saturn require to form. So how do Beasties end up around them?

We know from our previous work that planet theft and capture can happen in populous star-forming regions, and so we looked in our simulations for planets that were captured or stolen by massive stars.

Our new explanation for the Beasties is that they ended up in their orbits due to a planetary heist – they were born around other stars and were subsequently captured or stolen by the massive stars. These planetary systems are usually on wide (at least 100 Earth-Sun) orbits, and are highly eccentric – very different to the circular, close-in planets in our Solar System, which we think formed there.

Perhaps there is a captured planet in our Solar System – the elusive and hypothetical Planet 9 – but Jupiter and the other giant planets formed around our Sun.

Our computer simulations also appear to predict the frequency of these systems (one or two per star-forming region), and the orbital characteristics of the Beasties.
Future observations will shed more light on the origin of these planets, but for now they represent yet another exciting discovery in the field of exoplanet science.

2022-09-09
Previous Post: Marketing Officer at University of Bristol
Next Post: COVID vaccine: children aged 5-11 in England will no longer be offered a jab – here’s why that’s bad news