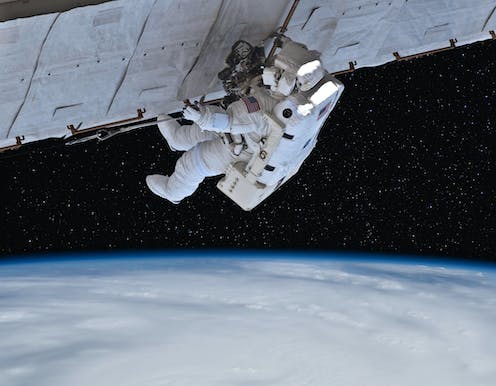 Space is a hostile, extreme environment. It’s only a matter of time before ordinary people are exposed to this environment, either by engaging in space tourism or by joining self-sustaining colonies far away from Earth.

To this end, there needs to be a much better understanding of how the environmental dangers of space will affect the biology of our cells, tissues, organs, and cognition. Crucially for future space colonies, we need to know whether we can easily reproduce in environments other than those found on Earth.

The effects of radiation on our cells, producing DNA damage, are well documented. What’s less clear is how lower levels of gravity, what scientists call microgravity, will affect the mechanisms and rhythms taking place within our cells.

Scientists are only just beginning to investigate how activity in our cells might be affected by exposure to microgravity. Crucially, experiments on embryonic stem cells, and models of how embryos develop in their first few weeks in space, will help us determine whether it’s possible for humans to produce offspring in the extraplanetary colonies of the future.

The ability to reproduce in space has been assessed in a few animals, including insects, amphibians, fish, reptiles, birds, and rodents. They have found that it’s certainly possible for organisms such as fish, frogs and geckos to produce fertilised eggs during spaceflight that can live and reproduce on Earth.

But the picture is more complicated in mammals. A study of mice, for instance, found that their oestrous cycle, part of the reproductive cycle, was disrupted by exposure to microgravity. Another study found that exposure to microgravity caused negative neurological alterations in rats. Hypothetically, these effects could also be transmitted to subsequent generations.

This likely happens because our cells did not evolve to work in microgravity. They evolved over millions of years on Earth, in it’s unique gravitational field. Earth’s gravity is part of what anchors and exerts physical force on our tissues, our cells, and our intracellular contents, helping to control specific movements within cells. The study of this is called mechanobiology.

The division of cells and the movement of genes and chromosomes within them, which is crucial to the development of a foetus, also works with and against the force of gravity as we know it on Earth. It follows that systems evolved to work perfectly in Earth’s gravity may be affected when the force of gravity changes.

When an embryo first starts to divide, in a process called cleavage, the rate of division can be faster at one end of the embryo than the other. Gravity plays a role here, determining the position of the very first building blocks in a human life.

It is also possible to produce pluripotent human stem cells from normal mature cells of our bodies, which are called induced pluripotent stem cells. These have also been studied under microgravity, with experiments on Earth finding that induced stem cells proliferate faster in simulated microgravity. Two batches of these stem cells are currently on the International Space Station to see whether these results can be replicated in space.

If adult stem cells do proliferate faster in space, it could open the door for commercial stem cell manufacturers to produce these cells in orbit, seeing as it’s difficult to culture enough stem cells on Earth to treat degenerative diseases with stem cell therapies.

Besides normal cellular processes, it’s also unclear how fertilisation, hormone production, lactation, and even birth itself will be affected by exposure to microgravity.

It seems that short-term exposure to microgravity, of perhaps half an hour, will probably not have too much of an effect on our cells. But longer exposures of days or weeks are likely to have an effect. This is not taking into account the effect of radiation on our cells and DNA, but we already know how to protect against radiation.

Scientists are looking at two ways to protect against the adverse effects of microgravity on our biology: intervention at the cellular level, using drugs or nanotechnology, and intervention on the environmental level, by simulating Earth’s gravity in spacecraft or off-world colonies. Both fields of study are in their early stages.

Still, studying stem cells in space provides a valuable window into how pregnancy could work, or not work, when we’re outside Earth’s gravitational field. For now, those fortunate enough to go to space might do well to avoid attempting to conceive before, during or directly after a space flight.

2022-09-07
Previous Post: Where is Joe Biden today?
Next Post: Jockeys and trainers among hundreds at funeral of ‘charismatic’ Jack de Bromhead