Drug use among young people in England is down 24% 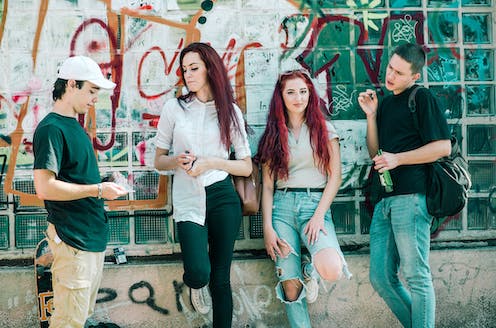 Adolescence is the time of life when young people – but especially boys – are more prone to experiment and take risks. This can include trying alcohol and other drugs for the first time. A new report from NHS Digital reveals how many young people aged 11 to 15 used drugs in 2021, and which ones are popular.

This is the best survey available on drug use in English school pupils. The headline finding is that, after several years of increases, drug use has fallen by 12% in 2021. Overall, there has been a reduction of 24% in young people reporting using drugs from 2018 to 2021.

Almost half (49%) of children who took drugs reported getting them from a friend, with only 16% getting their drugs from what they deem to be a “dealer”.

It is encouraging to see the continuing fall in rates of cigarette smoking down by 5% from the last survey in 2018. However, this same period saw a 6% increase in the use of e-cigarettes, with almost one in ten young people reporting using these products.

Although safer than traditional smoking, vaping is not risk-free. Many vaping products contain nicotine that can quickly create a physical and psychological dependency. We also don’t know what the long-term effects of vaping on young people are as they develop into adults. There is also the issue of how young people can access these products, as the law says e-cigarettes should not be sold to those under 18 in the UK.

Levels of alcohol use have remained relatively stable with 6% of pupils surveyed saying they drank at least once a week, a figure unchanged from 2018. However, there has been an increase (of 3%) among this group of those saying they drink alone. Drinking or using other drugs alone increases the risk of harm as there is no one around to help if things go wrong such as overdosing or having an accident.

Nitrous oxide, also known as laughing gas, has featured in several news reports recently with concerns about young people in particular. The NHS Digital report shows there has actually been a decrease in the popularity of this drug. Whereas 4.1% of children reported using it in 2018, this had fallen to 1.8% in 2021 – a 56% decrease.

Overall it is encouraging to see this significant fall in young people’s use of drugs. Although we can’t be sure why this is happening there could be several factors at play.

The pressure to achieve in education may mean pupils are less likely to use substances that could hamper studies. The disruptive effect of COVID may also have reduced opportunities to use drugs.

Equally, this is a generation that is conscious of how they are perceived on social media, any images or inference of drug intoxication, including alcohol, could be acting as a deterrent to use. Also, this cohort is more aware of their psychological needs so when their mental health deteriorates they will seek appropriate help rather than self-medicate with drugs.

However, it’s worth noting the continued popularity of nitrous, and the potential growing danger. It is still the third most frequently used drug in this age group after cannabis and volatile substances such as inhaling solvents like glue.

Given the current squeeze on incomes, which affects children as well as adults, larger canisters of nitrous oxide are better value for money. Typically, nitrous oxide dispensed and sold in a balloon would sell for between £3 to £5, and a box of whippets, small shiny canisters which are often seen littering city streets, for around £20.

Larger canisters that contain many times more gas but at only a slightly higher price hold obvious economic attraction. So while the number of users might be decreasing, and most of these will only use it infrequently, existing heavier users who might have been using hundreds of canisters a week could now be exposed to the same volume of gas through a smaller number of purchases. Similarly, even infrequent users could be exposed to very harmful levels of nitrous through these types of canisters.

Excessive use of nitrous oxide can lead to paralysis, which can last for months or can even be permanent.

Will the Conservatives’ hard line on drugs continue?

Priti Patel, the former UK home secretary, promised to “get tough” on those using drugs generally, and most recently on those using nitrous oxide. She asked her scientific advisers to carry out an assessment of its potential harms. This could prompt a change in the law and introduce criminal penalties for possession of the drug as with other legally controlled substances, such as cannabis.

Although it’s not clear how her replacement will approach drug policy, the Conservatives have taken a hard line on drug use, increasing the penalties for supply and use, a phenomenon known as the drug policy ratchet.

While scientific evidence contributes to the development of drug policy and laws, other factors, including public opinion and wider political agendas are also important. So powerfully emotive TV images of young people experiencing serious harmful effects of use, or calls from respected doctors to address a perceived “crisis”, may trump purely scientific perspectives.

We need a new approach

What often accompanies news stories about drugs is a call for more education, particularly when young people are involved. It is important to be very clear about what kind of education is provided. Trying to scare young people about drugs by focusing on deaths or extreme health harms is not an effective technique and could even be counterproductive.

Similarly, the evidence on the benefits of “just providing the facts” is also sparse. More generally, effective drug education focuses on areas such as developing health and decision-making skills in young people, and how to deal with social situations in which drugs are being offered or used. Educators can then build on this with specific drug information.

Collecting data on young people’s use of drugs is important as what we do know is that those starting drug use early in life increase the risk of going on to have problems with drugs as adults. Understanding the scale of drug use and the type of drugs that are popular among young people should help inform a policy response. But any policy on drugs should look to minimise harm rather than simply ratchet up punishment, an approach that has failed for decades.

Harry Sumnall receives and has received funding from grant awarding bodies for drug and alcohol research. He is an unpaid scientific adviser to the MIND Foundation.

2022-09-07
Previous Post: Jockeys and trainers among hundreds at funeral of ‘charismatic’ Jack de Bromhead
Next Post: 3 takeaways from the Investing Club’s ‘Morning Meeting’ on Wednesday