FOOTBALL fans have mocked Tottenham after they appeared to troll themselves with a now-deleted social media post.

Antonio Conte’s men kick off their Champions League campaign at home to Marseille on Wednesday after two years away from Europe’s premier tournament.

But as they prepare to begin life back in the competition, Spurs shared an unfortunate picture online.

The official Tottenham Twitter account posted an image of a club water bottle with the words “Champions League” on it.

In the text of the tweet, they added a pin and the caption: “Hotspur Way.”

It was deleted shortly after, but not before many had already seen it. 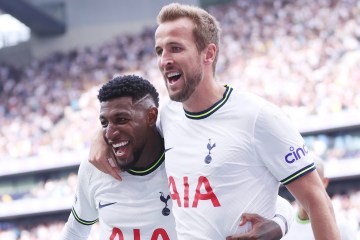 And football supporters ridiculed it online, with many jokingly suggesting they were labelling themselves as a side that tend to “bottle” it on the big stage.

One said: “If Tottenham somehow lose to Marseille tomorrow then you know what’s coming lol.”

Another fan loving the irony of the tweet added: “Come on, this is unfairly funny.”

CHAMPIONS LEAGUE BETTING OFFER – GET £50 BACK AS CASH

A couple of Spurs fans also saw the funny side as they took the mick out of their own side – who are one of England’s traditional “big six” despite having not won a trophy for 14 years.

One said: “As someone who has been following Spurs for 30 years you’d better learn to find some humour at the situations we find ourselves in or you’ll just be miserable all the time.”

And another agreed, adding: “Why would our Twitter admin do this 😭. It’s pretty funny, but come on, you really just opened the door there.”

Tottenham have made a strong start to their Premier League campaign, winning four and drawing two of their opening six matches.

They sit third in the table, one point below leaders Arsenal.

Along with Marseille, Conte’s men have been drawn in their Champions League group alongside Eintracht Frankfurt and Sporting Lisbon.