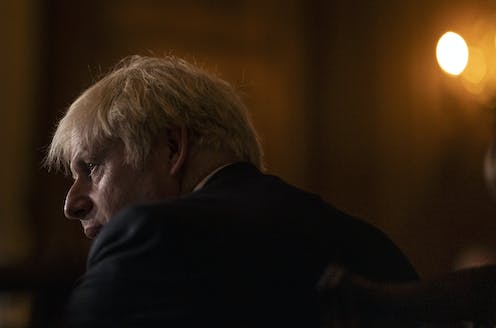 Boris Johnson’s tenure as British prime minister is nearly over, ending a fractious period for parliament and the wider political system.

His two and a half years in Downing Street have exposed some of the vulnerabilities of British constitutional norms, demonstrating how the combination of a strong parliamentary majority, ambiguous ministerial and parliamentary rules and a national crisis can give prime ministers a seemingly free hand to dominate political life and avoid scrutiny.

As he prepares to stand down from office and we look to the future of a new government, four key elements of his premiership are worth scrutinising.

1. Possibly misleading – or even lying to – MPs

Probably the darkest period in Johnson’s time as prime minister came during the early months of 2022 when he stood accused of lying to parliament. He repeatedly denied that he had misled MPs over what he did and didn’t know about parties in Downing Street during COVID lockdowns before photos emerged of him attending events.

The ministerial code – a document which sets out the standards that all government ministers should follow – states that truthfulness and accuracy are “of paramount importance”. If a minister – including the prime minister – inadvertently states a falsehood in the House of Commons chamber, they must correct the error “at the earliest opportunity”.

A recent investigation by the Independent and the fact-checking organisation Full Fact found that Johnson’s government has made at least 27 false statements to parliament since 2019 that are yet to be corrected – 17 of which came straight from the prime minister.

When Johnson was fined by the police for attending parties he’d previously denied knowledge of, opposition leader Keir Starmer tabled a motion in the House of Commons referring the prime minister to the Standards and Privileges Committee for lying to parliament. He said he was doing so “to defend the simple principle that honesty, integrity and telling the truth matter in our politics”.

The committee is still conducting its inquiry into Johnson’s actions. However, the leadership campaign brought fresh concern that no repercussions would ever follow this scandal given that Liz Truss said she would shut down the investigation into Johnson and appoint no ethics adviser at all.

2. Being unnecessarily rude in the House of Commons

Johnson also showed himself to be adept at circumnavigating rules on how MPs can address one another in the House of Commons chamber, often by deploying flamboyant language to mask insults.

During Johnson’s tenure, multiple MPs have highlighted the irony in how easy it is to be punished for calling someone a liar in the House of Commons and how hard it is to actually pin someone down for lying because of the rules of parliamentary debate.

Discourteous behaviour in the Commons is not new. Other prime ministers have also been told off by the Speaker for throwing insults at MPs. But it has been a much more noticeable feature of Johnson’s parliamentary discourse. He even referred to Keir Starmer as a “pointless human bollard” in his final Prime Minister’s Questions.

From swearing during his first ever outing at the despatch box as prime minister, to being accused of using inflammatory language, Johnson has at times cast doubt on the Commons as a place of serious and sensible debate.

The balance between government and parliament is often a tense one, and rightly so. The government wants to get its business through, but at the same time, it must accept that parliament has a right to scrutinise and debate it. At times, the balance swings too much in the government’s favour. The Johnson government, though, went much further than other administrations in exploiting this power.

In August 2019, Johnson prorogued parliament – ending the term unexpectedly early and preventing MPs from scrutinising the government as he tried to get his Brexit deal passed. Eventually, the Supreme Court had to step in to declare the move unlawful in what one MP described as “the most damning judicial indictment of a Government in modern times”.

It was an early statement from Johnson about his apparent disregard for parliamentary scrutiny and unfortunately, it would set the tone for the relationship between the prime minister and parliament that would follow. Johnson’s tenure has been littered with examples of scrutiny dodging. He cancelled so many appearances before the Liaison Committee, composed of some of the most powerful backbench MPs, that the then chair Sarah Wollaston wrote to tell him that she was “astonished” at his refusal to take part in detailed scrutiny.

Johnson has also been told off by the speaker on several occasions for trying to ask questions rather than answer them at Prime Minister’s Questions.

4. Making announcements to the press before parliament got a look in

During the height of the pandemic, the British public became accustomed to watching a live press conference with Johnson or other senior government figures every day.

But the prime minister, along with all other government ministers, is supposed to make any major policy announcements to parliament before talking to the press. This is written clearly in the Ministerial Code.

The tension was not helped when it emerged that Johnson was building a new £2.6 million press briefing room, giving a permanent spot in Downing Street for prime ministerial broadcasts.

The chaos and uncertainty that marked the early days of the pandemic are now well behind us, but a questionable precedent has been set by Johnson. MPs will be hoping for a return to normal procedure but will the temptation to continue sidestepping parliament prove too much for his successor?

Louise Thompson does not work for, consult, own shares in or receive funding from any company or organisation that would benefit from this article, and has disclosed no relevant affiliations beyond their academic appointment.