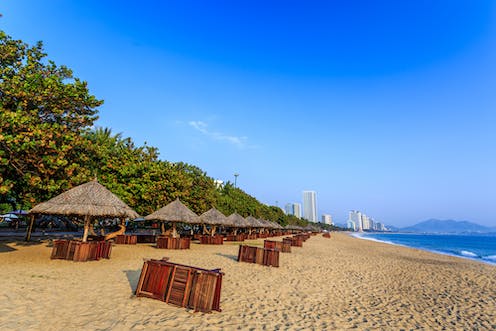 Tourism destinations globally are seeing a significant hit to their economies as Russians stay at home due to war-related sanctions, with possible long-term effects on international tourism.

This comes as European countries with Russian borders say they may ban all Russian tourists.

Russians were the world’s seventh biggest tourist spenders before the pandemic, splashing out US$36 billion (£31 billion) annually.

Upmarket Vietnamese hotels, previously popular with Russian tourists, are almost empty or have been sold. The tour guide business has also been affected.

Nha Trang isn’t alone. In Thailand’s resort Phuket, shops and bazaars would normally be bustling with Russian tourists. Hotel companies remain uncertain about their future after many Russians cancelled their holidays when Russian airlines suspended flights to Phuket in March 2022. While foreign arrivals represented 59% of arrivals in Phuket airport before the pandemic, this figure was 35% in the first half of 2022.


Now resorts dotted around the globe, from Sharm el-Sheikh in Egypt to Varadero in Cuba, are all suffering economic hits with low hotel occupancy levels, resulting in lost jobs, bankruptcies and falls in income.

With forecasts of fewer than 2 million Russian tourists in 2022 and a US$3 billion to US$4 billion drop in tourism revenues, the change has led to job losses, just as fuel and other prices increase.

It’s an economic blow, as each tourist in Turkey generates roughly three temporary jobs and each tourism dollar generates up to US$2.50 worth of revenue for industries supplying tourist resorts, according to Al Jazeera.

The fall in tourist receipts and hard currency is putting pressure on the Turkish economy and its currency, as tourism accounted for 13% of GDP before the war and the pandemic.

The EU has already suspended the European Union-Russia visa facilitation agreement, which made it relatively easy for Russians to obtain travel documents. Earlier sanctions had included bans on EU and Russian airlines flying to and from Russia. They also limited Russian tourists access to international credit overseas.

Many wealthy Russian tourists have switched to trips to Dubai. However, high-end shops in New York, London and Milan, and in glitzy destinations like St. Moritz and Sölden and popular spa towns such as Karlovy Vary in the Czech Republic, are missing the business of the wealthiest Russian visitors.

On the French Côte d’Azur, luxury boutique hotels and expensive seafood restaurants have experienced a drop in business. They have not been able to replace wealthy Russian tourists with enough travellers from counties such as Bahrain.

Smaller countries, which hosted large numbers of Russian tourists as lockdowns eased, including Cyprus, the Maldives, Seychelles and the Dominican Republic found their post-pandemic tourism recovery short-lived. Cyprus, whose service industry including tourism, accounts for more than 80% of the economy is at risk of losing up to 2% of annual GDP if Russian and Ukrainian tourists do not return to the country.

Cuba saw an increase of 97.5% in Russian tourists in 2021, according to the country’s National Office of Statistics and Information. When that market collapsed, Cuba’s economic recovery plans were hit. Russians were expected to account for 20% of Cuba’s visitors in 2022, with far fewer tourists visiting the resort of Varadero.

Thai resorts are hoping for a growth in Middle Eastern visitors and Indians to help fill their hotels. Egypt is looking to increase visitor numbers from Latin America, Israel and Asia. Germans and others, including Iranians, are already replacing Russians in Antalya. In Vietnam, there are efforts to increase visitors from Korea, Japan, western Europe and Australia.

However, many destinations were unprepared for the shortfall in Russian tourists, and are not capable of replacing 30-40% of their market with new travellers.

Now that Russian tourists are cancelling trips to the resorts of Crimea as it comes under fire in the Ukraine war, some destinations are hoping Russians seek an escape by transiting through Serbia, Dubai and Qatar. Destinations such as Armenia, Vietnam and Turkey are also embracing the Russian payment system Mir to make it easier for Russian tourists to pay.

The efforts that destinations are making to replace Russian visitors will take considerable diversification, marketing and time, as tourists from new markets look for different activities. While Vietnam hopes for 5 million tourists in 2022, this is far from the 18 million visitors they received in 2019.

Even when the war ends, there is little likelihood that tourism will return to normal. Many European countries may not want to welcome Russian tourists for some time.

It will be interesting to see whether signs written in Russian in the Egyptian beach town of Sharm el-Sheikh or Varadero in Cuba will remain, or be replaced with Chinese or other languages in the upcoming tourist seasons.

Michael O'Regan does not work for, consult, own shares in or receive funding from any company or organisation that would benefit from this article, and has disclosed no relevant affiliations beyond their academic appointment.