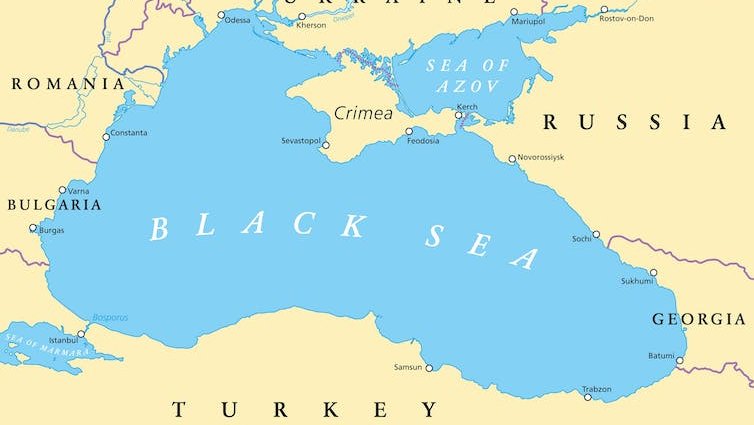 Ukraine launched its counteroffensive in the Kherson region on August 29, the success of which would have major military, political and symbolic consequences. This move has been made possible by Ukraine’s recent maritime successes that have reduced Russia’s ability to control the southern coast of Ukraine.

Six months after Russia began its invasion of Ukraine, the conflict has evolved from a land-based conflict into a multifaceted war with a substantial maritime dimension. The effects of the Russian blockade on the global food crisis have highlighted the importance of sea control. Yet the question of who controls the northwestern Black Sea is crucial at both a strategic and diplomatic level.

Against all odds, and without an operational navy, Ukraine has gradually taken the initiative at sea. In fact, Kyiv’s strategy for prevailing in this war of attrition has a significant maritime outlook. If it eventually translates into the liberation of the Kherson region, this maritime strategy will have proved effective in making the most of Ukraine’s agile thinking versus Russia’s focus on the land war.

At the start of the war, Russia secured an overwhelming domination of the northwestern Black Sea, but since April Ukraine has begun to challenge this. It started on April 14 with Ukraine successfully sinking the cruiser Moskva, flagship of the Black Sea fleet and an important piece of the Russian area air defence system. This eroded Russia’s ability to operate safely in the northwestern Black Sea. It also demonstrated the shortcomings of Russia’s limited “point air defence” onboard its surface ships.

When Ukraine regained control over Snake Island on June 30, the operational situation further improved. Snake Island was serving as a substitute for the Moskva in providing area air defence. Its loss meant that Russia was no longer in a position to effectively control access to and from Odessa, and was now dependent on its naval air force (that is land-based, notably in Crimea) to protect its Black Sea fleet surface ships. Consequently, the navy’s range is limited to about 20 miles from Crimea, if it is going to be able to remain under the protection of land-based air defences.

In practice, this drastically reduced Moscow’s ability to plan for an amphibious assault on the key port city of Odesa, and restricted its initial geostrategic objective to control the southern coast of Ukraine from Crimea to Transnistria.

On the diplomatic front, it also pushed Russia to agree a deal to export Ukraine’s grain on July 22. Indeed, as Moscow’s responsibility for the global food crisis became apparent (eroding its soft power in the global south), its ability to de facto maintain the blockade diminished as well.

Ukraine started a new phase in its offensive against Russia’s naval assets in August. The attack on the Saky airbase on August 9 had already damaged the Black Sea fleet air arm, further preventing Russia from safely operating its surface ships that rely on land-based air defence support.

This was followed on August 20 by an attack on the Black Sea Fleet headquarters in Sevastopol, reportedly using a drone. Although minor and rather symbolic, this incident contributed to the broader strategy of harassing Russian naval assets. It also contributed to Kyiv’s narrative, which has been to emphasise Ukraine’s ability to turn the tide in the south.

These developments will have critical consequences for the overall conduct of the war. Russia will be increasingly unable to strike from the sea. With its depleted navy, Ukraine will not be able to secure overall sea control but, as things stand, neither will Russia, which means that Kyiv will be able to plan some limited operations at sea. Demining capabilities are being prioritised (helped by the UK, with Royal Navy minehunting crews providing training to Ukrainians). But in the longer term, more could be done at sea, including perhaps operating antisubmarine ships or aircraft to deal with Russia’s remaining submarine threat.

Moving Ukraine’s offensive to the south – including by threatening Crimea itself – is having a broader impact by demoralising Russia, delegitimising Putin himself, and helping to alleviate pressures in the Donbas. The current counteroffensive in the south has been facilitated by Ukraine’s bold maritime strategy. Russia’s limited options to operate from the sea will make it easier for Ukraine to conduct land operations in the Kherson region.

Ukraine is a continental power, but Kyiv is adapting its war-winning strategy to the doctrine of the west. In a recent essay for the Australian Naval Institute, I termed this a “solidaristic society of maritime nations” whose members embrace the preponderance of seapower states over land powers. By controlling the global supply chain, maritime nations can produce strategic effects to win long wars. On the battlefield, they can effectively exploit their control of the sea in support of land-based operations.

We can assume that western allies of the Ukrainian president, Volodymyr Zelensky, have been clear about the importance of exploiting Russia’s long-term weakness as a land power. Moscow is unable to pursue its key maritime objectives, and equally has failed to use its maritime assets in support of its land-based objectives.

As Russia stalls on land due to a badly planned campaign and the exhaustion of its military resources, Ukraine has demonstrated agile thinking to gradually neutralise Russia’s Black Sea Fleet. This is likely to be instrumental for the counteroffensive in Kherson in the coming months.

Basil Germond does not work for, consult, own shares in or receive funding from any company or organisation that would benefit from this article, and has disclosed no relevant affiliations beyond their academic appointment.