Serena Williams: why many female athletes feel pressure to retire after becoming mothers 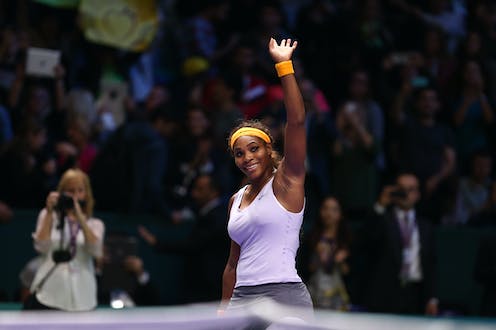 Serena Williams has announced she’s retiring from tennis. During her career, the 40-year-old has often been hailed as the best female tennis player, winning 23 grand slam titles. In 2017, Williams won the Australian Open while eight weeks pregnant, returning to play in 2018 after giving birth and even making the Wimbledon final that same year.

In an essay Williams wrote for Vogue, the main reason given for her retirement was wanting to expand her family. Williams is not alone in her decision. For many professional sportswomen, pregnancy and motherhood are often the main reasons they end their sports career.

And, as Williams acknowledged in her essay, it’s a decision male athletes often don’t need to make. “I never wanted to have to choose between tennis and family,” she wrote. “I don’t think it’s fair. If I were a guy I wouldn’t be writing this.”

There are plenty of examples of professional male athletes who have continued to play competitively despite becoming fathers. Take tennis player Novak Djokovic, for example, who even said becoming a father was good for his competitive play.

Research has confirmed this, with a study comparing male and female distance runners showing many women felt pregnancy carried an expectation that they would retire. Meanwhile men felt it was both “acceptable and worthwhile” to continue their career, even after becoming a parent.

Of course, there’s no denying the physical impact of pregnancy and childbirth, which can see women missing several months of training and competition as a result – something men just don’t have to experience. But this isn’t the only reason many women feel pressure to retire from competitive sport when they choose to become a mother.

First, dated cultural norms continue to persist, which fundamentally pit being an athlete against being a good mother. This way of thinking suggests that the perfect mother is selfless, solely focusing on caring for her children and her family.

But being an athlete requires a person to focus on themselves and put their needs first in order to compete at their best. This way of thinking can in turn create guilt, especially for someone who may still choose compete after becoming a mother.

Financial pressure can also be a factor, with many women experiencing a distinct lack of financial support from sponsors and governing bodies during pregnancy. Many stakeholders even assume that pregnancy will mean the end of the athlete’s career, so funding is often cut or removed.

Having the right support, whether from family, coaches or sponsors can allow a woman the opportunity to continue in sport, both in emotional terms but also in more tangible terms (such as having childcare). This may also be why many women decide to wait until the end of their career to start a family.

We also can’t ignore the fact that becoming a mother is hard not only physically but mentally, too. Many professional athletes travel extensively, have hours of training daily and competitions that last weeks. Combining a career with a growing family can be difficult, especially for athletes who may not have the same level of support as Williams did.

Of course, Williams’s situation is unique. She has had a long and very successful career, and even continued to compete for a number of years after giving birth to her first child.

While a desire to expand her family may be a driving force in her retirement, it’s likely that other factors also came into play, such as the frequent injuries she’s suffered recently. By choosing to retire before injury or performance decline hit she is taking some control of her retirement.

There has been a shift in recent years that has seen more women being open about their experiences of being a mother and an athlete and the challenges that might involve. Yet many women still remain concerned about how they may be judged for choosing to continue their career even after becoming a mother.

Women shouldn’t have to choose between being a mother or continuing their athletic career. But in order to make this possible, we need a better understanding of how to support athletic mothers, and what they need to manage their training and career both during and after pregnancy.

There’s still limited guidance on how to return to exercise after childbirth especially when the return is to elite level competition.

What needs to happen going forward is ensuring more women have a choice when it comes to competing and being a mother. This will include providing the right support, financial stability and information to women on how they can continue to compete during and after pregnancy.

Candice Lingam-Willgoss does not work for, consult, own shares in or receive funding from any company or organisation that would benefit from this article, and has disclosed no relevant affiliations beyond their academic appointment.

2022-08-23
Previous Post: Noise pollution is hurting animals – and we don’t even know how much
Next Post: A dog in France has monkeypox, worrying scientists that we won’t be able to eradicate the virus if it spreads to more animals