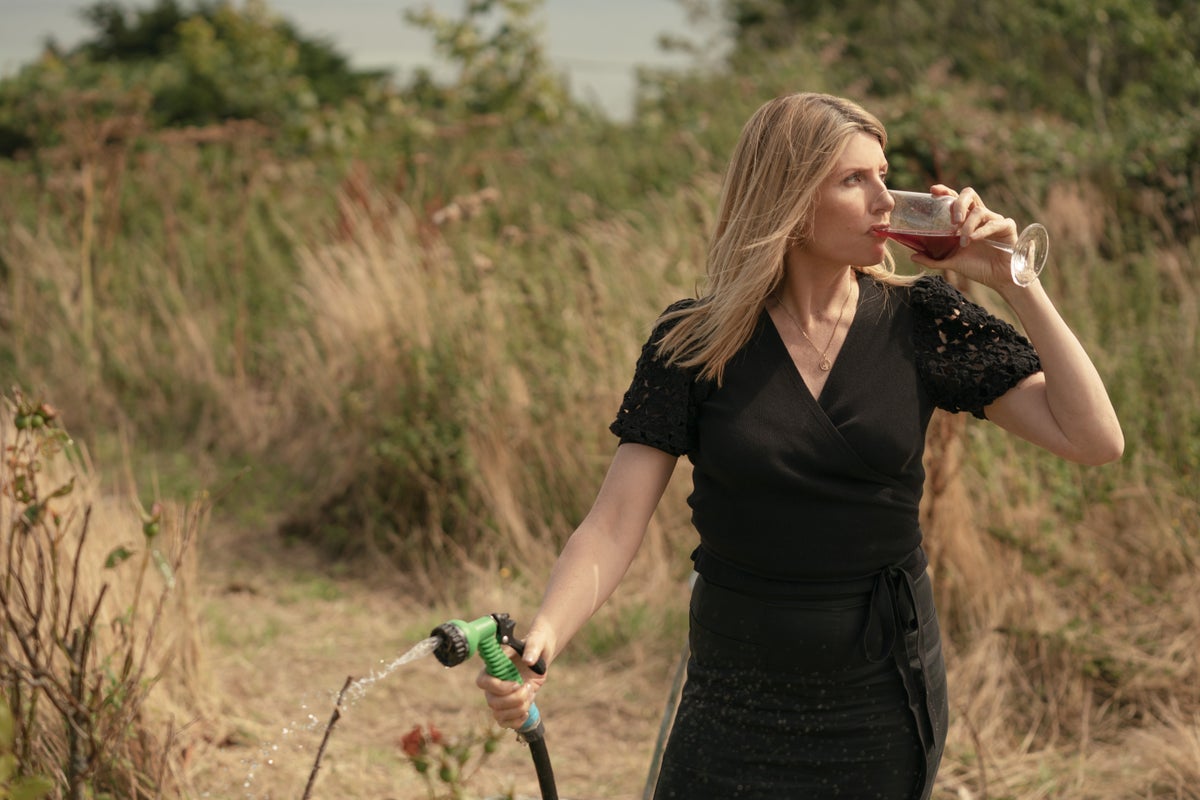 That’s really disappointing,” says Sharon Horgan when I tell her every woman I spoke to in the run up to our interview idolises her, but she still seems to be somewhat of an unknown entity for the men. “But it is true! Eighty-to-ninety per cent of who I get stopped by in the street are women — and a lot of those are Irish women,” she laughs.

“But it’s not a conscious decision at all, not at all,” she says. “I want to appeal to everyone. Obviously when things are niche it’s great, but my ambition is to have as wide an audience as possible.”

Yet, perhaps it’s no wonder her main demographic (so far) is female. The characters she writes are sweary, flawed and sometimes annoying. They spend their evenings googling nipple hair electrolysis and never make the school run on time. They are thrillingly relatable. “There is something about the way you get approached about those kinds of shows,” she says, listing Motherland, Catastrophe and Pulling. “People love that you’re putting real people on screen.”

Horgan, 52, has written (and starred in) some of the biggest TV shows of the last two decades — and much like Adele, another beloved London export, names albums after milestone ages, a classic Horgan show is fuelled by the stages of her own personal life: hazy 20s and 30s followed by the fraught familial relationships, marriage troubles and the absurd daily challenges of parenting for the 40s and 50s.

First came Pulling, a dark comedy about the messy travails and shags of three single women running riot in Hackney (she lived in squats around London during her 20s); Catastrophe follows a couple who conceive a baby during a one-night stand and decide to make a go of it (she became pregnant after six months of dating her now ex-husband Jeremy Rainbird); and Divorce starring Sarah Jessica Parker (she and Rainbird split amicably in 2019 and now live down the road from each other).

More recently Courteney Cox and Greg Kinnear starred in Horgan’s Shining Vale (series two is on the way), a comedy-horror about a middle-aged couple with the thankless task of raising teens in a suburban haunted house in Connecticut. Then there is the sublime Motherland: Horgan’s razor sharp, viscerally funny account of a bunch of narcissistic parents in Acton slapdashing their way through parenthood.

Her skill at pinpointing the ludicrous minutiae that makes up the female experience (albeit that of mostly middle class white women) paved the way for other superstar writers-slash-lead-actresses to follow — think Phoebe Waller-Bridge, Michaela Coel and Rose Matafeo.

Now, Horgan is one of the most in-demand scriptwriters in the world and one in a pleasingly long (and increasing) list of famous female TV writers. So has much changed for women in the industry? “It’s still not a level playing field, things have only started changing in the last five years or so and it takes way longer to make a shift that is that seismic,” she says. “It just takes time but I think the days of thinking that shows made by women are just for women are over.”

It’s precisely why Horgan set up her production company Merman with Clelia Mountford in 2014 in pursuit of finding, nurturing and championing female talent. “A lot of what we do is with female creators and that was purposeful, it’s how we wanted to begin the company and it made us quite distinctive in that area,” she says. Merman is responsible for bringing This Way Up by Aisling Bea (Horgan also stars alongside Tobias Menzies), Music Lovers written by Sara Pascoe and Motherland to our screens.

The company’s focus is broadening though. “We’re not not interested in more male-driven stories and stories through a male lens. We’re expanding as we go on and it’s exciting. I think it’s more about the tone of what we do more than who’s writing it. If it has a specific Merman tone then we’re all for it.”

Horgan is currently on a publicity blitz for Bad Sisters, a 10-part dark comedy-thriller she’s spent the last few years writing and shooting in her homeland of Ireland (“I think I’m going to shoot everything in Ireland from now on. I had such fun and I can go and see my mum and dad”). Considered, chatty and looking chic in a multi-coloured Bella Freud shirt dress, she is — despite glowy appearances — feeling shattered. “I just got back from America so I’m quite jetlaggy and my cat just had six kittens.” Far from the smaller cult comedies Horgan made her name crafting and sometimes struggling to get commissioned (the BBC rejected Catastrophe before Channel 4 took it), Bad Sisters is a big budget Apple TV+ project with glossy red carpet premieres in London and New York.

Morbid, hilarious and slick – it falls somewhere between White Lotus and Big Little Lies on the macabre-glam scale. Based on a 2012 Flemish show, it stars Horgan, Anne-Marie Duff, Eva Birthistle, Sarah Greene and Eve Hewson as the ultra-tight knit Garvey sisters who are united in grief after losing their parents at a young age and in their hatred for Grace’s (played by Duff) abusive, racist and misogynistic husband Jean Paul (pulled off chillingly by Claes Bang) — or ‘The Prick’ as the sisters call him.

It’s a tale about manipulative partners and the fierce bond of sisterhood — and it’s the latter which proved a pull for Horgan (she is one of five siblings). “I wasn’t sure what I wanted to do next [after Catastrophe] because I loved that show very much and it’s a bit tricky to jump headlong into the next thing,” she says. “It was the sisters, the big family of women, and them deciding they’re going to rescue their sister before she disappears entirely. Before he beats her into nothing. That’s what really appealed to me more than killing The Prick.”

Getting involved on a project of this scale didn’t come without anxieties. “When you do something like this which is a lot bigger – and it’s a thriller – everything is heightened to a certain extent. That’s the thing I worry about: making sure that those people and situations are grounded enough to pull people in. I hope that when people come to one of my shows that it’s because they know what they’re getting, so I don’t want to f*** with that.”

As such, she’s been feeling anxious in the run up to the release. “Oh my God — the past two weeks I’ve felt teary. That’s how anxious I get when I’m putting something out there. It’s so ridiculously exposing,” she says. “I’ve been working on it for two and half years, and you think that’s the hard part because you’re just grafting and it feels relentless and filming hours are grueling. But that’s a walk in the park compared to the lead-up to showing your work to the world. I get very anxious, I start sweating, I’ve been sweating all day. But wouldn’t it be weird to walk through the world and think you’re the shit?”

She is more willing to push the boundaries of her winning formula these days though. During the pandemic came the angry two-hander Together, written by Dennis Kelly and starring Horgan and James McAvoy. It saw a couple working through the breakdown of their relationship amid the heartbreak and financial worries of Covid. It was political and a bitter comment on the government’s handling of care homes as the virus swept through them. “I can’t escape the feeling that mum didn’t die — she was killed… by stupidity, by dumb f***ery,” says Horgan’s character. Next year will see Horgan take the lead alongside Michael Sheen in Best Interests — a four-parter about a couple whose daughter is diagnosed with a life-threatening condition and who doctors say should be allowed to die.

Is she making a tactical decision to move away from levity and tackle the serious issues? “I suppose it is a little bit to do with being older and thinking — this sounds morbid — but what do I want to spend the rest of my years doing,” she says. “And as much as I love entertainment just for entertainment’s sake — I spent a portion of the summer watching Love Island — I do want to feel like there is a bit more to what I put out there. That it’s more than just entertainment, that it’s actually saying something or touching someone and getting a response.

“I don’t want people to just enjoy it, I want people to go away thinking about it. I want it to stay with them, not necessarily in an ego-y way but I think most writers want that.” She’s started thinking about her legacy then? “I do think about legacy. I mean legacy I guess just sort of happens, you look back and you think ‘oh there’s all the stuff I made.’ It’s more about moving forward. I’m careful about what I do.”

Horgan is famed for her relentless workload — she’s about to direct her first feature film alongside writing “something much smaller” — but is more cautious than it might appear. “Even though it seems like I am multitasking to an almost obsessive degree, I’m not really,” she says. “A lot of the projects I’m involved with are through Merman and that way I get to scratch a lot of itches and kickstart a lot of shows. But I think I have a bit of a mad work ethic because I just always want to be able to do what I do. So I’m obsessive about it being good so people just want to keep working with me. It’s less about ambition and more about the obsession with the work being good.”

What’s her ultimate ambition? “I find it scary to aim really high because what happens when you get there and you just have to upkeep it? That just sounds exhausting. How do you Tom Cruise it for that long, I mean, Jesus Christ?”

Also on her monumentally long to-do list is a crusade to stop the government from privatising Channel 4. She made an impassioned speech on Instagram last year about her fears that some “rich weirdo” will buy it, “manhandle” it and make “terrible shows.” She seems extremely worried about what a sale could do to creativity in this country.

“I really am. I’m part of a think tank at Channel 4 — and I want to be more involved because I think it’s really important. I don’t think the public are fully aware of what it means and what Channel 4’s status is. If I’m honest, I’ve been a little bit shit. I go through phases of being really good and getting out there and using my platform to raise awareness about whatever feels like the most pertinent thing and then sometimes I’m shit and I watch Love island.” And with that, she’s off and onto the next thing, which — if she has anything to do with it — definitely won’t be shit.