Anne Heche: The life and career of the actor, plus our selection of her best films 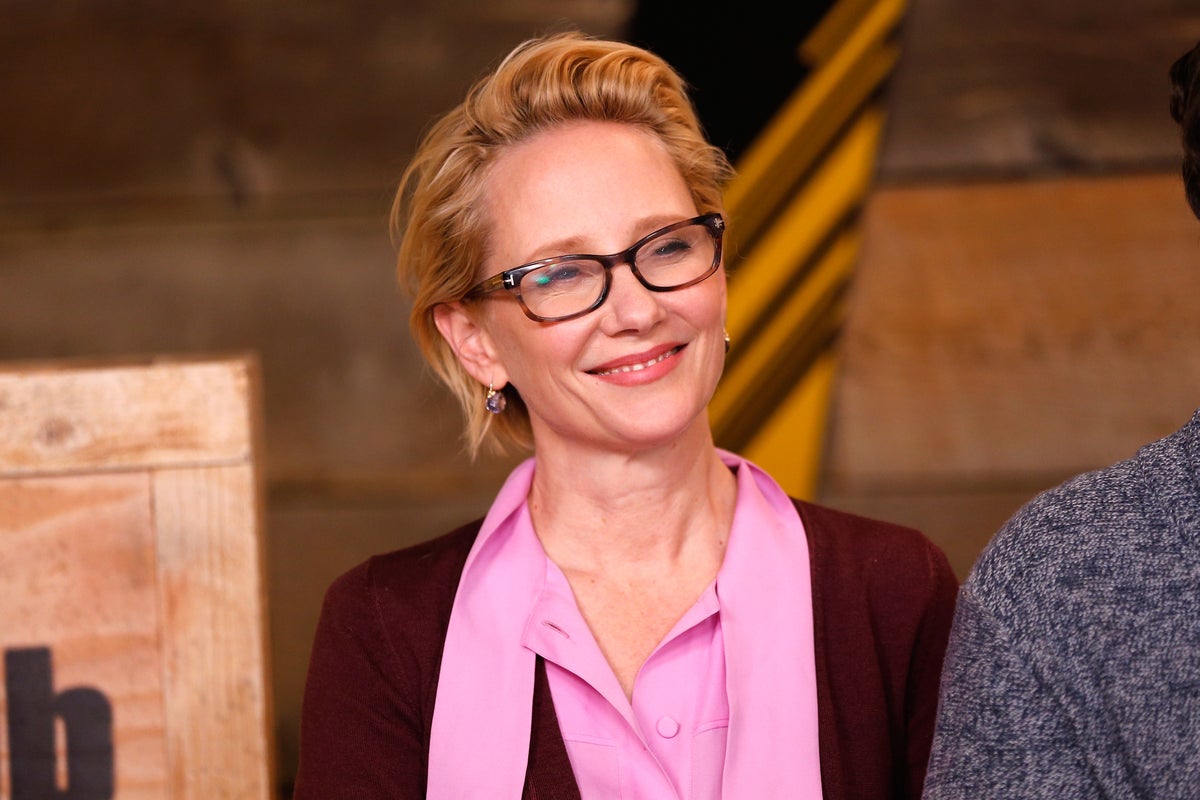 nne Heche, the actor best known for playing a string of leading roles in the late nineties, has been in a serious car crash. Reports are saying that she sustained significant brain injuries and is unlikely to survive.

The news has sent a shockwave across Hollywood. Although the actor’s best-known work was made decades ago, she has starred in dozens of films and TV shows since, including Nip/Tuck, The Michael J. Fox Show, and most recently in The Weeknd’s forthcoming HBO series The Idol.

Heche started her career playing twins Vicky Hudson and Marley Love on the NBC soap opera Another World for four years. She found fame in the late nineties, starring in the crime drama Donnie Brasco (1997) alongside Al Pacino and Johnny Depp, and in the disaster film Volcano (1997) alongside Tommy Lee Jones.

She also played Marion Crane in the 1998 Gus Van Sant remake of Psycho, opposite Vince Vaughn as Norman Bates.

But if Anne Heche is a little unfamiliar to you, here is a round-up of everything you need to know about the actor, including a breakdown of her best films and her history on and off screen.

Who is Anne Heche?

Heche was born in Ohio and was the youngest of five children. Her family moved around a lot during her childhood, and she even reportedly lived in an Amish community at one point. The family was financially strained, and would sometimes have to stay with family friends or in homes provided by the church.

She joined the theatre when she was 12 years old to bring in some money. Speaking to The Telegraph in 2011 she explained: “I got $100 a week, which was more than anyone else in my family. We all pooled our money in an envelope in a drawer and saved up enough to move out after a year.”

“I found heaven on that stage,” she added, “I’d been given an opportunity to experience a life and a joy that was not in my family.”

Her father died of HIV/Aids a year later. In her 2001 memoir Call Me Crazy, Heche said that he raped her repeatedly throughout her childhood, though her mother and sister came out to vehemently refute her claims.

Subsequently, her brother was killed in a car accident (Heche believed it was suicide), the family moved to Chicago, and when Heche was 16 she was scouted for a role on Another World.

This tough start was not the end of Heche’s troubles: her estranged sister Susan would die early of brain cancer and her sister Cynthia would die in infancy of a heart defect. Her mother, who became a Christian therapist, never acknowledged Heche’s version of her childhood and Heche remained distanced from her sister Abigail until much later in her adult life.

Speaking to The Telegraph about her mother she said: “Forgiveness is a funny word for me. I’m OK with my mother living her life the way she wants to live it, and I’m OK with her not participating in my life the way I want to live it.

“Love to me is an action, it’s the way you behave, and that’s how you show it. I cannot understand her idea of love, so it’s safer for me to not debate it. And that’s how I’ve found peace with her. I don’t know if that’s forgiveness or not.”

Despite all of the family tragedies, Heche was a talented actor and began to be recognised for her work. She won a Daytime Emmy Award and a Soap Opera Digest Award in 1991 and 1992 for her role in Another World.

She was nominated for Satellite Awards for her work in the 1997 film Wag the Dog, for the 1998 remake of Psycho and for the 2004 film The Dead Will Tell.

She starred in dozens of films and TV shows, including the 1998 film Six Days, Seven Nights opposite Harrison Ford, the 2001 film Prozac Nation with Christina Ricci and Jessica Lange, the 2004 film Birth alongside Nicole Kidman and Cameron Bright and the 2004 film Sexual Life alongside Azura Skye and Elizabeth Banks.

But, despite an arguably stellar career, it could have been much better, as the big parts all but dried up after Heche started dating Ellen DeGeneres. According to reports, the duo met at the 1997 Vanity Fair Oscar party and they fell madly in love. The New York Times Magazine said they became “the most famous lesbian couple in America”.

That was the end, apparently, of her leading lady roles: after Six Days, Seven Nights she wasn’t offered any more. “How could [the relationship] destroy my career? I still can’t wrap my head around it,” she said to The New York Times Magazine in 2009. Heche was also seen in some quarters as an opportunist because she’d never mentioned that she was gay or bi before.

That wasn’t the end of the complicated relationships either. Between 2001 and 2009 she was married to cameraman and actor Coleman Laffoon and the two share a son. It all ended badly: In 2007, an article headlined, ‘Anne Heche’s Husband Says Actress Is a Bad Mother,’ was published by The San Jose Mercury News.

The duo had apparently had a deal where Heche went to work and Coleman stayed at home, meaning that she paid spousal support when they split.

“I pay an extraordinary amount of money to him, and it’s unfortunate because it is what I believe keeps him from getting a job,” Heche said to The New York Times Magazine. Heche had to pay Laffoon half a million dollars as well as $3,700 a month.

Of her subsequent relationships, one of the most significant was with Canadian actor James Tupper. They share a son Atlas, who was born in 2009.

Tupper shared his thoughts online after the news about her car accident broke. In an Instagram post, he said: “Thoughts and prayers for this lovely woman, actress and mother tonight anneheche [sic] we love you.”

In 2000, Heche had a psychotic episode where she turned up at a stranger’s house, took a shower and started watching a film before the resident called emergency services. It turned out that she was under the influence of ecstasy. She was taken to hospital.

According to reports, the actor had an alternate personality called Celestia, who she had apparently created in order to protect herself during her painful childhood, and she later explained that she had created a fourth dimension in her mind that also helped her to escape from reality.

“I’m not crazy. But it’s a crazy life. I was raised in a crazy family and it took 31 years to get the crazy out of me,” she said.

Talking about the fallout of her childhood she added: “I drank. I smoked. I did drugs. I had sex with people. I did anything I could to get the shame out of my life.”

However, happily, this incident wasn’t the start of the end for Heche. She recovered – working hard, gaining a lead role in the HBO series Hung in 2009. She turned up for filming only a week after giving birth to her second son.

“I want my family to have food on the table,” she said to The Telegraph about her work ethic. “I’ve always worked hard.”

She went on to have lead roles in the NBC dramas Save Me and The Brave and would feature in the 2016 film Catfight, 2017 film The Last Word, and 2019 film The Best of Enemies.

“It’s interesting when all of a sudden you’re the older woman,” she said to The New York Times. “I had to ask myself: ‘What am I not confident about? Why does this scare me?’ As a theme in my life, I’ve always looked at how I can rid myself of shame.”

In another moment in the same interview, she said: “People wonder why I am so forthcoming with the truths that have happened in my life, and it’s because the lies that I have been surrounded with and the denial that I was raised in, for better or worse, bore a child of truth and love.”

Very loosely based on the true story of an FBI agent who infiltrated a New York City crime family in the Seventies, this crime drama had Heche playing Maggie, the wife of Johnny Depp’s character, agent Joe Pistone. Al Pacino also starred.

An unusual premise, in this disaster film Heche played a geologist and seismologist who had to try and safely divert lava away from Los Angeles. She played opposite Tommy Lee Jones, the head of the city’s Emergency Management team.

An early slasher film from Venom director Jim Gillespie, the film starred Jennifer Love Hewitt, Sarah Michelle Gellar and Muse Watson alongside Heche. It was based on the novel of the same name by Lois Duncan and had a great premise: a young group kill someone in a car accident.

Some months later someone starts stalking them, sending them anonymous letters saying ‘I know what you did last summer’. Things escalate very quickly.

It’s never a good idea to redo a Hitchcock film – they’re just too good. Nevertheless, Heche is great in this 1998 remake where she steps into Janet Leigh’s role as Marion Crane. A brave move indeed.

Arguably Heche’s most famous role, she plays Robin Monroe, a fashion editor from New York who gets stranded with pilot Quinn Harris (Harrison Ford) after a powerful storm forces their plane to land.

A remake of the 1989 French film Force Majeure (not to be confused with the 2014 Swedish comedy-drama of the same name) this drama-thriller starring Vince Vaughn, Joaquin Phoenix and Heche follows three friends who are on holiday in Malaysia. Two of the friends return to New York, but the third stays.

Years later he is arrested on a drug possession charge back from their time together. The two friends are left in a moral dilemma about whether they should return as Lewis faces the death penalty.