TYSON FURY’s dad has a sneaking suspicion Anthony Joshua will get the job done in his high-stakes rematch with Oleksandr Usyk.

AJ will bid to reclaim the WBA, WBO IBF and IBO heavyweight titles from the slick southpaw in a potentially career-defining Saudi showdown on Saturday week.

Joshua was effortlessly turned over by the undefeated Ukrainian last September, but John Fury believes the Brit could very well have his hand raised second time around.

During a recent appearance on talkSPORT, John said: “Don’t be surprised if AJ pulls it off.

“I’ve got a sneaky feeling again that AJ’s going to do it and he has this remarkable way of bouncing back doesn’t he.”

A mouthwatering Battle of Britain against WBC king Fury awaits AJ if he wins his desert dust-up with Usyk. 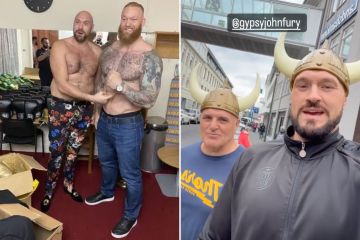 And dad John will urge Tyson to face the winner in a multi-million-pound undisputed fight later this year.

He said: “If Joshua gets the win, then it’s all to play for isn’t it. Even I’d want [Tyson] to do that, I’d pressure him to do that.

“And Usyk, why not? He can beat them both at a canter so why not?”

A timid Joshua axed former long-time coach Rob McCracken after being outboxed by Usyk in their Tottenham tussle.

And he’s vowed to get back to his aggressive best under new head trainer Robert Garcia.

He said: “The fight with Usyk, in my mind, was going for 12 rounds.

“That was my game plan because I thought I could compete with him as a boxer.

“And I think he won two more rounds than I did. That’s how he became champion.

“So the goal now is to go back to basics and go for the knockout.

“I always feel, when I’m sparring or fighting people, I actually see their spirit get dampened.

“Honestly, when you’re looking at this person directly in their eyes and watching their body, you can read the body and punch after punch this person is slowly fading.

“Now when you’re boxing, the art of boxing is to hit and not get hit. So you’re kind of boxing to stay away. That’s not really my style.

“My style is to be up close and personal and make it difficult for the person. So that’s the game plan.”