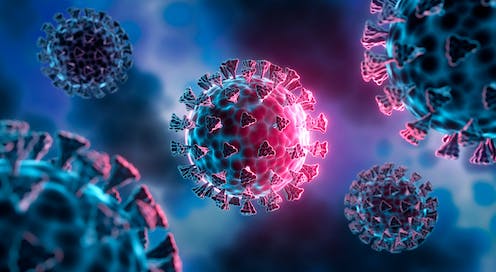 As the COVID pandemic rolls on, we’re becoming all too familiar with the continued emergence of new variants. Some can thwart immunity from vaccines and prior infections, increasing their capacity to disrupt our everyday lives. But where do new variants actually come from?

Variants develop through changes in the genetic code of the virus. This happens most commonly through mutations, essentially copy errors in the virus’ genetic information. Variants of concern are variants that have been identified to have a significant impact on transmissibility, severity of disease or immunity, likely to change the epidemiological situation of the pandemic.

Each time we’re infected with SARS-CoV-2 (the virus that causes COVID), our bodies produce a large number of virus particles with a range of genetic differences to the original infecting virus and to each other. Many of these mutations will have no effect on the virus.

Occasionally, however, mutations will occur that give the virus an advantage. For example, delta was more transmissible than earlier variants because of a mutation in its spike protein (a protein on the surface of SARS-CoV-2) allowing the virus to infect our cells more easily.

Even though we know a lot about how mutation occurs, it’s incredibly difficult to pinpoint where specific variants came from. But recent studies have investigated potential sources of new SARS-CoV-2 variants, including people who experience chronic COVID infections and animals.

A chronic infection is where a person is actively infected with SARS-CoV-2 for a long period of time. This is different to long COVID, where symptoms persist well after the patient has recovered from the initial infection.

Chronic cases are rare and, to date, all documented cases have been in people with severely suppressed immune systems. These might be people undergoing treatment for cancer or following an organ transplant, for example.

Several studies have shown that the rate of mutation in these patients is higher than in those who are infected for a shorter time. Immunocompromised patients have a reduced immune response to infection and are often undergoing a range of treatments, both factors which are thought to allow a broader variety of mutations to develop. This is compounded by the longer period of time for which they may be infected.


While new COVID variants do appear more likely to form in patients with chronic infections, the good news is they don’t seem to pose a significant threat.

The researchers suggest the the majority of variants arising from chronically infected patients enhance virus replication, but are not characterised by improved transmission. This means they’re good at replicating in an infected person, but not as good at spreading from person to person.

The study demonstrated that there was no evidence of onward transmission from the patients with chronic infections to other people, which would be essential for a new variant to take hold and become a variant of concern. Although the authors note this may be due to human behaviour, rather than virus evolution, as immunosuppressed patients are likely to be confined to their homes.

SARS-CoV-2 is likely to have been originally transmitted to humans via an animal market in China, and throughout the pandemic, we’ve learned that the virus can infect a variety of animals.

So another suggestion is that animals could be the source of new SARS-CoV-2 variants. The idea is they contract the virus from humans, which then mutates during infection in the animal host, before spreading back to humans.

A species jump (or “zoonosis”) can only occur when multiple factors align. These include virological factors (for example, mutations that allow infection of human cells) and environmental factors (for example, close contact with infected animals). Zoonosis is not common, but is becoming more regular due to climate change and deforestation, which put more animals in contact with humans.

One study analysed the genetic code of omicron and showed high levels of similarity in the spike protein with that of mouse coronaviruses. The authors suggest the omicron variant may have occurred as a result of a human-to-mouse infection, mutation in the infected mouse, followed by transmission back to humans.

But often, when a virus infects a new host, such as a human, it’s unable to be transmitted further to other humans. The virus has to quickly adapt to allow it to thrive in the new host and go on to infect others. Indeed, where animal-to-human transmission of COVID occurred on Dutch mink farms, while we did see the virus mutate, there was no evidence of further transmission from the farm workers into the wider community.

Similarly, we’ve observed many instances of people infected with bird flu through prolonged close contact with birds. But there have been very few events of further transmission to other humans.

So although new variants may form in animals occasionally, it seems unlikely that they’re being re-transmitted back to humans and spreading.

Read more:
Human catches COVID from a cat – here’s why this new evidence is not cause for panic


While we can know geographically where new SARS-CoV-2 variants were first detected, it’s almost certain we’ll never know exactly where they come from. But as virus evolution is based on a combination of chance events such as mutation and human behaviour, it’s most likely that variants of concern are formed in a wide range of infected patients across the world.

With so many people being infected at once, many living in dense cities and travelling across the globe, the chances of viral evolution and onward spread of new mutants are increased. If large numbers of infections continue globally, more variants will continue to arise.

Grace C Roberts works at the University of Leeds and receives funding from the MRC.

2022-08-08
Previous Post: Hosepipe ban: should you snitch on your neighbour’s water use? A philosopher’s take
Next Post: Man Utd labelled ‘desperate’ by Neville as Keane tears into club over Arnautovic