Limerick bridge ‘a constant, painful reminder’ for families of workers who drowned 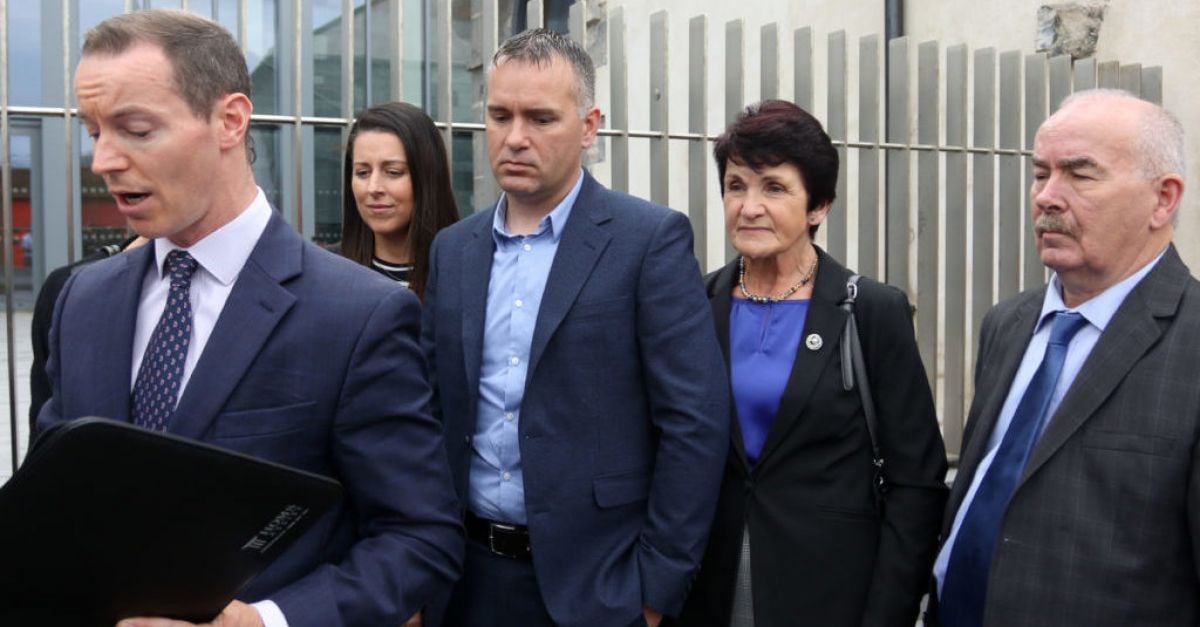 Two men plunged to their deaths in the River Shannon after a safety mechanism on a crane which was holding a steel cage carrying them failed to operate, a court heard Wednesday.

There were emotional scenes at Limerick Circuit Criminal Court when members of both deceased’s families left the room as video footage was played of the moment the steel cage that carried their loved ones plunged into the river.

A safety mechanism aimed at preventing weight overloading on the crane failed, resulting in “unbearable stress” on a wire rope that “snapped” which was holding the cage carrying the men above the river, said senior prosecuting counsel Shane Costelloe SC.

The incident occurred at around 3.40pm in the afternoon of August 29th, 2015, and was witnessed by members the public.

The two deceased, Bryan Whelan (29) of O’Briensbridge, Co Clare, and TJ O’Herlihy (36) of Castleisland, Co Kerry, drowned as they could not escape from the steel cage.

Both stonemasons had been harnessed into the cage and were wearing life-jackets, as was legally required under health and safety regulations, while they carried out specialised repair works on the south side of Thomond Bridge in Limerick City.

A third worker, Paul Murphy of Askeaton, who was also working on the platform at the time, managed to free his harness and was rescued in the Shannon estuary by emergency first responders.

Both firms pleaded guilty to breaches of the Health and Safety at Work Act.

Palfinger supplied the winch crane to Nationwide on March 12th, 2003, but unbeknown to Palfinger, the crane’s user manual was missing a chapter on the importance of frequently carrying out testing of the crane’s overload protection system, which it later emerged had failed on the day of the “catastrophic tragedy”.

The crane was mounted onto a flat-bed lorry on the bridge with an extendable telescopic winch that held the men in the platform cage via a wire rope or cable.

Palfinger pleaded guilty that it failed to take steps necessary to ensure Nationwide was provided with adequate information about the crane and its operations to ensure that when it was in use it would be safe.

Nationwide pleaded guilty that, being an employer, it failed to ensure that contracted workers were not exposed to risks to their safety, health and welfare, and that it failed to ensure the winch crane was in a safe condition, in particular, the overload protection system, and “as a consequence TJ O’Herlihy and Bryan Whelan died”.

If I could turn back time I would tell dad never to take the job, so he could be with us

Mr Costelloe read out a victim impact statement written by Mr O’Herlihy’s partner Therese ‘Tess’ Wigsten, mother to their two young children Conor (10) and Katie (7), who all travelled to the court hearing from their home in Sweden.

“Conor was three years old and Katie was six months when their dad died, we were not the ‘typical or normal’ family because our son has a progressive mitochondrial disease and has special needs, he needs full-time help with everything,” wrote Ms Wigsten.

“My children have lost one of the most important persons in their life, their dad; Katie didn’t even get to know him, Katie will never experience how it is to be ‘daddy’s girl’”.

Katie Wigsten wrote how “life would have been more beautiful and nicer if dad was alive, we would have been a family of four, he could help me with homework and pick me up from school, and if I could turn back time I would tell dad never to take the job so he could be with us”.

Conor Wigsten wrote: “I miss my dad, I wish he was here to help me, to carry me and play with me, I wish he could help me in school.”

Therese Wigsten continued: “What hurts most is that Katie has had to grow up faster, take more responsibility than other children her age, because I have to help Conor all the time (feed him, change his nappy, give him medicine, push his wheelchair, carry him and so on), and so Katie will always be second, because she has no other parent that can give her the love and attention she needs when the other is looking after Conor.”

“I have lost the love of my life, every day is a struggle, our family is broken,” she added.

Bryan Whelan’s bother, John Paul Whelan, speaking on behalf of his family, told the court: “What haunts us most as a family, other than being without Bryan, is the tragic circumstances of his death, it is a constant and conscious effort that weighs tirelessly on each of us to not dwell on Bryan’s final moments of fear and distress as we know he fought to survive on that fateful day.

“Bryan was excited to be working so close to home and on a project such as Thomond Bridge, which he took great pride in. It’s hard to believe it ended in such a tragedy. The bridge now serves as a constant, painful reminder of the devastating and disastrous events of that day.

“While we are relieved that responsibility was accepted by Palfinger Ireland and Nationwide Crane Hire, we have suffered immeasurable grief and heart-breaking loss, but it is our hope that lessons have been learnt and other families will not have to endure the torture and turmoil of such a catastrophic event which could have been avoided.”

Dermot O’Brien, lead investigator at the HSA, said the two defendant companies had cooperated fully with the authority’s probe, which he hoped would help “to try to prevent further similar accidents recurring”.

Judge Tom O’Donnell said it would be “inappropriate” to deliver an immediate judgment given he had listened to a “significant amount of evidence and deeply poignant victim impact stamens”.

He adjourned sentencing to October 7th.

2022-07-27
Previous Post: Four ways your TV subscriptions could change because of the cost of living crisis
Next Post: Kojey Radical on why ‘the UK makes the best black music in the world’