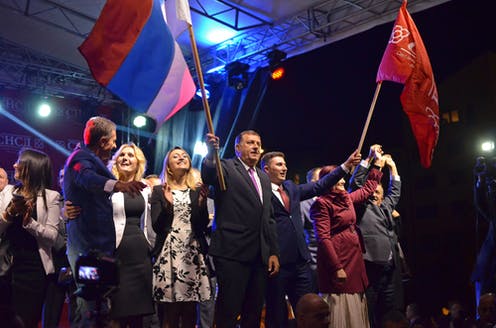 The EU continues to keep Albania, Bosnia and Herzegovina, Montenegro, Kosovo, North Macedonia and Serbia on the waiting list to join, despite the possibility that the region could shift closer to Russia.

Russia has long been an influential force in the western Balkans from helping to create pro-Russian associations, to building significant stakes in oil and gas projects.

Moves to stoke up ethnic tensions between Bosnians and Serbs also appear to have Russian approval. Meanwhile, Milorad Dodik, the current Serb member of the presidency of Bosnia and Herzegovina, has supported the creation of the two self-declared republics in Ukraine, lining up behind Russia’s president Vladimir Putin.

Bosnia and Herzegovina has a three-member presidency made up of one member from each of the country’s three major ethnic groups: Bosniaks, Serbs and Croats (in order of size). The state comprises two autonomous entities: the Federation of Bosnia and Herzegovina and Republika Srpska, and a third unit, the Brčko District.

Dodik is also behind plans to establish a new Serb army, and aligns to a separatist movement that could split Bosnia and Herzegovina in half. Germany has just announced it will freeze €120 million (£101 million) worth of infrastructure projects in Bosnia’s Serb region because of concerns over secessionist policies. And the UK government announced sanctions in April 2022 against Dodik, including a travel ban, for undermining the region’s stability.

Analysts are worried that Dodik’s movement could threaten the uneasy peace created after the Balkan war, which ended in 1999.

But despite this, EU officials did not even participate in the press conference scheduled with the leaders of the western Balkans after the recent two-day summit between the two groups. The most obvious explanation for the impasse is that another priority always takes precedence – currently Ukraine.

But this approach has been taken as a snub, especially in Bosnia and Herzegovina, Kosovo and North Macedonia. The EU is creating further resentment by taking a different approach with Ukraine to the one that has been set out for the western Balkans.

Russia’s plans for the Balkans

The EU’s attitude will not go unnoticed by Russia as it continues its plans to further undermine the political and public support for the EU and convert the nations into its supporters. It already has had some success in Serbia, where only under half of the population now support joining the EU.

Meanwhile, the western Balkan states are experiencing a massive brain drain because of abysmal economic growth and a lack of political stability. Young people are moving to EU countries in search of jobs.

The region is projected to lose more than half of its citizens in the next two decades. And with the slow pace of the enlargement policy and there could be little left to integrate into the EU.

The western Balkans first started discussing EU membership in the mid-2000s, but there’s still no consensus from EU members on their future entry. The time the process is taking is fuelling anti-EU attitudes and leaving more space for Russia and China to increase their influence.

But the EU needs these allies to combat major security challenges. Otherwise, it leaves behind an increasingly fractured region, where Russia has cultivated nationalist groups and uses misinformation to undermine pro-democracy narratives.

How does Ukraine compare?

Ukraine is unlikely to start accession negotiations with the EU until it has control over its borders and meets a series of criteria identified by the European Commission. These include vetting of Ukraine’s judges and prosecutors, and showing a track record (prosecutions and convictions) in the fight against corruption and high-level organised crime, as well as the implementation of an “anti-oligarch law” to limit the undue influence of corrupt individuals in economic, political and public life.


Certain conditions must usually be met before a country can be granted candidate status, as was the case with Albania. But the EU recommends granting candidate status to Ukraine on the “understanding” that it will take tangible steps towards meeting the conditions. However, talks with not be opened until it clearly shows it is upholding the rule of law and the fight against corruption.

Albania, a Nato member, recently said the lack of EU accession commitments to the western Balkans was a regional security issue and requested Nato set up peacekeeping operations to counter Russian influence. It also announced that it will establish a Nato naval base along its Adriatic coast.

The UK also called for reinforcements to the Nato mission in the western Balkans, especially in Bosnia and Herzegovina to promote stability and security, and counter Russia’s regional disinformation.

However, by keeping the western Balkans waiting since 2003, the EU has seriously diminished its influence. Both Albania and North Macedonia met the criteria to open accession talks in 2018.

The lack of a timeline for these candidate countries to join means there are fewer incentives to reform. There are also some in the region who point to current member states like Hungary whose democratic standards seem similar, if not the same, as theirs.

The EU is currently debating switching to a qualified-majority voting procedure on foreign and security policy. This comes after Hungary blocked the EU imposing sanctions against Russia over Ukraine, unless it obtained more money from the EU COVID-19 recovery fund.

Moving to qualified majority voting requires amendments to the EU treaty. However, if the EU agrees to extend qualified majority voting into new policy areas, it might also extend it to its enlargement policy, so that candidate states are not blocked or used as bargaining chips by populist governments supported by Russia, as Bulgaria is doing to North Macedonia, or Hungary might do in Ukraine in the future.

If the EU does not take Russia’s rising influence in the western Balkans as seriously as it should, it risks making enemies on its borders, and right now, with the Ukraine-Russian war blazing, that would be very negligent indeed.

2022-07-19
Previous Post: UK abortion laws are more precarious than they seem – replacing the Human Rights Act could unsettle them further
Next Post: Senior Research Associate or Research Fellow in Medical Statistics or Epidemiology