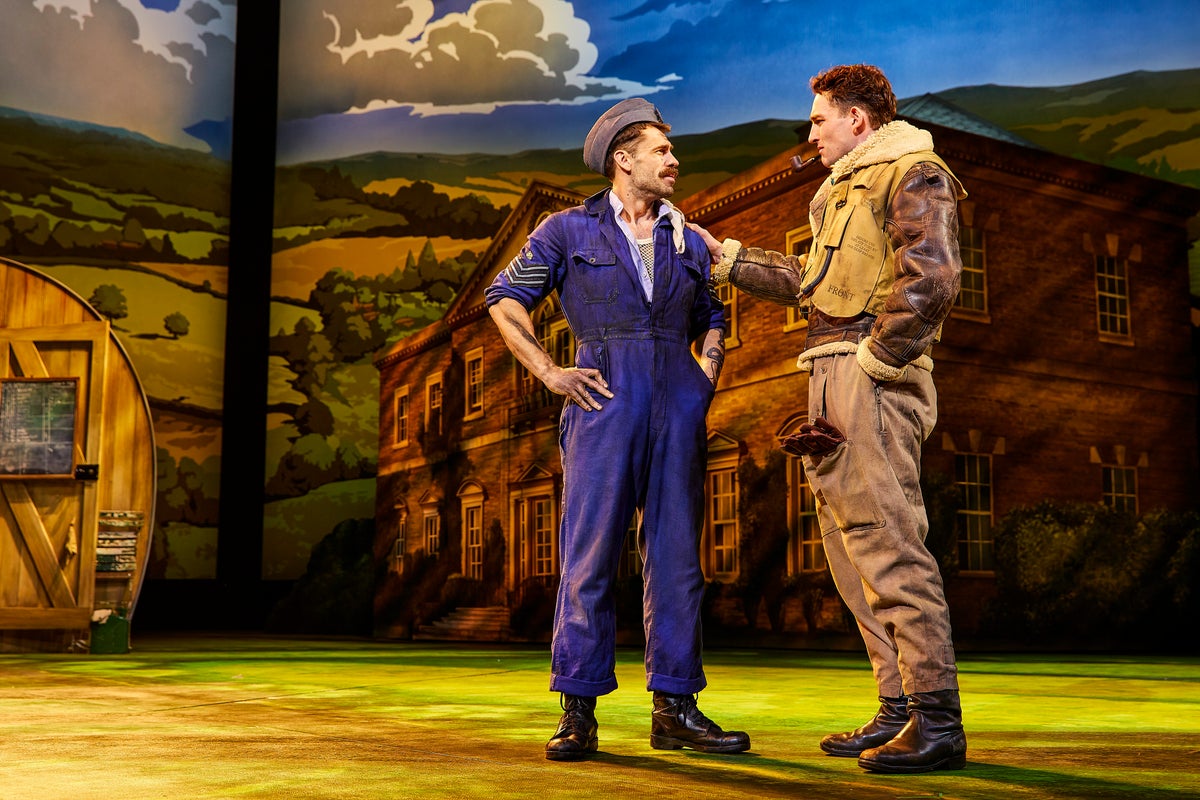 o, comic lightning does strike twice. By roughly transposing Sheridan’s The Rivals to an RAF squadron stationed at a Sussex country house during the Battle of Britain, Richard Bean and Oliver Chris create something every bit as uproarious and ribald as Bean’s One Man, Two Guvnors, which took comparable liberties with a Goldoni classic.

There’s the same ungoverned humour, giddy abandon and metatheatrical playfulness: the same sense of primal urges pulsing underneath. But Jack Absolute is also completely its own thing, taking jokey aim at British class-consciousness and exceptionalism, as well as sexism, xenophobia and “warstalgia”.

Unlike OMTG – in which Chris, before he became Bean’s co-writer, played the foil to James Corden’s virtuoso central performance – it’s an ensemble piece. Originally scheduled for 2020 it has undergone cast changes and the replacement of director Thea Sharrock by National Theatre resident Emily Burns, to no obvious harm. It’s hilarious, if exhausting.

Here, the verbal misplacings of Caroline Quentin’s Mrs Malaprop have a smutty edge. “Flatulence will get you everywhere,” is one of the milder examples, though she also mixes up “clematis” and “clitoris” and talks about “passing a significant millstone” on her birthday. Malaprop’s liberated niece Lydia Languish (Natalie Simpson) has a job in the Air Transport Auxiliary flying Hurricanes to airbases, and a romantic fantasy of being mates with her maid and getting off with bluff northern mechanic Dudley Scunthorpe (Kelvin Fletcher).

It feels invidious to single out performances, but Howard as the sullenly deadpan Lucy, and James Corrigan as the Antipodean Bob Acres – irrepressible whether rebuffed in love or stung by a swarm of bees – do stand out.

Sheridan’s absurd web of deceptions and misunderstandings is here augmented by CGI ariel dogfights, a dazzling all-cast jitterbug number and Mrs Malaprop doing the splits while playing the ukulele. Alongside the laddish jokes and slapstick there’s a sly gag about the Bechdel test, which judges a drama’s feminist credentials. Designer Mark Thompson supplies a witty set of dolls’ house rooms unfolding on an English lawn.

The way Bean and Chris lob anything they find funny into the mix is audacious, but the script is also deceptively finely tuned. This knowing mix of satire, filth, clowning, pastiche, wartime derring-do and romance absolutely hit my sweet spot. It won’t be to everyone’s taste, but not even the hardest heart could entirely resist its machine-gun barrage of humour.

2022-07-15
Previous Post: SAS accused of unlawful killings in Afghanistan, just a year after the British government made it harder to prosecute such crimes
Next Post: Russia’s neighbours are looking towards the EU or China for protection