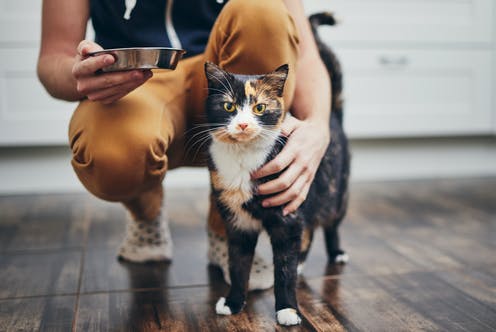 Since the pandemic began, there have been several documented cases of humans transmitting SARS-CoV-2, the virus that causes COVID-19, to their pets. But the reverse has been rarer – until recently, hamsters, mink and white-tailed deer were the only animals reported to have spread SARS-CoV-2 to people.

Now, for the first time, a group of researchers in Thailand has demonstrated a likely case of transmission from a cat back to a human.

So should we be worried about the possibility of catching COVID from our pets? Probably not on the basis of this study. But there are areas where pet-to-human transmission could be a concern in the future.

Read more:
How we found coronavirus in a cat


The study reports that a father and his adult son, who caught COVID in Bangkok, were transported 900km to a hospital in the Hatyai district of Thailand because there were no hospital beds available in Bangkok. The patients travelled by ambulance together with their pet cat. There is no mention in the study as to why the cat was with them.

Careful sequencing of the virus from the father and son, from the cat and from the veterinarian showed that they were identical and, importantly, different from the strains circulating in the area around Hatyai. The very strong inference is that the father, son and cat had caught COVID in Bangkok, while the cat infected the veterinarian during the examination.

SARS-CoV-2 is already known to infect a range of domestic and wild animals including bats, cats, dogs, mink and deer. Based on comparing the receptors on the surface of the virus and on a range of animal cells, scientists predict that it could infect many more species if the opportunity arose.

Pet ownership hasn’t been identified as a risk factor for COVID. In one study walking the dog increased COVID risk, but this could of course be linked to a range of sources of infection.

In the Netherlands, where there was evidence of mink-to-human transmission, the mink were kept in cages where transmission between the mink was rife, and where the farm workers were heavily exposed to them.

Even in this latest study from Thailand, only one of the three veterinarians became infected – probably because the cat sneezed in her face. This would have exposed her to a high dose of virus. She was wearing a mask covering her mouth and nose, but not eye goggles or a face shield.

The advice from public health agencies during the pandemic so far has been to try to minimise your contact with your pet if you have COVID, and minimise any contact between your pet and other people and their pets. Overall, there seems to be no reason to change this advice.

There are concerns about the possibility that transmission through any non-human species might result in the evolution of new, unpredictable variants. These variants might, for example, be better able to escape immunity generated by vaccination or prior infections, or cause more serious disease.

In the Thailand case, as the authors hypothesise, the most obvious assumption is that the father and son contracted SARS-CoV-2 in Bangkok, transmitted it to their cat, and that the cat then infected the veterinarian. The similarity between the genetic sequence of the virus in all of them would suggest no mutations occurred in transit through the cat.

But another possible scenario is that the cat was infected first and subsequently transmitted the virus to its owners and then, independently, to the veterinarian. This is less likely because cats seem to shed SARS-CoV-2 for a shorter time than humans, but it’s still possible.

If this had happened, it would be impossible to assess whether there had been any mutations in transit through the cat without comparing the sequence of the viruses from the father, son, cat and veterinarian to those circulating in Bangkok where the cat would, presumably, have become infected.


We have seen mutations to the virus occur in mink-to-human transmission. But culling of mink and isolation of humans prevented further transmission of these mutated versions of SARS-CoV-2, and the symptoms in people who became infected from mink weren’t any more severe than in those who caught the virus from other humans. In cats who have contracted SARS-CoV-2, mutations have occurred but, so far, there don’t seem to be any consistent patterns which might suggest a problem.

New SARS-CoV-2 variants capable of escaping immunity or causing more severe disease could derail our progression to normality. At the moment, there’s little evidence that a cycle of human-to-cat, cat-to-cat or cat-to-human transmission (or a cycle involving any other pets) could contribute to the appearance of such variants in future.

That said, it’s important we maintain good surveillance mechanisms in humans, pets, livestock and wild animals to identify any changes in the SARS-CoV-2 virus which could lead to new variants of concern down the track.

Mick Bailey does not work for, consult, own shares in or receive funding from any company or organisation that would benefit from this article, and has disclosed no relevant affiliations beyond their academic appointment.