Dark matter: our review suggests it’s time to ditch it in favour of a new theory of gravity 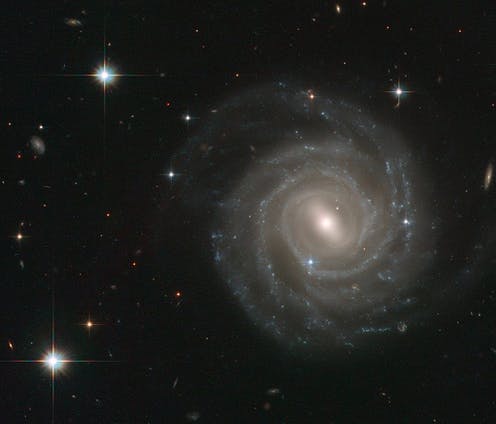 We can model the motions of planets in the Solar System quite accurately using Newton’s laws of physics. But in the early 1970s, scientists noticed that this didn’t work for disc galaxies – stars at their outer edges, far from the gravitational force of all the matter at their centre – were moving much faster than Newton’s theory predicted.

This made physicists propose that an invisible substance called “dark matter” was providing extra gravitational pull, causing the stars to speed up – a theory that’s become hugely popular. However, in a recent review my colleagues and I suggest that observations across a vast range of scales are much better explained in an alternative theory of gravity proposed by Israeli physicist Mordehai Milgrom in 1982 called Milgromian dynamics or Mond – requiring no invisible matter.

Mond’s main postulate is that when gravity becomes very weak, as occurs at the edge of galaxies, it starts behaving differently from Newtonian physics. In this way, it is possible to explain why stars, planets and gas in the outskirts of over 150 galaxies rotate faster than expected based on just their visible mass. But Mond doesn’t merely explain such rotation curves, in many cases, it predicts them.

Philosophers of science have argued that this power of prediction makes Mond superior to the standard cosmological model, which proposes there is more dark matter in the universe than visible matter. This is because, according to this model, galaxies have a highly uncertain amount of dark matter that depends on details of how the galaxy formed – which we don’t always know. This makes it impossible to predict how quickly galaxies should rotate. But such predictions are routinely made with Mond, and so far these have been confirmed.

If observations later reveal a rotation speed of 188km/s, then this is consistent with both theories – but clearly, Mond is preferred. This is a modern version of Occam’s razor – that the simplest solution is preferable to more complex ones, in this case that we should explain observations with as few “free parameters” as possible. Free parameters are constants – certain numbers that we must plug into equations to make them work. But they are not given by the theory itself – there’s no reason they should have any particular value – so we have to measure them observationally. An example is the gravitation constant, G, in Newton’s gravity theory or the amount of dark matter in galaxies within the standard cosmological model.

We introduced a concept known as “theoretical flexibility” to capture the underlying idea of Occam’s razor that a theory with more free parameters is consistent with a wider range of data – making it more complex. In our review, we used this concept when testing the standard cosmological model and Mond against various astronomical observations, such as the rotation of galaxies and the motions within galaxy clusters.

Each time, we gave a theoretical flexibility score between –2 and +2. A score of –2 indicates that a model makes a clear, precise prediction without peeking at the data. Conversely, +2 implies “anything goes” – theorists would have been able to fit almost any plausible observational result (because there are so many free parameters). We also rated how well each model matches the observations, with +2 indicating excellent agreement and –2 reserved for observations that clearly show the theory is wrong. We then subtract the theoretical flexibility score from that for the agreement with observations, since matching the data well is good – but being able to fit anything is bad.

A good theory would make clear predictions which are later confirmed, ideally getting a combined score of +4 in many different tests (+2 -(-2) = +4). A bad theory would get a score between 0 and -4 (-2 -(+2)= -4). Precise predictions would fail in this case – these are unlikely to work with the wrong physics.

It is immediately apparent that no major problems were identified for Mond, which at least plausibly agrees with all the data (notice that the bottom two rows denoting falsifications are blank in figure 2).

The problems with dark matter

One of the most striking failures of the standard cosmological model relates to “galaxy bars” – rod-shaped bright regions made of stars – that spiral galaxies often have in their central regions (see lead image). The bars rotate over time. If galaxies were embedded in massive halos of dark matter, their bars would slow down. However, most, if not all, observed galaxy bars are fast. This falsifies the standard cosmological model with very high confidence.

Another problem is that the original models that suggested galaxies have dark matter halos made a big mistake – they assumed that the dark matter particles provided gravity to the matter around it, but were not affected by the gravitational pull of the normal matter. This simplified the calculations, but it doesn’t reflect reality. When this was taken into account in subsequent simulations it was clear that dark matter halos around galaxies do not reliably explain their properties.

There are many other failures of the standard cosmological model that we investigated in our review, with Mond often able to naturally explain the observations. The reason the standard cosmological model is nevertheless so popular could be down to computational mistakes or limited knowledge about its failures, some of which were discovered quite recently. It could also be due to people’s reluctance to tweak a gravity theory that has been so successful in many other areas of physics.

The huge lead of Mond over the standard cosmological model in our study led us to conclude that Mond is strongly favoured by the available observations. While we do not claim that Mond is perfect, we still think it gets the big picture correct – galaxies really do lack dark matter.

Indranil Banik is paid from a grant awarded by the STFC whose primary objective is to test MOND using wide binary stars in the Solar neighbourhood.

2022-07-07
Previous Post: Ukraine Recap: letter from Kyiv and despatches from the war zone
Next Post: Exercise can reduce stress and improve sleep – particularly for women with breast cancer