The Brazilian, 25, penned a five-year contract with the Gunners this week.

Mikel Arteta and his staff had been pushing to sign him for weeks amid the club’s striker crisis.

And upon Jesus’ arrival he admitted that he was thrilled to complete the deal.

The Arsenal boss said: “I’m very excited. The club has done a tremendous job to recruit a player of this stature.

“I know Gabriel personally very well, and we all know him well from his time in the Premier League and being really successful here. 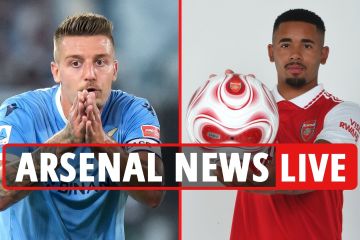 “This is a position that’s been on our radar for a long time now and we have managed to get a player that we all wanted, so I’m really happy.”

Jesus joined his new teammates in training for the first time shortly after Arsenal announced his arrival and it appears he has already settled in well.

The club posted a picture on social media of the striker alongside his Brazil teammates Gabriel Magalhaes and Gabriel Martinelli with the caption: “Gabi x Gabi x Gabby”.

Kieran Tierney was also present in training, much to the relief of Arsenal fans.

The left-back required surgery for a knee injury which he sustained while on international duty with Scotland earlier this year.

Fabio Vieira currently remains out of action with a foot issue.

The Portugal star was pictured wearing a protective boot last week sparking fears that he would not be fit in time for Arsenal’s pre-season tour.

Meanwhile, Matt Turner is yet to begin training following the arrival of his newborn son.

2022-07-04
Previous Post: How news affects people’s expectations and drives economic change
Next Post: Colombia: Gustavo Petro and Francia Márquez have achieved a historic victory for the left – so who are they?