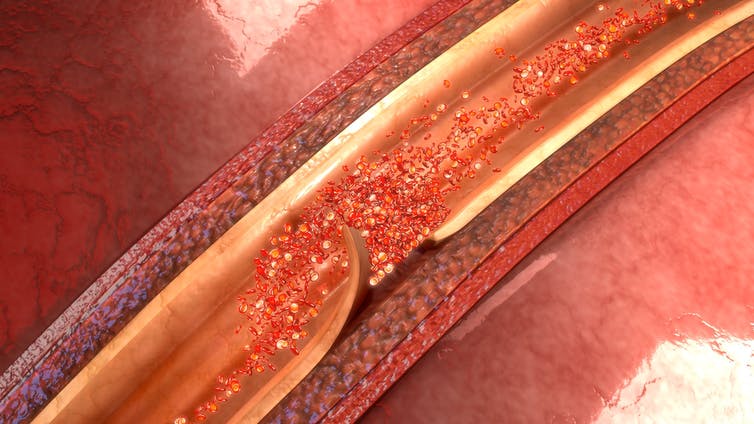 It was revealed this week that Depeche Mode keyboardist Andrew “Fletch” Fletcher, died in May from an aortic dissection. Aortic dissections are relatively uncommon compared to other cardiovascular conditions such as heart attacks – but their outcomes are often very poor.

The aorta is the body’s main artery. It carries oxygen and nutrient rich blood from the heart to the rest of the body, providing our tissues with everything they need to function properly. An aortic dissection is a tear of the innermost lining of the aorta. The inner lining, known as the intima or tunica intima, is a single layer of highly specialised cells called endothelial cells, which ensure that the blood stays in its liquid form as it flows around through the body’s blood vessels.

When damage to the endothelial layer occurs, the high-pressure blood tears through the intima layer and into the next layer, the media – literally “dissecting” a pathway into the outer layers of the aorta. If not diagnosed and treated, this can lead to complete failure of the aorta wall and blood escaping out of the vessel and into neighbouring structures and tissues. This stretches the aorta and changes its biomechanical function, which can further contribute to the disease process. As blood is diverted into the tear, it can remove flow from the organs downstream – in some instances completely preventing supply to some of them. The tear also changes the flow of blood through the vessel, which can cause further damage to the specialised endothelial lining cells.

Aortic dissections are linked primarily to two things: genetic conditions and lifestyle factors that affect the heart and blood vessels. For example, poor diet and smoking may lead to hypertension (high blood pressure) which increases the likelihood of damage to the specialised cells that line the blood vessels. This makes it far more likely for a person to develop an aortic dissection.

A number of genetic conditions are associated with an increased risk of aortic dissection too. The most common of these is a condition called Marfan syndrome, affecting about one in 5000 people. This prevents people from properly producing enough of a key protein which helps give blood vessel walls their structure and elasticity. Without enough of this protein, the blood vessel walls are weakened and at an increased risk of dissection or rupture. People with Marfan syndrome are also more likely to develop an aortic dissection at a younger age – usually around 38.

Symptoms of aortic dissection include pain, described often as ripping or tearing in the chest, abdomen or back. Where people are known to have predisposing conditions, they are monitored or medically managed, usually with drugs such as betablockers and anti-hypertensives, which reduce blood pressure and decrease risk of damage to the endothelial lining. This type of management is only really appropriate for type B dissections. Type A almost always requires immediate surgical intervention.

In people with suspected or known aortic dissection, catching it early is key. A CT scan will typically be used to diagnose the condition. Usually, the end stage of treatment is surgical repair or replacement of the defective part of the aorta. But outcomes from this procedure are mixed, with survival from surgery for a type A dissection usually around 52-94% at one-year after an operation and 45-88% at five years. For type B, there’s a similar variation in survival, at year one (around 56-92%) and year 5 (48%-82%).

In type B dissections, sometimes the anti-hypertensive medications may be used to stabilise the patient before surgery, but this is not always possible. A dissection is a serious condition and will not repair itself.

Due to the seriousness and potentially poor outcomes from aortic dissection, it’s important to modify any lifestyle factors that may contribute to an increased risk – such as exercising, eating a healthy and balanced diet and giving up smoking. It’s also important to ensure any underlying health conditions that may put you at greater risk (such as hypertension) are medically managed.

2022-07-03
Previous Post: How reindeer eyes transform in winter to give them twilight vision
Next Post: Lecturer in Language Education (Education and Scholarship)