Royal Academy Summer Exhibition 2022: The end is nigh, so why not buy art? 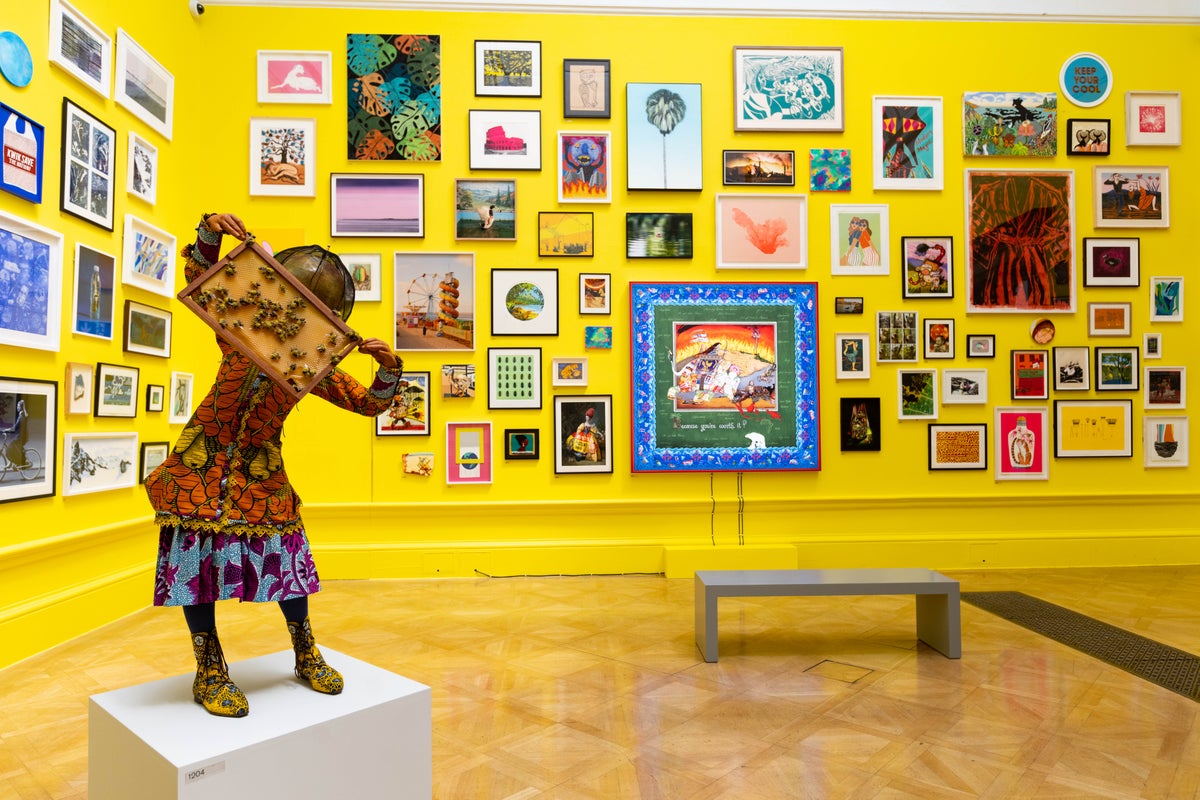 limate apocalypse is nearly upon us. Practically everyone in the Royal Academy Summer Exhibition says so. I’ve never seen such consensus at this famously competitive show.

With a whopping 1,462 works this year’s edition, restored to its traditional summer slot at last, is even bigger than usual by a couple of hundred items and yet, for a change, it feels like less of a clutter. Gone, mostly, are the stuffed salon hangs where minor Royal Academicians are relegated to hugging the ceiling. Great swathes of upper wall space in several of the galleries have been left clear. It’s deceptive of course – there’s still way too much to look at – but at least you don’t come out with your head spinning.

Inevitably, ‘Climate’ is the theme. Whereas last year’s exhibition, coordinated by Yinka Shonibare, was a post(ish)-Covid celebration of ‘Reclaiming Magic’, Turner Prize nominated sculptor Alison Wilding’s 2022 offering is very much a warning, and that tub is being comprehensively thumped like never before, though it’s considerably less depressing than that sounds.

I mean, sure, the world is basically on fire, whether that’s in Anselm Kiefer’s curiously understated disaster watercolour Fugit Amor or Douglas White’s Black Palm, a tree made of blown-out tyres. The vastly improved architecture section, curated by Niall McLaughlin and Rana Begum, which contrasts artworks and architectural models to the benefit of both, centres around an elevated shelter made of bamboo and metal by Marina Tabassum, intended for flood refugees; elsewhere John Gerrard’s pointed film work Western Flag (Spindletop, Texas) shows a flagpole continuously emitting a broadly rectangular fug of oily black smoke.

Sometimes nature gets the upper hand, as in Patrick Harrison’s Living Room, or Gina Soden’s Albero in Fabbrica, both of which show flora of various kinds flourishing in derelict sites abandoned by humanity.

Even the cheerful jumble of the print rooms, curated by Grayson Perry on acid yellow walls (which actually serves the chosen work rather well) evokes the environmental end of days: “Oh Fluffy,” a small girl asks a puppy in Magda Archer’s Oh Fluffy 2, “why are they screwing up my planet?”, while the Singh Twins throw everything at Because You’re Worth It? II: Death rides a collapsing elephant made of brand logos and brandishes a crossbow at a group of dying orangutans, and again everything is on fire. There might be a polar bear (there are several elsewhere; they are very disappointed in us).

Even the usual endless flowers and trees submitted by the more traditional Academicians suddenly look less incongruous now that they have the excuse of representing nature at risk.

Other matters do get a look in. There’s a small, wistful portrait of Volodymr Zelensky by Gillian Wearing in room III, and in the Lecture Room, Perry pays tribute to the victims and survivors of the coronavirus with Covid Bell, a cast bronze bell decorated with masked doctors, coffins and corpses. During opening hours, some visitors will be invited to ring it.

What there isn’t, at any point, is a real wow moment, unless you count the yellow walls. I never thought I’d say this, but this serene new Summer Exhibition feels almost too polished. The sheer scale of it does remain somewhat overwhelming – a measure of which is that I somehow failed to notice that a pretty embroidered landscape by the artist Jess de Wahls (the subject herself of a row last year, when the RA shop stopped stocking her stitched flowers over a blog she had written two years previously outlining views deemed by some to be transphobic – the gallery later apologised) evoked environmental disaster, until it was pointed out to me later by the artist herself on Twitter (perfectly reasonably: the corpses in particular are a dead giveaway). After a while you can’t see the wood for the trees, and there are a lot of trees.

But even the boring-slash-bordeline-awful stuff that you always get in this necessarily variable show is so tastefully arranged that you barely notice. Which takes a bit of the fun out of it, if I’m honest. This is a beautifully curated exhibition, no question but – whisper it – could it be that we’ll miss the mismatched mess now it’s gone?

Royal Academy, from June 21 to August 21; royalacademy.org.uk. This article has been amended

2022-06-18
Previous Post: Transfer news LIVE – all the latest from around the market
Next Post: Children as young as 6 months eligible for Covid shots in U.S., vaccinations to begin Tuesday