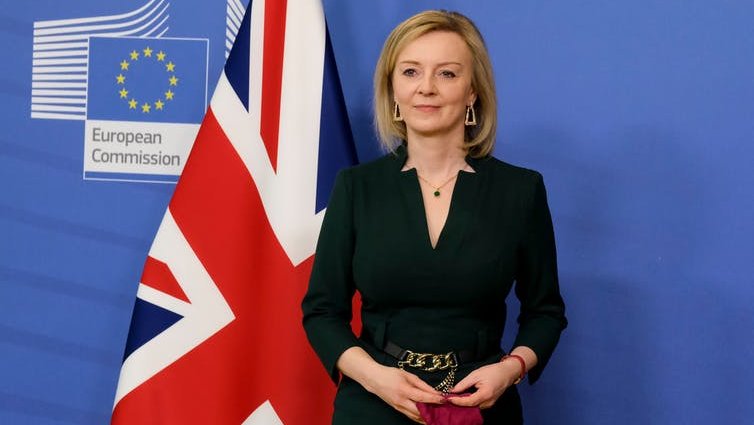 At present, the protocol ensures there is no hard border on the island of Ireland, by keeping Northern Ireland within the EU’s single market for goods. But critics of the protocol see these checks on the Irish Sea border as undermining the integrity of the internal British market, and some within the unionist community see these checks as a threat to their British identity.

The bill overrides large parts of the EU-UK withdrawal agreement, an international treaty. It disapplies most of the EU law provisions under the protocol which regulate the movement of goods. It also cuts out the Court of Justice of the European Union in resolving trade disputes related to the protocol.

The question is now whether the UK can justify this move in the eyes of the law.

If passed by parliament, the bill would override core obligations under the protocol. This is not an attempt to work within the parameters of the protocol – rather, the legislation seeks to undo the agreement’s very essence.

A decision to use domestic legislation to breach the Brexit withdrawal agreement goes against the pacta sunt servanda rule – a fundamental principle of international law articulated in the the Vienna convention on the law of treaties. This provides that every treaty in force is legally binding, and parties to treaties must comply with them in good faith.

By merely publishing its intention to unilaterally override the protocol, the UK is already in breach of international law, specifically the good faith requirement under Article 5 of the withdrawal agreement.

Can the wrongful act be justified?

The government has insisted that the bill does not breach international law, saying that it was a “necessity” to safeguard the UK’s interests, namely “stable social and political conditions in Northern Ireland, the protection of the Good Friday Agreement […] and fostering of social and economic ties” between Great Britain and Northern Ireland.

But a necessity defence can only be invoked under certain specific conditions. These conditions, which are codified in the International Law Commission’s draft articles on state responsibility, are legally binding under customary international law.

First, a state must show that the action is the only means to safeguard an essential interest against grave and imminent peril. Second, they must show that the action does not seriously impair the essential interests of the involved states. The threshold to pass these tests is very high. Proving them would be no easy task given that businesses in Northern Ireland largely support the protocol – as do the political parties who got the most support in recent assembly elections.

Importantly, if there are other, lawful alternatives – even if more costly or politically inconvenient – the “necessity” claim cannot be justified. One alternative would be invoking Article 16 of the protocol – the “safeguards” clause. This allows parties to derogate from protocol obligations if it can show that its application has led “to serious economic, societal or environmental difficulties that are liable to persist, or to diversion of trade”. But this comes with its own set of challenges.

Most significantly, invoking Article 16 requires any safeguard measure be limited in scope and duration to “what is strictly necessary” to solve the problem. It would be extremely difficult to argue that a piece of legislation undoing most of the protocol is restricted to what is “strictly necessary”.


Overriding the protocol is certainly not the only way to avoid checks at the Irish Sea border. The UK could have chosen to align its customs and regulatory regime to that of the EU. This was supported by politicians and businesses in Northern Ireland.

Instead, the government has prioritised its choice to leave the EU single market and customs union over the need to ensure compliance in international obligations and the desire to avoid checks on British goods entering Northern Ireland. In this sense, the use of the bill to carry out wholesale breaches of the withdrawal agreement is more a matter of political convenience than necessity.

How things could play out

If the bill passes, there are likely to be legal challenges from the EU, as well as from individuals and businesses whose rights may be affected. The EU may also act sooner by relaunching the legal challenges it suspended last year in relation to the UK’s decision to unilaterally extend grace periods under the protocol. There are reports that it will launch new legal action in other areas. The EU could also immediately initiate proceedings against the UK, arguing that the publication of the bill itself is a breach of the good faith requirement under the withdrawal agreement.

Cynics might argue that the UK government’s true aim is to threaten non-compliance with the protocol to gain leverage in its negotiations with the EU. The government hints as much in its legal position, stating that it remains hopeful of negotiating an alternative solution.

This approach seriously undermines the UK’s standing as a credible and trustworthy international actor. Building a reputation as a country that sees compliance with international law as optional will cause untold damage to the UK’s reputation. If the government is willing to disregard the protocol almost in its entirety on the basis of flimsy and contrived legal arguments, why should the EU trust it to uphold its obligations in any future agreement?

2022-06-15
Previous Post: Grenfell Tower anniversary: how a quilt in the making is a symbol of the community’s love and quest for justice
Next Post: Dylan Moran at the Eventim Apollo: a bit meandering, but when he’s good, he’s very very good