Grenfell Tower: the difficult task of creating a fitting memorial to the tragedy 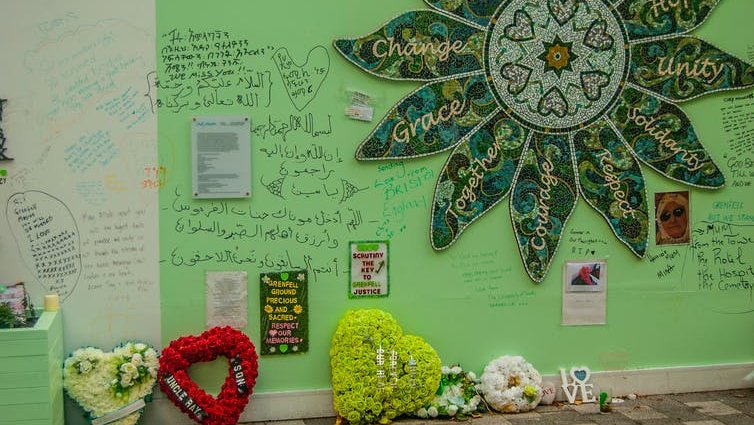 In the days and weeks after the 2017 Grenfell Tower tragedy, in which 72 people lost their lives in a fire that consumed the 24-storey residential block in North Kensington, London, dozens of memorials appeared in the vicinity of the building. People brought flowers and pictures and green ribbons. They made hearts and mosaics. They painted graffiti. They went on silent walks.

Five years on, many of these spontaneous creations are still there. They speak powerfully to the pain and loss in the community. But through lack of maintenance and ownership, or simply because they were not designed to withstand the elements and the passing of time, they are already showing signs of decay. The risk of their disappearing entirely comes with the fear that the memory of what happened will be lost too.

This is why, in 2019, the Grenfell Tower memorial commission was created. The purpose was to formalise how the site would be remembered and to ensure the community is heard.

In May 2022, the commission published an interim report entitled Remembering Grenfell: Our Journey So Far. It relays the breadth of ideas and concerns expressed to date, over what form this memorial should take.

Research shows that collectively remembering a difficult past in this way – via a structure or object intended to endure – is not an easy task. For a memorial to serve its purpose, it needs to be peaceful and reflective. It needs to promote remembrance, hope and community. Respect is fundamental.

How to create a fitting memorial

The Grenfell Tower memorial commission represents three main communities: bereaved family members; survivors of the fire; and residents of the Lancaster West Estate, in which the tower stands. With the help of public engagement company Kaizen, it has sought to reach as many people as possible – via recorded conversations, online community meetings and weekend drop-in sessions – and will continue to do so until January 2023.

A design brief will then be developed in order to open a public competition between April 2023 and April 2024. The plan is to start building the memorial by December 2024.

So far, as the report relays, about 20% of bereaved individuals, 6.2% former residents of Grenfell tower and Grenfell Walk (who have now been fully relocated to new homes) and 28% of the residents of the wider Lancaster housing estate, have already shared their views. This is a good starting point.

With over 2,000 participants, recognising the views of all those affected, and co-designing something that encompasses all those views, is a challenge. As the report’s authors put it, “part of the way forward might be to accept that we cannot make all the pain go away or make it better.”

Many bereaved family members are still grieving and are simply not ready to engage in the memorial design. The commission is nonetheless adamant to “never make a decision by numbers, without thinking through whether it meets the needs of bereaved families as well as others.” The silence of these community members should also be part of the remembrance process.

The site of the memorial will become a sacred space, a place where the remains of the victims that were not identified will be put to rest and a place where those who were can be honoured by their families.

The report speaks to people’s hopes that the memorial will materialise the pain of families and also their collective determination that this never happen again. “Justice,” the authors write, “is incredibly important to the Grenfell community.”

Ultimately, the aim is is that the site become a beacon to ensure the nation does not forget this shameful episode. And that it never be used as housing again.

The shapes the memorial could take

In keeping with other memorial projects around the world, the participants have highlighted several key notions that should underpin the design: peaceful and reflective; respect and remembrance; hope and positivity; community and love. The report shows how these ideas are being kept front and centre:

Perhaps through art, our disappointment, anger, fear, guilt and sorrow could find a place of respect at the heart of the memorial, rather than being silenced or pushed to the side.

Three options for the structure itself are being explored: a garden (potentially with a water feature and a children’s play area); an artwork or monument; or a building.

The National Memorial Arboretum, in Staffordshire, which is the UK’s centre of remembrance for fallen servicepeople, shows how gardens can provide the quiet people need for reflection. Being in nature – to experience the seasons and the passing of time – also brings a sense of hope and positive thoughts about the future. Research also shows that landscapes designed to be therapeutic may help with the grieving process.

Artworks and monuments have been shown to be effective memorials, too, particularly when they include information about those who lost their lives. To memorialise those who died during Argentina’s military dictatorship (1976-1983), the Park of Memory was created in 2004 and comprises a garden and memorials, with the names of all the disappeared inscribed on long walls.

The Grenfell commission’s report highlights that there is no consensus yet about how much information could be used in the memorial, be it in the form of pictures or personal stories.

Few people were in favour of a building, potentially a museum, since this could bring tourists to the area and adversely impact the peacefulness of the memorial. But as my research shows, combining the authenticity of a historic site with the pedagogical aspect of memory can work. The Otto Weidt Museum in Berlin combines the factory in which Weidt, a pacifist factory owner, tried to help Jewish workers escape from the Gestapo, with a documentation centre located next door.

Some people have suggested a separate exhibition on the Grenfell disaster, to be held at the Museum of London. Separating out the spaces for reflection and for education is a common solution, as has been done Buenos Aires. The main memorial museum is located not in the Park of Memory but in the former ESMA building, the Argentine army mechanics school and clandestine torture centre.

The Grenfell Tower memorial commission has no bearing on the future of the tower itself – on whether it is kept or demolished – as this is the government’s responsibility.

The tower is a constant reminder of the tragedy. For many it causes a huge strain on their mental health. Bereaved families, former and current residents in the area may need more time. Some may never be ready to talk about how to memorialise this tragedy.

A distinct memorial, whichever form it takes, will be a place for all, to remember and to fight for justice, devised in a truly grassroots manner. I encourage you to read the commission’s report in full. The challenge it has taken on is as sad and difficult as it is laudable. And its members are in it for the long haul.

Ana Souto does not work for, consult, own shares in or receive funding from any company or organization that would benefit from this article, and has disclosed no relevant affiliations beyond their academic appointment.

2022-06-13
Previous Post: Burned-out heroes: why bedside nurses should not have to be martyrs to be valued
Next Post: New USB-C charger rule shows how EU regulators make decisions for the world