Dark matter: should we be so sure it exists? Here’s how philosophy can help 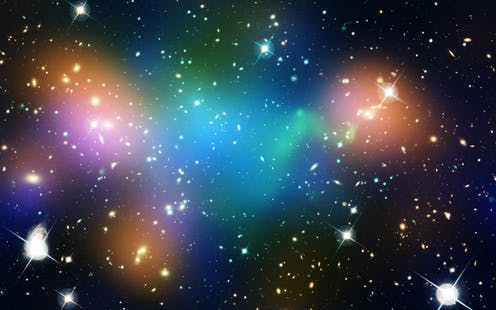 It has been more than 50 years since astronomers first proposed “dark matter”, which is thought to be the most common form of matter in the universe. Despite this, we have no idea what it is – nobody has directly seen it or produced it in the lab.

So how can scientists be so sure it exists? Should they be? It turns out philosophy can help us answer these questions.

Back in the 1970s, a seminal study by astronomers Vera Rubin and Kent Ford of how our neighbour galaxy Andromeda rotates revealed a surprising inconsistency between theory and observation. According to our best gravitational theory for these scales – Newton’s laws – stars and gas in a galaxy should rotate slower and slower the further away they are from the galaxy’s centre. That’s because most of the stars will be near the centre, creating a strong gravitational force there.

Rubin and Ford’s result showed that this wasn’t the case. Stars on the outer edge of the galaxy moved about as fast as the stars around its centre. The idea that the galaxy must be embedded in a large halo of dark matter was basically proposed to explain this anomaly (though others had suggested it previously). This invisible mass interacts with the outer stars through gravity to boost their velocities.

This is only one example of several anomalies in cosmological observations. However, most of these can be equally explained by tweaking the current gravitational laws of Newtonian dynamics and Einstein’s theory of general relativity. Perhaps nature behaves slightly differently on certain scales than these theories predict?

One of the first such theories, developed by Israeli physicist Mordehai Milgrom in 1983, suggested that Newtonian laws may work slightly differently when there’s extremely small acceleration involved, such as at the edge of galaxies. This tweak was perfectly compatible with the observed galactic rotation. Nevertheless, physicists today overwhelmingly favour the dark matter hypothesis incorporated in the so-called ΛCDM model (Lambda Cold Dark Matter).

This view is so strongly entrenched in physics that is widely referred to as the “standard model of cosmology”. However, if the two competing theories of dark matter and modified gravity can equally explain galactic rotation and other anomalies, one might wonder whether we have good reasons to prefer one over another.

Why does the scientific community have a strong preference for the dark mater explanation over modified gravity? And how can we ever decide which of the two explanations is the correct one?

Philosophy to the rescue

In the case of the strange rotation in galaxies, the data alone cannot determine whether the observed velocities are due to the presence of additional unobservable matter or due to the fact that our current gravitational laws are incorrect.

Scientists therefore look for additional data in other contexts that will eventually settle the question. One such example in favour of dark matter comes from the observations of how matter is distributed in the Bullet cluster of galaxies, which is made up of two colliding galaxies about 3.8 billion light years from Earth. Another is based on measurements of how light is deflected by (invisible) matter in the cosmic microwave background, the light left over from the big bang. These are often seen as indisputable evidence in favour of dark matter because due Milgrom’s initial theory can’t explain them.

However, following the publication of these results, further theories of modified gravity have been developed during the last decades in order to account for all the observational evidence for dark matter, sometimes with great success. Yet, the dark matter hypothesis still remains the favourite explanation of physicists. Why?

One way to understand it is to employ the philosophical tools of Bayesian confirmation theory. This is a probabilistic framework for estimating the degree to which hypotheses are supported by the available evidence in various contexts.

In the case of two competing hypotheses, what determines the final probability of each hypothesis is the product of the ratio between the initial probabilities of the two hypotheses (before evidence) and the ratio of the probabilities that the evidence appears in each case (called the likelihood ratio).

If we accept that the most sophisticated versions of modified gravity and dark matter theory are equally supported by the evidence, then the likelihood ratio is equal to one. That means the final decision depends on the initial probabilities of these two hypotheses.

Determining what exactly counts as the “initial probability” of a hypothesis, and the possible ways in which such probabilities can be determined, remains one of the most difficult challenges in Bayesian confirmation theory. And it is here where philosophical analysis turns out to be useful.

At the heart of the philosophical literature on this topic lies the question of whether the initial probabilities of scientific hypotheses should be objectively determined based solely on probabilistic laws and rational constraints. Alternatively, they could involve a number of additional factors, such as psychological considerations (whether scientists are favouring a particular hypothesis based on interest or for sociological or political reasons), background knowledge, the success of a scientific theory in other domains, and so on.

Identifying these factors will ultimately help us understand the reasons why dark matter theory is overwhelmingly favoured by the physics community.

We still don’t know the exact answers to these questions, but we are working on it. More research in philosophy of science will give us a better verdict.

2022-06-09
Previous Post: Lecturer in Law (Education & Scholarship) (Community Law Clinic) at University of Exeter
Next Post: Corsets and waist trainers: how celebrities and influencers have driven our modern obsession with shapewear