The Tinderbox: why I disagree with the view of history in this documentary on the Israel-Palestine conflict 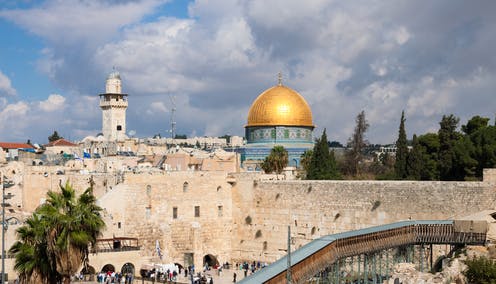 When filmmaker Gillian Moseley, a Jewish Anglo-American, decided to make a documentary examining the question of belonging and home in the Holy Land – the coastal strip that stretches from Syria to Egypt, with Israel in the centre – she believed she understood the roots of the current Israeli-Palestinian conflict.

Like many, she thought the conflict began when the state of Israel came into existence in 1948 following the United Nations’ decision to partition the land to give Jews a homeland following the horrors of the Holocaust.

Moseley’s film, The Tinderbox, combines personal interviews with historical evidence and jumps between events from the past to the present in its search for an answer. Moseley interviewed people on both sides, asking how and why the conflict started and how it affects the lives of people today.

Critically, Moseley learned that the roots of the conflict actually took hold long before 1948. She attributes this lack of knowledge to her education and what she had been told by her family as she grew up.

Her conclusion is that the catalyst for the conflict was Britain and the promises it made as part of a power play during and after the first world war, when, desperate for allies, it committed to Arab independence. But how does this explanation stack up historically?

History of a troubled land

Before 1948, the land between Lebanon in the north and Egypt in the south was known as Palestine. The area was predominantly Arab and had been ruled by numerous entities over the centuries, the last of which were the British, who assumed control over the area following the fall of the Ottoman Empire in 1917.

During the first world war, the British favoured the Arab population, seeking support in their campaign against German expansion in the Middle East. But towards the end of the war, they switched their favour towards the Jewish population. The Balfour Declaration of November 1917 promised them a home in that same land.

In 1920 the San Remo Conference awarded the British a mandate to control Palestine both internationally and on behalf of the inhabitants. But tensions grew, leading both Arabs and Jews to turn against the British.

They, in turn, decided the mandate was too costly and turned to the US and the UN for a solution. UN General Assembly resolution 181 divided Palestine into Jewish and Palestinian areas. The Jewish representatives accepted the decision and, on May 14, 1948, declared a state on their portion of the land.

The Arabs refused to accept this, and war broke out when the armies of Egypt, Lebanon, Syria, Iraq, Transjordan and Saudi Arabia joined local Palestinian forces in attacking the nascent state. In February 1949, formal armistice lines, known as “the green line” were agreed between Israel and its neighbours, with Israel gaining more territory than was originally granted to it by the UN partition plan.

Ever since, Israel has continued to expand its hold over the land, to the detriment of Palestinians. Some areas such as the Sinai peninsula, Gaza, parts of East Jerusalem and the Golan Heights were won over by Israel in the numerous wars since independence.

East Jerusalem and the West Bank remain the main areas of dispute. The international community and Palestinians argue that these are occupied territories and Israel builds settlements illegally there. Israel claims that the specific territory was not under any sovereign power before 1967 and therefore it is disputed territory rather than occupied land. It is agreed that the final status of the land would be determined by direct negotiation between the parties.

If you are interested in the history of the Middle East, in the Israel-Palestine conflict, or in the impact of colonialism on current world politics, The Tinderbox attempts to provide a balanced review of this history and covers key moments in the region without determining who was right or wrong.

Moseley offers a fresh look at several key issues pertinent to the conflict: the problems of misinformation, disinformation and growing extremism within the two communities that can be partly attributed to the “enforced separation that fuels mistrust and fear”, as Mosley rightly observes. The film ends on an optimistic note while stressing the necessity of dialogue and empathy towards the other.

Should you watch The Tinderbox? Absolutely. But also keep in mind it is a deeply personal quest for answers by a Jewish woman who does not live in Israel. As an academic who has studied the Israeli-Palestinian conflict and its origins, in my view the film makes some mistakes with the way it recounts history.

While I agree that British imperialism played a significant role in the history of the region, there are many other reasons for the situation today. Using the language of blame – especially towards a third party – is unhelpful in transforming any conflict’s dynamics as it shifts focus away from how the disputing sides can take responsibility for their own contributions.

There are times in The Tinderbox when I believe the facts are seen in such a way as to fit a specific narrative. For example, the map below, displayed in the film to show the distribution of the populations over the years, is inaccurate. It attributes Israel more land than it holds in reality and does not reflect the rule the Palestinian Authority has over specific areas.

The film also appears to overlook several facts, such as the UN decision to give Israel state status at the same time the Palestinians were offered a state, too. The Palestinians refused the resolution, claiming it was unjust given their hold over the land, their history in the area and their proportion of the population.

The film brushes over the long history of the two communities prior to the arrival of the British. Though they may have been far fewer in numbers, not all Jews left the region in Roman or Babylonian times as the film suggests.

Some Jewish communities have continuously existed there – peacefully or not – throughout history. Clashes between the communities, including massacres and campaigns of violence, happened long before the British ever set foot in the area.

The documentary also fails to give Arab Israelis due attention – the communities of Arabs (whether Muslim, Christian or other) who comprise almost 20% of the Israeli population. This further skews the narrative offered, and is unhelpful for the promotion of a meaningful dialogue between the communities over the future of the land.

The Tinderbox is an interesting watch, but one that does not dig deep enough into the relevant and timely questions of the conflict, or help us imagine a better future of shared existence and peace.

Ronit Berger Hobson does not work for, consult, own shares in or receive funding from any company or organisation that would benefit from this article, and has disclosed no relevant affiliations beyond their academic appointment.

2022-05-27
Previous Post: Everything You Need to Know About Monkeypox
Next Post: Is it wrong to steal from large corporations? A philosopher debates the ethics