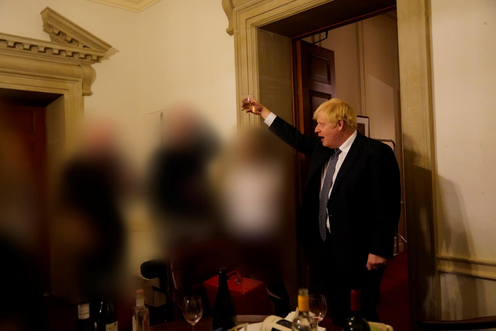 What is the difference between taking responsibility and bearing responsibility? The former is what the prime minister, Boris Johnson, keeps telling us he is doing. But the latter is what Sue Gray says senior figures at the heart of government should do.

“The senior leadership at the centre, both political and official, must bear responsibility for this culture,” wrote the civil servant in her report on rule-breaking parties at Downing Street during the pandemic.

As I’ve written about in my work on leadership, if you bear responsibility you carry a mark. People can see that you are responsible. This is not what the prime minister is doing. He takes responsibility and then immediately reneges on it.

We perhaps shouldn’t be surprised by this behaviour. It’s precisely what he did when he was a journalist, lobbing fictitious accounts of life in Brussels back to his editors at the Daily Telegraph. As he himself admitted to the documentary maker Michael Cockerell:

I found was sort of chucking these rocks over the garden wall and I listened to this amazing crash from the greenhouse next door over in England as everything I wrote from Brussels was having this amazing, explosive effect on the Tory party, and it really gave me this I suppose rather weird sense of power.

Jim Collins, the leadership guru and author of classic management texts such as Built to Last and How the Mighty Fall, says that we should ask of any aspiring leader: “What are you in it for?”

In Johnson’s case, there often appears to be no purpose to his premiership other than for him to continue in office. Many would be hard pressed to identify any clear moral or even political direction.

Johnson talks about leadership but arguably displays almost zero understanding of it or ability to offer it. Perhaps after receiving legal advice ahead of the police investigation, Johnson has claimed that it was his duty as a leader to show up at leaving parties and raise a glass to mark colleagues’ departures.

This explanation of his presence at events that broke lockdown rules may have been enough to satisfy the Metropolitan Police. But his real duty as a leader is and was to set an example and not to tolerate rule-breaking, of which he must have been aware but now claims not to have been.

His duty is also to show that Number 10’s standards must be cleaned up, and that, as the head of the government, he recognises that he can no longer function as prime minister. His duty, as a leader, should be to resign.

Is this just over-excited Westminster tittle-tattle which has limited significance for people facing a cost of living crisis in the real world? Should we just calm down and, as we are being urged to, “move on”? I fear not. Another duty of political leadership is to avoid moral contagion and the degradation of public life. With every day he continues in office Johnson damages the reputation of that office.

In parliament the backbench Conservative MP Tobias Ellwood asked if his colleagues could carry on defending Johnson’s behaviour. The chief secretary to the Treasury, Simon Clarke, replied “yes”, and exchanged smiles with his fellow cabinet minster, Jacob Rees-Mogg. This is what moral contagion looks like. This is how great businesses and organsations fall: when an over-mighty leader infects those around him – it is usually a him – demanding unquestioning loyalty and complicity in immoral acts.

This is the slippage, the moral relativism, when otherwise decent people end up corrupted by attempting to justify the unjustifiable. It is often accompanied by a kind of delusional humour, when those who are trapped in a decaying system try to keep their spirits up with smiles and jokes.

Remember Johnson’s first post-election cabinet meeting, when grown adults were required to repeat election slogans – “get Brexit done!”, “40 new hospitals!” – for the TV cameras. Ministers laughed, pretending to be in on the joke. But there was nothing funny about the spectacle.

It matters how a prime minister behaves, for democracy, for standards in public life, for our own general wellbeing. The leader of a nation sets an example and sets the tone. But leadership to Johnson too often means “getting away with it” until the next day’s newspapers arrive, when the cycle of deceit, deflection and denial starts up again. It is a pitiful and damaging spectacle which does us all harm. Johnson doesn’t seem to care or appreciate why he should care. But, as a leader, he should.

This article has been amended to clarify the author’s expertise.

Stefan Stern does not work for, consult, own shares in or receive funding from any company or organisation that would benefit from this article, and has disclosed no relevant affiliations beyond their academic appointment.