Partygate: how the Sue Gray report revealed the age of ‘government by WhatsApp’ 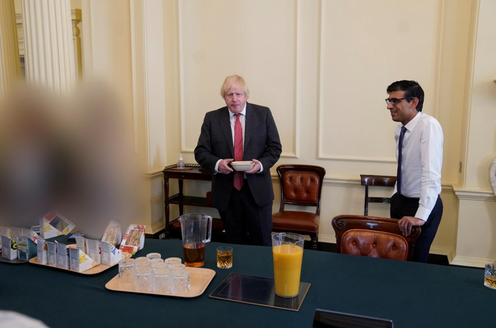 One of the striking things about civil servant Sue Gray’s report on lockdown parties at 10 Downing Street – aside from the alcohol consumption, vomiting and karaoke singing – was the presence of multiple WhatsApp transcripts.

Exchanges between staff showed them planning parties and openly admitting that they knew what they were doing wasn’t right. In one exchange that will surely become emblematic of the whole debacle, Martin Reynolds, a close aide to prime minister Boris Johnson at the time, speaks of having “got away” with a party during lockdown without the press catching wind of it.

Another message from a different member of staff is equally damning:

Drinks this eve is a lovely idea so I’ve shared with the E & V team who are in the office. Just to flag that the press conference will probably be finishing around that time, so helpful if people can be mindful of that as speakers and cameras are leaving, not walking around waving bottles of wine etc.

Inquiries into wrongdoing by government have long made extensive use of official records – but traditionally they were paper-based. Histories written years later have then made use of the “weeded” files in the National Archives to reconstruct those same events. These are often littered with redactions masking sensitive material.

Gray’s report turns this practice on it head. Private messages between those at the heart of Number 10 became the basis of her evidence. These messages showed an unvarnished take on what was said within Number 10, rather than the sanitised script of an official minute. And these messages are potentially more useful to us in understanding the dynamics between those who govern our lives – as well as how they make decisions about official matters.

If important conversations are happening over rapid messaging and group chats – as the Gray report suggests – then that places an additional importance on being able to capture and record them. And let’s be clear, we now understand that party planning, in the context of partygate, is indeed a very serious matter. It’s also clear that WhatsApp is being used for other business in government too.

The prime minister’s former adviser, Dominic Cummings, produced a flurry of WhatsApp messages after his departure from government that demonstrated the fluid dynamics of the official response to Covid that was played out on this app.

Other ministers and backbenchers have provided a steady stream of WhatsApp message screengrabs that show flavours of behind-the-scenes debates, and the importance of being in one group over another. The culture secretary, Nadine Dorries, was said to have been ejected from the European Research Group’s WhatsApp group for having defended the prime minister too readily. WhatsApp messaging has replaced tea-room gossip as the common language of Westminster life.

Where is the transparency?

Digital archive trails (although many of the partygate protagonists did not realise this was what they were creating) have been with us since the inquiries into the Iraq War. At a seminar held at defence thinktank RUSI after the publication of the Butler Inquiry in 2004, a defence intelligence official said he routinely printed off all his email traffic “for the next inquiry”.

I suspect he was a rare case that understood before many others that email traffic would replace official memos as the currency of judicial and parliamentary investigations. Would the officials involved in partygate have been so free and easy with their words had they considered their texts as official memoranda? It seems unlikely.

A huge part of the problem with WhatsApp being used for important business is how easy it is to delete your records, and how the end-to-end encryption that means only the sending and receiving accounts can access the messages is used to avoid scrutiny. In the High Court in March 2022, privacy campaigners accused the government of “governing via WhatsApp” and complained that democratic accountability was being undermined by the practice.

They said decisions were being made via personal WhatsApp message strings, some of which auto-deleted after only seven days. The Institute for Government has subsequently recommended that WhatsApp should not be used to make detailed decisions in government. Where it is used, messages should be retained “for the long term”.

The rules around the use of WhatsApp in government are not particularly vague – the presumption is against its use. What are vague are the rules around ensuring messages are appropriately captured for official records and stored.

One of the lessons of partygate is that an unequal system is emerging from this grey area. Relatively junior people have seen there messages being made public. In other cases, more senior people have escaped full scrutiny merely by virtue of remembering to clear their messaging history – or at least claiming that their messages magically disappeared.

On the other hand, it’s easy to take a screenshot and leak an exchange to the media. Officials have become trapped by the need to use these informal networks to get on and even get ahead, but run the risk of their real, unfiltered selves being exposed to the public. This was very rarely the case prior to the advent of WhatsApp, when emails and memos were clearly marked with a security classification to remind the sender of the discoverability of the message.

The transition to a digital era of government is illuminated by Sue Gray’s report. The culture of politics exists in closed message groups and the business of government is increasingly conducted via these channels. If there is to continue to be meaningful oversight over government these messages will need to be archived and be discoverable to future investigators. This also means that officials will need to return to writing messages with sober caution and with an eye on how their future discovery with be treated by the public.

Robert M. Dover does not work for, consult, own shares in or receive funding from any company or organization that would benefit from this article, and has disclosed no relevant affiliations beyond their academic appointment.