Monkeypox Q&A: how do you catch it and what are the risks? An expert explains 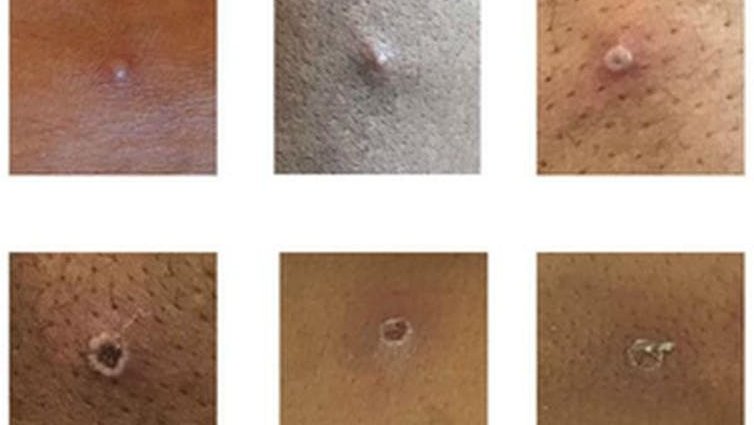 The latest outbreak of monkeypox has, at the time of writing, reached 17 countries with 110 confirmed cases and a further 205 suspected cases. It’s a fast-moving story, so if you need to catch up on the latest, here are answers to some of the most pressing questions.

How is monkeypox spreading?

The first patient in the current outbreak had returned to the UK from travels to Nigeria where monkeypox is endemic. However, cases are now spreading among people who have not travelled to west or central Africa, suggesting local transmission is occurring.

Monkeypox usually spreads by close contact and respiratory droplets. However, sexual transmission (via semen and/or vaginal fluid) has been posited as an additional possible route. The World Health Organization (WHO) says: “Studies are needed to better understand this risk.”

Most cases in the current outbreak have been in youngish men, but the virus can spread to anyone.

What are the symptoms?

Early symptoms are flu-like, such as a fever, headaches, aching muscles and swollen lymph nodes.

Once the fever breaks, a rash can develop, often beginning on the face and then spreading to other parts of the body – most commonly the palms of the hands and soles of the feet.

How deadly is monkeypox?

Monkeypox is mostly a mild, self-limiting disease lasting two-to-three weeks. However, in some cases, it can cause death. According to the WHO, the fatality rate “in recent times” has been around 3% to 6%. The west African monkeypox virus is considered to be milder than the central African one.

Monkeypox tends to cause more serious disease in people who are immunocompromised – such as those undergoing chemotherapy – and children. There have been no deaths from monkeypox in the current worldwide outbreak, but, according to the Daily Telegraph, one child in the UK is in intensive care with the disease.

Why is it called monkeypox?

Monkeypox was first identified in laboratory monkeys (macaques) in Denmark in 1958, hence the name. However, monkeys don’t seem to be the natural hosts of the virus. It is more commonly found in rats, mice and squirrels. The first case in humans was seen in the 1970s in the Democratic Republic of the Congo.

Is monkeypox related to smallpox and chickenpox?

Monkeypox is related to smallpox – they are both orthopoxviruses – but it is not related to chickenpox. Despite the name, chickenpox is a herpes virus, not a poxvirus. (How “chicken” got in the name is not entirely clear. In his dictionary of 1755, Samuel Johnson surmised that it is so named because it is “of no very great danger”.) Nevertheless, the vesicles (little pus-filled blisters) caused by monkeypox are similar in appearance to those of chickenpox.

Are cases likely to continue rising?

Cases are likely to continue to rise significantly over the next two-to-three weeks, but this is not another pandemic in the making. Monkeypox doesn’t spread anywhere near as easily as the airborne virus SARS-CoV-2 that causes COVID-19.

Has monkeypox evolved to be more virulent?

The first genome sequence of the current outbreak (from a patient in Portugal) suggests that the virus is very similar to the monkeypox strain that was circulating in 2018 and 2019 in the UK, Singapore and Israel. So it is unlikely that the current outbreak is the result of a mutated virus that is better at spreading.

How is monkeypox diagnosed?

In the UK, swab samples taken from the patient are sent to a specialist laboratory that handles rare pathogens, where a PCR test is run to confirm monkeypox. The UK Health Security Agency has only one rare and imported pathogens laboratory.

Is there a vaccine for it?

Vaccines for smallpox, which contain the lab-made vaccinia virus, can protect against monkeypox. However, the vaccine that was used to eradicate smallpox can have severe side-effects, killing around one in a million people vaccinated.

The only vaccine specifically approved for monkeypox, Imvanex, is made by a company called Bavarian Nordic. It uses a nonreplicating form of vaccinia, which causes fewer side-effects. It was approved by the US Food and Drug Administration and the European Medicines Agency in 2019 – but only for use in people 18 years of age or older.

Read more:
Monkeypox isn’t like HIV, but gay and bisexual men are at risk of unfair stigma


UK health secretary Sajid Javid said that the UK government will be stocking up on vaccines that are effective against monkeypox. The UK currently has about 5,000 doses of smallpox vaccine, which has an efficacy of around 85% against monkeypox.

Are there drugs to treat it?

Ed Feil does not work for, consult, own shares in or receive funding from any company or organisation that would benefit from this article, and has disclosed no relevant affiliations beyond their academic appointment.

2022-05-23
Previous Post: Five facts about the gruesome beauty of solitary wasps
Next Post: Philippines: the challenges ahead for the new president Marcos