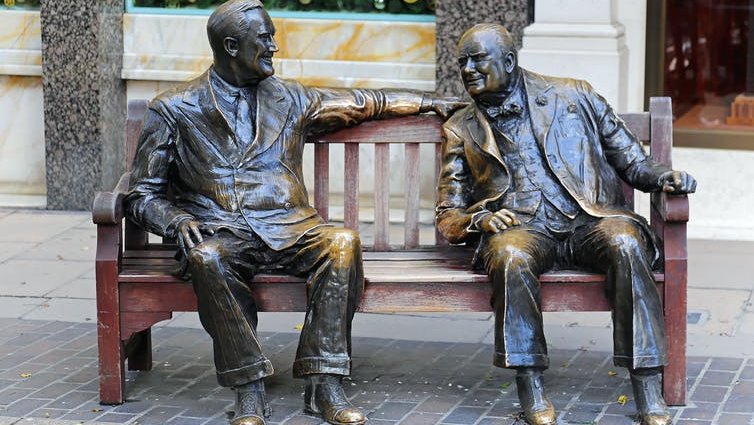 Even before Russia launched its invasion of Ukraine in February 2022, western governments – and especially the United States – were providing the country with military aid. This followed Russia’s annexation of Crimea in 2014 and the conflict which has ranged since then in the Donbas province in the east of the country. Western assistance has included advanced weapons systems and training for Ukraine’s military.

The Biden administration has provided more than US$53 billion (£43 billion) in military and humanitarian aid to Ukraine, including Javelin anti-tank missiles, Stinger anti-aircraft missiles and highly advanced drones specially designed for Ukraine and this conflict. These have all played a significant part in Ukraine’s so-far robust defence against Russian aggression.

Given the intensity of the fighting and the scale of the attacks on Ukrainian cities and villages by the Russian armed forces, the continued supply of increasingly heavy weapons to Ukraine faces several obstacles. The most immediate is logistics, most weapons are transferred to Ukraine through Poland either by rail or air transport and these supply lines are vulnerable to attack.

Another issue is that some of the heavier weapons systems (artillery, armoured vehicles and air defence systems) require some training of Ukrainian forces before they can be used in battle. There are also legal and procedural issues. The president can only spend funds appropriated by Congress, and if weapons are sold or transferred to Ukraine they are subject to the Foreign Assistance Act (FSA) and the Arms Export Control Act (AECA).

The FSA puts strict human rights conditions on the provision of both non-military and military aid. The AECA requires certification by countries receiving arms or military technology that the weapons are used either for internal security or self-defence and will not be used to escalate a conflict. These requirements create bureaucratic obstacles to each arms shipment and, given the ambiguous phrasing of the law and the fluid nature of the conflict in Ukraine, potentially put US manufacturers at risk of prosecution.

The solution by the Biden administration to introduce a new lend-lease agreement is a very imaginative way to get around some of these bureaucratic and procedural issues which could otherwise risk significant delays to the delivery of this aid. The Ukraine Democracy Defense Lend-Lease Act specifies that arms deliveries to Ukraine are exempt from various conditions laid down by the two acts relating to human rights conditions and the requirement to pay for weapons and other assistance provided.

The basic principle of lend-lease is that arms supplies are not sold or donated, but rather provided on the basis that they will eventually be returned to the United States. But in this case, the US government is bypassing the usual regulations governing such transactions by accepting that there is no guarantee that any of the equipment will actually be returned or paid for after the end of the conflict. The administration expects that the new law will considerably reduce the delay in weapons actually reaching the Ukraine military.

Echoes of the second world war

The lend-lease act echoes a similar law that was put in place during the second world war to provide aid to the European countries including Britain and the Soviet Union fighting Nazi Germany. The Act to Promote the Defense of the United States enabled the provision of food, oil and all kinds of military supplies including warships and planes to the United Kingdom, the Soviet Union and other allied nations, free of charge.

A total of US$50 billion worth of goods was shipped between 1941 and 1945 – the equivalent of about US$695 billion today. With the exception of a few warships, none of the supplies were returned after the war. Unlike the 2022 Act, the original lend-lease law was specifically put in place as a means to promote the defence of the US itself.

But the purpose of the 1941 law was similar: to circumvent legal restrictions on the provision of military aid. At that stage, public opinion in the US still opposed direct participation in the war and the neutrality acts prohibited arms sales on credit or lending money to other countries involved in armed conflicts. But Britain faced enormous financial problems and was in dire need of military supplies.

While both lend-lease acts served similar purposes, Roosevelt was facing much greater legal obstacles to providing military support to Europe. The agreement was the first step for the US to enter the war, which it did formally following the attack on Pearl Harbour.

The situation currently facing the Biden administration is somewhat different, as the main purpose of the 2022 act is to facilitate and accelerate the provision of military supplies to Ukraine. But the administration remains determined not to become a direct participant in the conflict.

For now, western arms supplies have played a crucial role in Ukraine’s defence. The significance of the supply of advanced US weapons is increasing as Russian forces try to regroup and and develop fresh offensive options. Whether the weapons supplies will be enough to enable Ukraine to prevail and compel Russian forces to leave its territory remains to be seen.

Christoph Bluth does not work for, consult, own shares in or receive funding from any company or organisation that would benefit from this article, and has disclosed no relevant affiliations beyond their academic appointment.

2022-05-13
Previous Post: Finland and Sweden’s desire to join Nato shows Putin has permanently redrawn the map of Europe
Next Post: How we captured first image of the supermassive black hole at centre of the Milky Way